Plants of the Ryukyu Islands (琉球の植物) – Thru Sunday June 5th at the Tsukuba Botanical Garden 31 May, 2016 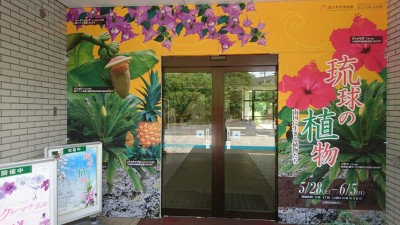 The entrance to the Tsukuba Botanical Garden done up in tropical colors for the “Plants of the Ryukyus” event May 28th-June 5th 2016. But don`t let the entrance fool you – there are no big tropical flowers in this particular exhibition (though there are plenty to be seen at other place in the garden)

Anyone interested in traditional Japanese culture, the tea ceremony, flower arrangement, literature – especially poetry – must study this country`s trees, plants and flowers – when they bloom and blossom, when they bear fruit, what their uses are – are what they symbolize.

And it always amazing me how the Japanese DO know they flora.

Few people from Japan`s Main Islands though, will be able to recognize any of the specimens on display at the “Plants of the Ryukyus” exhibition being held Tsukuba`s Botanical Garden this week 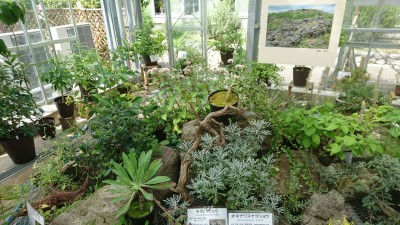 Plants that grow on the Ryukuyus` rocky areas

Until visiting the exhibition and reading its explanation boards, I had been under the impression that the Ryukyus referred only to the Okinawan Islands. I learned, however, that the name applies to a much wider area and many more islands – all 200 or so (some of them currently being claimed by China), that lay between the island of Kyushu and the island of Taiwan. (Could this not be another goal of this exhibition – to create awareness not only of Japan`s bio-diversity – but of the extent of its territorial integrity?)

Except for the northernmost of the islands (notably the spectacular Yakushima, a world heritage site) thse islands are warm, even in winter – in other other words, they have a subtropical climate. (One reason , besides geographical and historical remoteness, that the flora of these islands remain alien to most Japanese – to whom the four distinct seasons of the Mian Islands, is a cornerstone of cultural identity.)

Dry and rocky coastilines, narrow valleys flooded by rainy seaons downpours and seasonal typhoons, mangroves forests…. there are palnts that have adapted to all these ecosystems – and that is why the Ryukyus have some of the greatest species diversity in all of Japan. 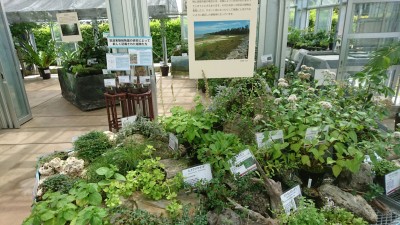 Coastal plants of the Ryukyus

The exhibition is divided into two parts – a room full of posters and explanation boards, and a green house full of plants.

Interstingly, the first three posters encountered show how the Ryukyus – and Japan`s Main Islands, were part of the Asian Continent till about 3 million years ago. 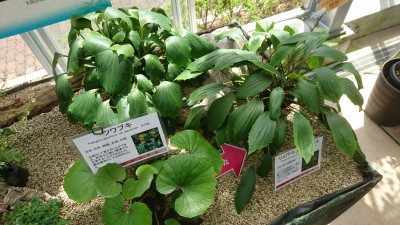 Another section of panels tells us how the flora of the Ryukyus resembles Okinawa`s most famous local dish – champuru – which means a mixture. You see, the Ryukyu flora is made up of species that have arrived in on way or another from Japan`s Main Islands, Taiwan, Mainland China, Malaysia, Indonesia, and even Australia. 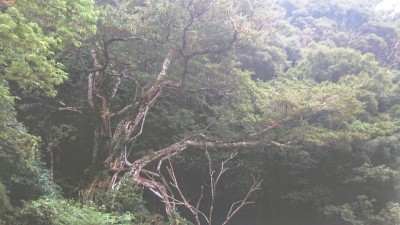 The KAJUMARU (Ficus microcarpa ) has been considered sacred throughout the Ryukyus since ancient times.

The real life plant in the green-house (which you actually get to before the poster display) proved far less spectacular than most visitors probably expect. Nothing very big – and very little color. To appreciate it fully you have to look long and careful..

I spent a good hour sitting  there in the green-house, reading a book, taking in the air – filled with the frangrance of all the rarified and diverse Ryukyu flora.