Midnight Gunshots Fired in Tsukuba – Not at G-7 Ministerial-Meeting Related Sites, but at the Local Yakuza Office! 16 May, 2016 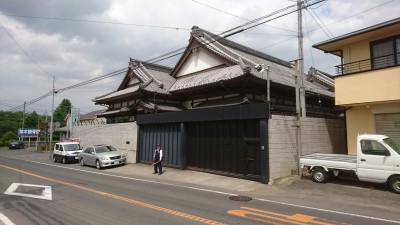 The headquarters of the Matsuba Kai, Tsukuba`s officially registered Yakuza group, was raked with gunfire sometime during the first few minutes of Monday May 16th 2016. Police found seven bullet holes in the main-gate and reported that the two people inside at the time of the shooting were unharmed – This incident occured despite the huge police presence in the city here to provide security for the G7 Science and Technology ministerial meetings.

The Tsukuba City Police Department was been reinforced with hundreds of extra officers for the May 15-17th G7 meetings being held here. Their intimidating presence is felt at every corner, behind almost every tree of central Tsukuba. How ironic, then that the worst firearms attack in the city`s history took place a few hours after the first day of meetings came to an end – and was unconnected to the G7 – it was a Yakuza vs Yakuza!

At ten minutes past midnight, Monday May 16th, someone from Tsukuba`s Sasagi neighborhood, called the 110 emergency hot-line claiming : “I just heard gun-fire!”

When police arrived at the scene, they found seven bullet-holes on a big iron gate (see photo above) outside a large house. There were apparently two people inside of the attack – neither of them, according to the police,injured.

As the sun rose over the city, news of the shooting spread fast. Everyone assumed, quite naturally, that the incident had something to do with the G7 meeting, for which so many police reinforcements had been brought in.

But once again, the facts showed us that you should never assume ! The house that was shot out was the Tsukuba Headquarters of the Matsuba Kai, Tsukuba`s officially registered “violent group” – in other words: the local Yakuza.

Apparently there was a shooting at the Matsuba Kai office in Tsuchiura (Tsukuba`s next-door neighbor to the east) earlier this month (on the 10th to be exact).

The G7 meetings schedule was unaffected by the incident- but since the shooter is still at large, as a precaution, all elementary students will have to gather at assigned locations, and walk to school in groups! Until when they will have to do this, I`m not sure.

Those of you who have read Junichi Saga`s classic “Confessions of a Yakuza” might be interested to know that the Yakuza whose story is told in that book belong toand then headed a group that was later absorbed by this very same Matsuba Kai – whose main office is in Asakusa.