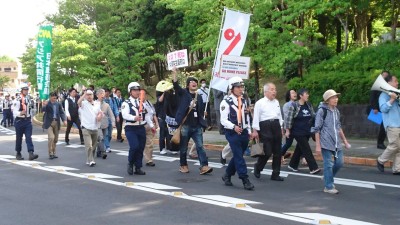 A couple of dozen anti-G7 Demonstrators being escorted through central Tsukuba today by policemen many times their number – through loudspeakers (turned up to 11 !) they chanted such slogans as – Death to Capitalism, Make the rich pay taxes, Make the corporations pay taxes Disband the G7, IMF, World Bank, etc. No science for military purposes! and – Why does Japan always have to side with the rich? The signs they carried bore more polite language: Ministers – please leave!

Despite being a little on the windy side, it was a beautiful day today. That`s why I decided to walk to Tsukuba Center instead of taking the bus. And during the entire 20 minutes that it took me to get to where I was going, I watched something soaring high over head. Not off into the distance, but in circles, directly over the center of the city. I knew it couldn`t be one of the eagles mentioned in classical Japanese poetry (1,300 years ago) – those that lived on Mt. Tsukuba. They disappeared from this area long ago. Nor could they be one of the hawks that I used to so admire circling over Tsukuba when I first came to live here – they left the area after the woods in which they nested were cut down ro make shopping malls and parking lots.

The drone and rumbling that reached my ear each during the brief breaks in traffic noise, informed me that it was no organic bird I was watching, but a chopper- a helicopter of some sort. Since today was the first day of the G7 Science and Technology Ministers Meetings in Tsukuba, I assumed that it must be there for summit. Perhaps a control helicopter coordinating all security activites down below, or maybe it was just hovering overhead, at the ready, in case there was an emegency of some sort. Then again it could have just been from NHK, or one of the networks . I`m not sure – I was too afraid to ask. 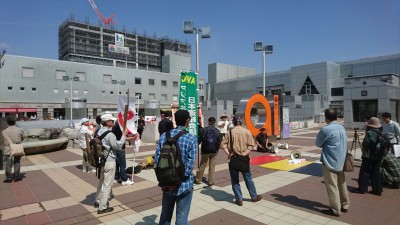 As small group of Demonstrators listening to speeches before the march began. The number of policemen, both in uniform and plain-clothes far outnumbered the number of protesters – no need for tear-gas or water cannons. An even more agressive method was used against the radicals – Radio Tsukuba being broadcast over loudspeaker while the speeches were being made – creating a cacophonous jumble at the Tsukuba Center Square.

When I got nearer to the Tsukuba Center TX Terminal, I was surprised by the sheer number of policemen who had been brought for summit security. They were there in force at every corner, with shields and batons – looking absolutely bored. I climbed the stairs to get to the elevated promenade between the Seibu Department Store and the Okura Hotel. More clusters of policemen – and more clusters of men in suits – ear-phones in a single ear – Plain-clothes officers ! They were all looking in one direction- toward the Okura. Some of them had note-pad and pen in hand. There was a continuous chatter in the air and I assumed that it was the inane banter of some Radio Tsukuba DJ that is usually played loudly around there over speakers. But then I realized that it was not only the radio- there was a little demonstration going on. A handful of people were holding up placards as they stood around someone holding a mic and making a speech – while Radio Tsukuba also blared away. 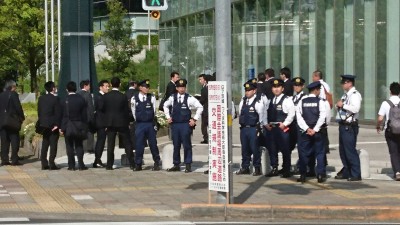 Police presence. Every corner in central Tsukuba was crowded with officers – in uniform and plain-clothes. They all looked terribly bored.

Meanwhile all the officers, whom I assume were from a variety of law enforcement agencies (I was afraid to ask them directly) were glaring at the demontrators – from all around at from many distances. Many were taking careful notes and others took photos. I wonder if the demonstrators made any converts among the cops? Who knows.

What made the officers` job easy (and deadeningly boring) today was the lack of pedestrians. I assume that many people were discouraged from coming to the area by warnings of tight security. Unfortunately this also meant that shops in the area were almost empty.

When the demonstrators began to March, escorted by policemen many times their number, I tagged along by bicycle…..I mean.. it was a Sunday… and we haven`t had this much excitement aound here in ages… so, with nothing else very pressing to do I followed the procession around central Tsukuba. Some plain-clothes officers (and they were in all kinds of disguises -only the tell-tale single ear-phone gave them away!) took note of me – the only non-marcher following the march. I think one of them photographed me for their files.

Even all that excitement got boring after a little while – and with mysterious helicopter hovering overhead, I walked back home. 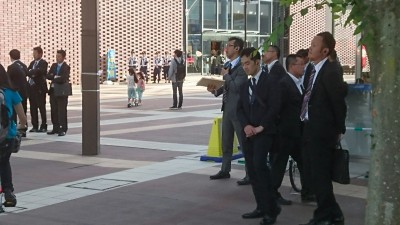 Plain-clothes officers listening intently to the anti G7 speeches – some of them seemed to be taking careful notes.

To be continued… as I report on the second day of the summit – from the streets of central Tsukuba – having no idea what is being discussed inside the cordonned off conference hall. 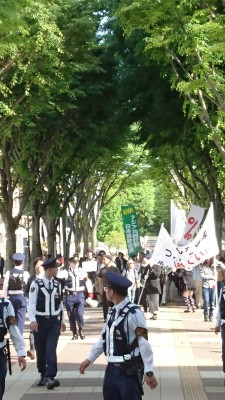 Last night there were shots fired about 4 kilometer from the meeting site. It turns out though that there was no connection to the G7 event – it was an attack on the local Yakuza office, apparently part of the continued gang wars that have wracking Japan over the past few months.

The helicopter was overhead again all day. Its starting to drive me crazy! And the huge police presence is intimidating and really turning people off. The shops around Tsukuba Center have been pracitcally empty for the second consecutive day. I spoke with some proprietors in the area and they were all very disappointed. They had been told that the Tsukuba meeting were part of Prime Minster Abe`s regional revitaization program – but the Tsukuba G7 meetings are apparently having the opposite effect – driving business away ! The area around the center is like a ghost town filled with police – and there were no trash cans around! 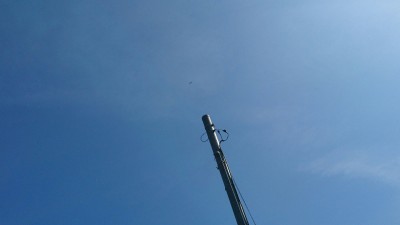 If you enlarge this picture you will be able to see the mysterious helicopter that circled over Tsukuba Center all day today. By the end of the second day the incessant drone has me going out of my mind! 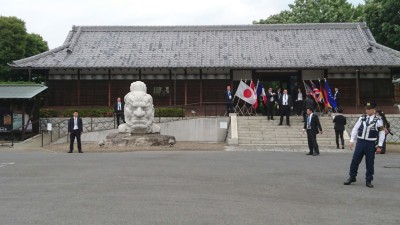 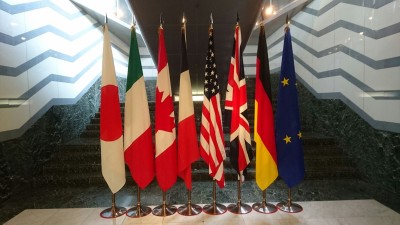