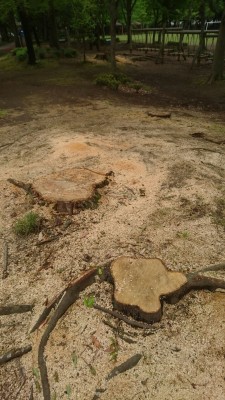 As the Tsukuba G-7 meeting of May 15-17 approaches, Workmen have been busy cutting down trees – lots of them. When asked what`s going on, the men doing the job say “It`s for G-7 security.”

A friend of mine called me in consternation. “They`re taking away the trees at Doho Park ! They say it`s to provide security for G-7 ministers who want to jog there during their stay in Tsukuba for the summit !” The caller, who lives in Ninomiya, Tsukuba, just across the street from what is Tsukuba`s largest park (20 ha) and one of its lovelist spots, said that the destruction had been going on for days already. After I got off the phone, I immediately got on my bike and headed towards the park .

Officially opened in 1980, Doho Koen (Doho Park) is  a good place to get an idea of what the long north-south strip that is now the “Science City” looked like before it was turned into the “Science City” – a string of marshes and dense woods. It`s also a good spot (great, even) for bird-watching (there are kingfishers there!). And with an indoor pool, gymnasium, some lighted tennis-courts and jogging courses, it is one of the areas most important recreational facilities. It is also a veritable arboreum, with an exciting variety of trees – gingko ( a favorite spot for picking their stinky nuts), cherry, pine, zelkova, Japanese oak, etc. 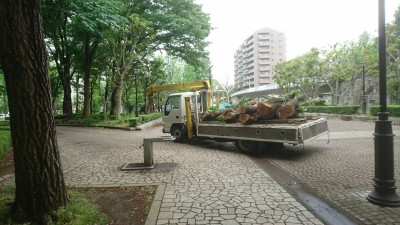 Day after day during the second week of May there has been a continuous stream of trucks coming out of Doho Park carrying out freshly cut down timber.

On the way there, I passed flooded fields with beautiful rows of freshly transplanted baby rice plants just barely jutting out of the waters mirror-like surface. Many thoughts raced through my head….Cutting down trees in Tsukuba…. nothing surprising there! Though promoted as a “green city” by real-estate developers and the tourist office, Tsukuba City and various developers (especially Daiwa House and UR) have been very actively and systematically eradicting its trees. Huge sums have been spent on this vast project.

This means that the large tracts of lowland forest that once covered the area (and which often appear in advertisements for real-estate) are almost all gone (and they will be completely lost in the next few years)- so all we really have left are the roadside trees and those in the parks (which are, I must add, varied and abundant).

Even while the fact that trees were being cut down in Tsukuba did not surprise me at all, the reason for the latest assault, as given by my friend, seemed preposterous ! Cutting down trees for the G-7 Science and Technology Ministers meetings ?! Cutting down trees for security?! I am certainly not an expert on security, but don`t trees provide cover from bullets, shrapnel and explosive concussion? I might be wrong but do they not provide protection? And then there is the question – do the European Science and technology Ministers want trees cut down for them, especially here in Ibaraki Prefecture, Japan`s second least tree-covered prefecture (after Osaka Prefecture)? 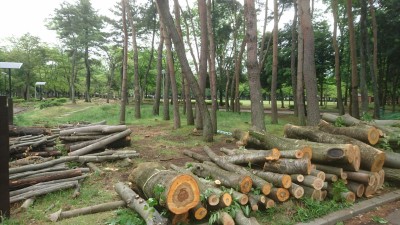 So the question that must be asked is – why would so much money be spent on cutting trees down for potential joggers among the G-7 Ministers? Does clearing trees provide security or make the visitng VIPs more vulnerable? Or is this just another way for politicians and bureacrats to funnels large sums to their buddies?

Before entering the park, established in 1980 using the remains of the old Doho Marsh, I could already see the convoy of trucks carrying out the felled timber. Crossing the road and entering the park I started counting fresh stumps, one..ten, fifty, one hundred….. Some workmen pass by. I hail them . ” Excuse me….Why are you cutting down the trees?” Then, after mimicking a crazed terrorist firing a machine-gun and going tat-tat-tat-tat-tat, he said “The Summit ! Security!” 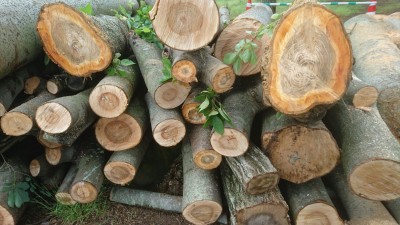 Doho Park before the Tsukuba G-7 meeting. If the Japanese Minister of Science and Technology visited Europe or North America, would those countries cut down the trees in the local park for them?

Don`t get me wrong…. there are still plenty of trees in the park – in fact, if I didn`t tell you about this you might not even notice all those fresh stumps. But still we have to question the people to decided to spend what must be a quite a bit of money allotted for the summit preparations on cutting down all those trees – many containing the spring nests of birds who came to the park – one of the last remaining refuges for them in the area.

So visiting ministers and others here for the summit – please enjoy our beautiful park – for a stroll, a jog, or a glimpse of a kingfisher – but don`t forget to take note of all the fresh stumps – they have lost their trunks just for you !

And sorry to disappoint all of you opponents of Kenichi Ichihara, Tsukuba`s scandal-besieged mayor – the blame cannot be put on him for this one ( at least I don`t think so!). Doho Park is not run by the city, but by the prefecture!