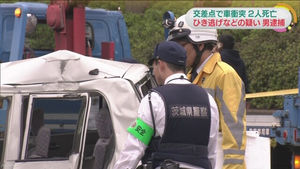 Police at the scene of a deadly traffic accident in Yatabe, Tsukuba.

Canned drinks and bouquets of flowers left by the roadside are a chilling sight. They signify the fact that a deadly accident has taken place at the spot – and the offerings have been left by friends relatives or strangers as a way of showing sympathy and consoling the spirit (s) of the dead.

Unfortunately, in Tsukuba, where the roads are wide and straight and seem to call out for fast driving, one often sees these sad reminders of lives ended too soon.

(and please don`t pick up the fresh flowers and take them home! Once my uncle, my he rest in peace, was visitng me in Tsukuba, and unfamiliar with the Japanese custom came home with a beautiful bouquet saying “Look! I Some just left these nice flowers laying out by the road!” )

This past Saturday (the 23rd), I was on my way to the Shoji Clinic in Yatabe and noticed (with a shudder) and unusual number of beer-cans (unopened) and flowers by the big intersection where the old Yatabe City Office until recently stood.

Then, on my way back, there were patrol cars – and lots of police. I noticed, while stopped at the traffic light that they were surrounding a man in his late 20`s, and he seemed to be trying to explian what had happened .

Later, I would learn the details of the incident.

At 2:35 AM on the morning of the 23rd, they was a terrific collission at the same interesection where I had seen the flowers. Two men, drivers for a DAIKO taxi service on their way back home after dropping off a fare in Joso City were killed instantly. The driver of the other car (what is Japan is called a one-box type vehicle) fled the scene -leaving his car behind. 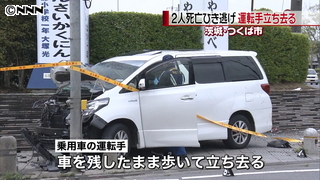 After the fatal accident, Masakazu Kikuchi, the driver of this “one-box” type car, fled the scene. After turning himself in he told the police that he ran away because he “saw the bodies laying there and got scared”.

Later in the day, Masakazu Kikuchi (28), a company worker who lives in Gakuen Minami, Tsukuba, turned himself in at the Tsukuba Central Police Station. He was arrested for fleeing the scene of an accident.

The media quoted him as saying when asked why he had fled – ” I saw then laying there and I got scared..”

The two men who died were Naoki Koshiba (35) of Kami Yokoba in Tsukuba, and  Akiyoshi Sagisaka (57) of Tsuchiura.

The deceased worked for a DAIKO company – which is a unique service provided in Japan for those who have been drinking and cannot legally drive home. When summoned, two drivers will arrive in a single to pick up their fares at the appointed spot – one will get into the customer`s car and drive it, while the other will driver will follow that car to its destination and then drive his colleague back home. You can ask them to drop off other people on the way – and it is surprisingly cheap – much more so than a usual taxi (because of different types of insurance required).