Tsukuba`s Research Institutes and Related Facilities OPEN TO THE PUBLIC (April 18th-24th 2016) for the 57th Science and Technology Week 19 April, 2016 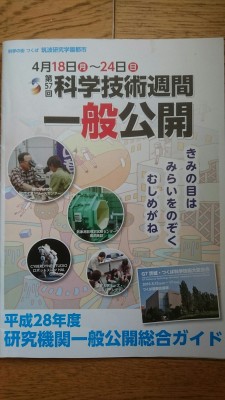 Monday April 18th- Sunday the 24th
The 57th Science and Technology Week
OPEN TO THE PUBLIC
“See the Future through a manifying glass!” This is the cover to the 2016 event guide with info on the 29 participating facilities participating in one of Tsukuba`s most important “festivals”.

In 1963, the Japanese government selected an area just south of Mt. Tsukuba to be the site of a large Science City – modelled after the Soviet Union`s vaunted Akadem Gorodok (near Novosibirsk). Not only was the target area (mostly along and between what are now the broad thoroughfares called Nishi and Higashi Odori) flat- it was also sparsely populated woods and marshland which could be cut down and filled in (some of this original environment can still be found on the grounds of certain national research institutes). Most importantly for the selection of Tsukuba over the other candidates was the proximity of a large lake (Kasumigaura), which would be able to supply the water for a future city that was envisioned to be the home of a few hundred thousand new residents once the city was built. 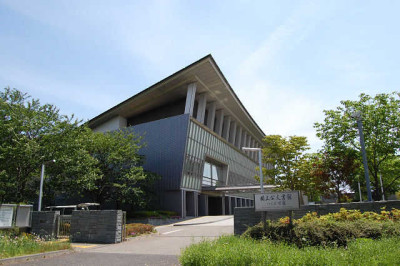 The Tsukuba Annex of the National Archives will be open to the public every day this week – making it possible to ogle some important historical documents www.archives.go.jp

Now more than 50 years later, there are dozens of national and private research institutes located within Tsukuba City – with most of them located along the two main roads I mentioned above and Route 408, which runs from central Tsukuba south towards neighboring Ushiku. 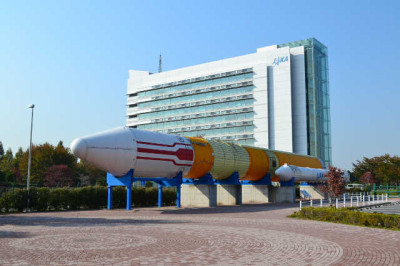 Probably the most popular science related attraction in Tsukuba is the Space Agency JAXA`s facility.

Many of these facilities – Jaxa (the Space Agency) and the Geographical Survey of Japan (Kokudo Chiriin) can be visited on weekends – or perhaps any day of the year. There is even a “Science Bus Tour” which runs out of the Tsukuba bus terminal at Tsukuba Center and takes visitors to some of Tsukuba`s more interesting facilities. 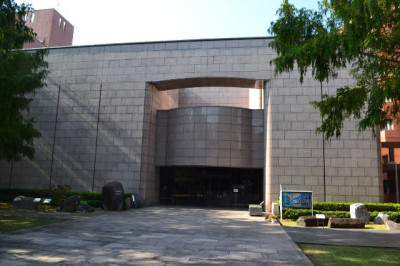 But many people – especially those with kids – look forward to one week in April in which not only are dozens of facilities opened to the public, but have also prepared interestic special displays, attractions, and GIVE-AWAYS for visitors.

It is a great chance to see how the governement is spending all that tax-money (and there are some researchers who dread the visitors who complain when they realize just how much money is wasted (in their opinions) in ridiculous and useless ways! 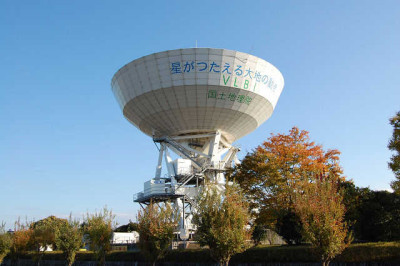 This giant parabola antenna which is located on the grounds of the Geographical Survey of Japan (near Tsukuba University) is a Tsukuba landmark – and no, it is not being used to try to contact alien life in space. Rather it is for measuring, by use of satelittes, minute movements of the Earth`s landmasses.

I looked at this year`s schedule to see what looked interesting and found some things I`d like to try to get to.

Let me give a list of some of the 29 facilities (my selection) you can visit this week (though unfortunately, because of mergers, many of the Agricultural Research Institutes (famous for their good give-aways – and food) will not be participating in this year`s Open-to-the-Public events:

The National Museum of Nature and Science has a large facilty in Tsukuba that is not usually open to visitors. Saturday the 23rd will be your chance to see just what kind of specimens (zoological, geological, etc). they keep stored in there. I don`t know about you, but I`m curious! The fact that they let visitors in only ONE DAY A YEAR makes it enticing! Just south of the botanical garden on Higashi Odori.

The National Institutes of Biomedical Innovation, Health and Nutrition (NIBIOHN) will be open to the public on the 21st. Since I`ve never even heard of the place before, I will probably go and check it out. They apparently have greenhouses full of medicinal plants! It is located along Science Odori somewhere!

JICA (Japan International Cooperation agency) located near route 408 on the way to Ushiku, will be open on Saturday the 23rd from 10AM to PM. Enjoy meeting people form around the globe, tasting “ethnic” foods and the coffees and teas of the world, seeing a movie “Crossroads”, and finding out what kind of projects they are working on.

The High Energy Physics Laboratory (KEK) will have special events on the weekend – you can have a special look at its famous particle smashing facilities.

The Public Works Research Institute (Doboku Kenkyusho) will have three different courses you can join on Friday the 22nd. Learn about dams, enter an experimental acoustics chamber or run on some sort of experimental road.

The National Institute for Earth Science and Disaster Resilience (NIED – BO-SAIKEN) might provide some tips that come in handy some day in disaster prone Japan- will be open to the public on Sunday the 24th, from 10AM to 4PM

The Campus of the Tsukuba University of Technology`s Kasuga Campus will be open to the public on Friday the 22nd. Learn about the latest technology being used to help the visually and hearing disabled

Many of us who live here in Tsukuba, work at these institutes full or part-time as scientists, teachers or translaters. Some of us take advantage of their tennis courts gymnasiums or soccer fields. Anyway, anyone who comes to Tsukuba even for a day will pass by several of these imposing and structures.

They take so much of our tax money (and also spew out lots of waste into our air!) – now`s is your chance to see a bit of what goes on inside – and have a unique Tsukuba experience!