Sumo Wrestlers Still Making Their Rounds Out to the Provinces 12 April, 2016 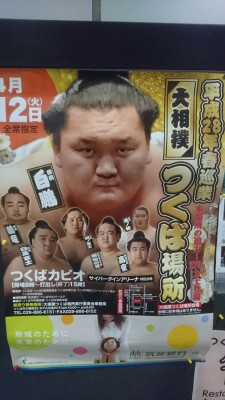 A troupe of travelling Sumo wrestler -among them, some of the best in the business, fought in matches at Tsukuba`s Capio Hall today (April 12, 2016)

I was walking past the Tsukuba Okura hotel today, talking on my smart-phone, when I saw something that stopped me in my tracks – and got the person on the other line wondering what had happened to me. I stood there with phone against my ear and jaw hanging open as I watched a figure getting out of a taxi. With a large chubby face, black-hair greased back in a top-knot, colorful yukata robe and sash and massive girth, it was an instantly recognizable – even iconic image, though not one I was expecting to have cross my path today in Tsukuba – a SUMO WRESTLER – with one spicy twist – a  young girl hanging on to his arm, sexy, frisky, and looking very slender and petite next to her hefty beau.

The scene reminded me of section from a book I have recently translated, a book that brings to life a time when life out in the country was simple and one of the few entertainments there and when travelling Sumo troups were the thrill (or the shock) of a life-time.

Here is an excerpt from Dr. Junichi Saga`s

REMEMBRANCE OF VILLAGE DAYS PAST

One year in autumn, a group of sumo wrestler touring the provinces came to hold a day of matches at the open field in Inagota, where Cho-emon lived.There was great excitement all around as the single-file procession of RIKISHI approached the village, plodding slowly towards us down the country-road that connected Anju with Kihara. Thinking back on it now, I realize that there could not have been more than ten of them. It must have been a team of lesser-ranked wrestlers who were part of a larger group touring the area. Still, I had never seen men that large before in my life. At the head of the procession someone carried a banner, and behind him all the wrestlers lined up in a row had faces like giants, with their flesh jiggling as they moved heavily along, looking alternately from the right to the left, again and again. We were all so astonished that it must have looked as if our eyes were popping out of our heads. As for me, I felt as if my liver were about to burst! The wrestlers were all barefoot, and though the autumn winds had already turned chilly, they were dressed only in thin, single-layered gray YUKATAs.

There were also some smaller men who`d come along with them. They pulled the baggage carts and beat the drums.

That night they were going to stay at Jirobei`s house in Yaita, but before they set out for there, they made the sumo ring and constructed a simple outdoor “arena” out at Inagota. Straw mats were laid out all around the ring and a ticket booth was put together, just like the one the theater troupe used to make.
It was Grandpa who took me took to watch the matches. And while practically the whole village would come out to see the theater-troupe, for the sumo, there were only about thirty “fans” –  all of them men.
The “announcer`s” voice was high and shrill. He made the introductions. It seemed as if all the wrestlers had names that ended in YAMA (mountain). So he`d announce “whatshamacallit Mountain versus whoshamacallit Mountain !” Then two very large men would step up respectively to the east and west sides of the ring. Their abundant flesh rippled in waves and their buttocks were like the shanks of cows. They proceeded to repeatedly toss salt into the air. The wind blew in from the lake, causing all the colorful banners that had been raised for the occassion to flutter noisily. As I watched the wrestlers go through their preparatory rituals, I wondered what was going to happen next – I was really very excited. That`s because at that time, I had no idea of what sumo actually was. I had never seen it or even heard anything much about it. I don`t think I had ever even seen pictures of it. Nowadays, as a matter of course, young children or even infants get to see sumo on the TV, so they naturally understand that the wrestlers are ordinary, though much larger-than-average, human-beings. But for someone like me, who had no previous knowledge of what it was all about, the ferocious expressions, the wild breathing, the arms and legs thicker than tree-trunks, the violent grappling – everything I saw, made it hard to believe that it was a HUMAN activity.
The first thing I found strange, was the way the wrestlers tossed salt into the air. Before they entered the ring, the wresters would scoop some salt out of a basket with their hands – which were as big as fans – and then step up into the ring, where they would toss it. They did this not just once, but two or three times each. It seemed to me like a very curious thing to be doing, so I asked Grandpa what it was for.
“It`s done fer purifyin` th`ring, ay!”
But I still couldn`t understand. If the purpose was to purify the ring, wouldn`t one toss have been enough? I wanted to know why they did it so many times.
Another thing that terrified me was the referee. Standing between two enormous men who were getting ready to do battle, he cried out in a sharp and jarring voice. It was his voice that incited those men, larger than oxen, to plunge at each other, kicking up dirt and crashing together.
Then his voice would grow yet more urgent and rise higher in pitch as he shouted: “HAKEYOI, HAKEYOI” moving laterally, around and around inside the ring. To me, it sounded as if he were shouting: ” SA KOROSE. SA KOROSE ” (GO AHEAD, KILL! GO AHEAD, KILL !)
When one of the wrestlers felled his opponent, or pushed him out of the ring, the referee would twirl his special fan, raise it high, and then call out in what was almost a chant: “Whoshamacallit YAMA – is the winner!” positioning the fan so that it hovered over the victor`s head.  It was because of this overbearing shouting and gesturing that I took the referee to be a task-master who was forcing those men to do what they were doing. His clothes were very expensive-looking and his manners elegant. The way he acted reminded me of the feudal lords that I saw portrayed in the plays put on by the travelling theater troupe. But more than anything else, it was the fact that he had a sword in his sash that convinced to me that it was he who was controlling all those giant men. Yes, his costume was grand, but it was that sword that caught my eye.
With his knees bent and waist kept low – in a half-crouch of sorts, the referee kept repeating : “Wait…wait….wait…not yet…not yet….” with the sheathed sword in his sash pointing right in my direction. “Not yet…not yet….” Meanwhile the wrestlers were glaring at each other. With my eyes fixed on the scene, I grew more and more frightened. What would happen if the wrestlers disobeyed the referee`s commands and suddenly went at each other. I imagined that he would be furious – maybe even to the point where he would pull out his sword and slash at them. No, not maybe, I thought – he SURELY would !
“Wait…wait…wait…”
The sound of his voice indicated to me that if he were to be disobeyed, there would be no forgiveness.
Then, when he suddenly blared out “HAKEYOI !” the crouching wrestlers came crashing into each other with terrific force and began to grapple. “HAKEYOI…HAKEYOI..HAKYOI..” It seemed as if they were moving to the rhythm of his words as they struggled with what seemed like desperation – really as if their lives depended on it… as if they didn`t want to be cut down by the the referee`s sword. I imagined that they had seen many of their fellow wrestlers cut-down in that way and that was why they fought the way they did – so that they wouldn`t meet the same fate !
If that weren`t the case, why would they be there in that cold place wearing nothing but a loin-cloth and fighting so ferociously with each other.

Grandpa had told me that the reason the wrestlers tossed the salt was to purify the ring – and then it struck me ! I suddenly realized why they had to do it so many times – because heads had fallen and blood had been spilled. That must have been why they threw so much salt, they were taking care not to get any of the blood on themselves. Thinking such thoughts, I grew more and more terrified as I watched the referee .
When the wrestlers` names were called out indicating that it was their turn to wrestle, their faces seemed to freeze up in a grimace as they stepped up to the ring. Their breathing was heavy, and they nervously crouched and then rose, with their eyes darting about as if keeping a watch out for danger. And I thought I understood exactly why…. they were afraid of the referee . And having understood that, I began to grow so distressed that I couldn`t endure watching anymore.

“HAKEYOI !” the Gyoji shouted out in that high-pitch voice. The unique way in which he waved his fan around looked to me as if he were indicating that at any second he was going to pull out his sword. I couldn`t stand it anymore. I felt so sorry for the wrestelrs. It got harder and harder for me to breathe.

“Grandpa, let`s go home ! C`mon, let`s go now !” I pleaded.
“Hush up, ay !” he said, glaring at me. “The rest of the matches are all gonna be good ones.”
When I heard that, I became even more panicky – I was sure the time had come for the referee to draw his sword.
I pulled on Grandpa`s sleeve. “Let`s go home !” I said standing up on the straw-mats.
“What has gotten into you, ay?” he asked me angrilly. Don`t be such a  fool ! You might never have the chance to see anything like this again, ay ! Just calm down !”
A terrible thought then crossed my mind –  maybe Grandpa actually WANTED to see the referee pull out his sword and kill the wrestlers. So without a further word to him, I snuck away, darted passed the ticket-gate and  ran towards home, panting heavily. On the way I bumped into Granny O-Chika out on her egg-buying rounds.
“Why are you running like that, ay? Your`e all pale. What happened?” she asked.
“It`s the referee,” I said. “He`s dangerous ! He`s got a sword!”
“Ahah! So you`ve been at the sumo ! I don`t like it – not one bit. Too violent, if you ask me, ay !”
It was then that I understood for a fact that Granny O-Chika truly WAS a good person at heart.

When Grandpa got home that evening he told Mother : “Susumu couldn`t do it. He`s a real `fraidy-cat, he is. Couldn`t sit through the sumo no matter what I said to him.

I was relieved to find out later that no one had been killed. It was only afer I had entered the first grade that I found out exactly what sumo was. I never did grow to like it, though. So it was fortunate for me that when I was little, the travelling sumo troupe came to our village only once, and did not come again until much later.

It was much less popular than the theater, and it was only the village men who went to watch it – so I guess that`s why they weren`t asked back.