One Hundred Fifty Seven Tired Punctured at the End of Last Month in Kukizaki, Tsukuba 4 April, 2016 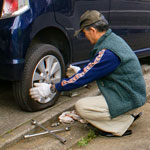 The morning after – March 29th, residents of the Sato no Mori neighborhood of Kukizaki, Tsukuba, had to do a lot of tire-changing as someone during the night had punctured 91 tires on 49 different cars. A few days earlier 66 tires had been left flat.

It was like deja vu all over again. Cars attacked in the night with what police say is an “awl-like object”. A whole neighborhood left with flat-tires.  I rememebered it happening when I lived in Konda, Tsukuba , years ago.

This time the perpetrators struck the southern-most end of our fair city, an area which is culturally more akin to Ushiku than Tsukuba (and was actually absorbed into our city as a type of gerrymandering – to increase the number of LOCALS (who would support Mayor Ichihara, as oppossed to NEW RESIDENTS (who would not).

Two separate incidents actually occurred at the end of last month – in Kukizaki`s Mori no Sato neighborhood (3,000 residents). First, on the night of the 25th-26th 37 cars were hit, with 66 tires punctures.

After an initial investigation , the Tsukuba Police Department announced that they believe the incidents are linked (Duh!)

The people of Mori no Sato are, of course, a bit shaken up by the puncture spree which has forced them to lay out nearly a million yen for new tires.

The MO is the same – and so is the city. Could the two incidents be linked – after a gap of so many years. Perhaps it is an inititiation rite for BOSOZOKU motorcycle gangs, or other some other group…. who knows?

Anyway…. we are getting TIRED of having Tsukuba in the crime-news.