Kumamoto Quake Brings Back Memories of 3/11 for Tsukubans – and Elicits Deep Sympathy for Victims 16 April, 2016 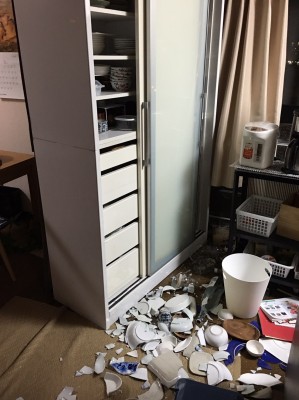 On Thursday night (April 14, 2016), I was at home in Tsukuba. My family was already in bed and I was taking advantage of the rare peace and quiet to get some work done on a translation. I had the TV on – though I can`t remember what was on exactly. It must have been the usual, though – either some food show – with the special guests tasting various dishes and then, with  satisfied looks on their faces, saying OISHI (delicious) or UMAI (delicious) , or the latest trend – shows showing how much foreigners love Japan (I guess things are so bad now that stuff like this is what is needed to boost people confidence – bizarre!)

Anyway, at about 9:30 (nine twenty-six, to be exact) I noticed one an alert of some sort at the top of the screen (in Japan there are INSTANT earthquake alerts whenever there is significant shaking anywhere in the country) – this time the seismic activity was on the Island of Kyushu -far off…. but it a way it wasn`t surprising…. there has been a lot of volcanic activity around there….

The TV alert also assured us that there was no danger of tsunami (How can they tell?) – the cause of the most horrific damage in 2011.

The station I was watching, then actually turned away from its regular programing to take us to Kumamoto. They showed footage for a permanently set camera at one of their Kumamoto branch office. The camera shook crazily and then by some wierd ( and very artistic) coincidence, it ended up stopping on the grand Kumamoto Castle (which I would later find out actually suffered some damage). Then we were shown scenes of the mess all the shaking created in the network office – and I was having flashbacks of what it was like for us here in Tsukuba five years ago.

In Tsukuba we all fell asleep that night, snug, warm, and stable – but in Kumamoto, things were still shaking – they still are. The TV , every channel, was surveying the damage – and interviewing victims.

I got some pictures from a friend living in Kumamto City… broken dishes, microwave on the floor… cracks in the wall…

and it all came flooding back…. the aftershocks, life with no gas, no plumbing and no electricity, the empty shops, the gasolineless gas-stations, the uncertainty…. the cleaning up

But one thing that gave us encouragement in those dark days following 3/11 was the help from friends neighbors and strangers- and the spiritual support, in the form of good wishes- provided by concerned people around Japan and the world…

So I just want the people in the affected areas of Kumamoto to know that we here in Tsukuba are with you in spirit – and wish you all the best for a quick recovery ,, though we know its going to take some time….

We can be thankful that this time the nuclear power plants were undamaged (apparently two had been turned off for maintenance).

But it seems more obvious than ever,,, when seismologists seems no closer to being able to predict large quakes……. that in this highly volatile archipelago…. there should be NO nuclear power plants ……. but…who am I to say , and what do I know… 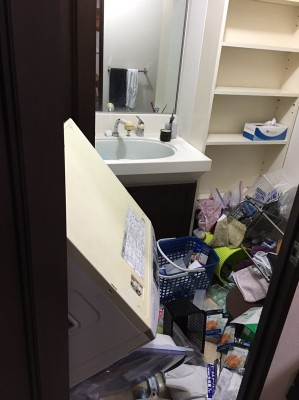 Everything on the floor after the intensity 7 quake in Kumamoto on the night of April 14th.