Full Day of Events Planned For Inauguration of History Park at the Site of the Once-Great Oda Castle (April 29th) in Oda, Tsukuba 28 April, 2016 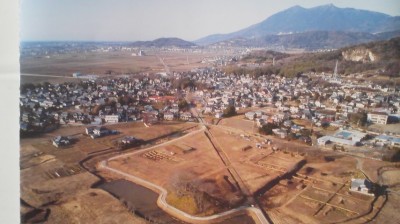 The site of the old Oda Castle, as seen from the air. The straight line running through it is the now defunct Tsukuba Railroad, later turned into the RINRIN road cycling path. The ruin has now been turned into a history park.

Now a quiet, though charming backwater, the Oda area was long the political, religious, cultural and military center of what is now the Tsukuba area. In fact, Oda Castle which at its peak had over forty satellite castles (DEJIRO) to protect it, was the only castle in all of Japan to have been ruled continuously by ONE FAMILY (over 15 generations!) from the beginning of the Kamakura Period almost right up to the Edo Period (1185-1569). It was first built by Hata Tomo ie, a close ally of Minamoto no Yoritomo (the founder of Japan`s first Shogunate in Kamakura). After moving into his new castle Hata changed his name to Oda – and thus you have Oda Castle.

After the Oda`s had finally been defeated, the warlord who had vanquished them the SATAKE`s, moved into the castle and stayed until 1602 when they were order by the new Tokugawa governement to move to what is now Akita Prefecture.

The castle was them completely dismantled.

An especially notable point in Oda`s history is that in the Kamakura Period the aristocrat,  scholar, and Imperial advisor Kitabatake Chikafusa (北畠親房 1239-1354) took refuge at Oda Castle for three years (during the dispute between Japan`s Northern and Southern Courts (1336-1392). It was there ( yes, in what is now Oda, in Tsukuba City) that he wrote his highly influential treatise the JINNO-SHO-TO-KI (神皇正統記), in which the writer asserted something which many later would repeat- that Japan is the Land of the Gods, since it had been ruled since time immemorial by the same imperial family. 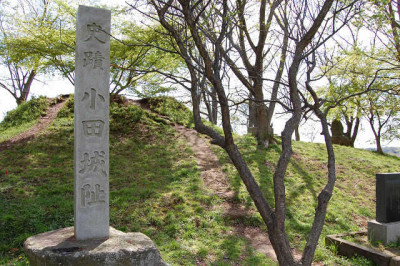 For hundreds of year the area around what had long been a center of power had languished in obscurity. Things got so back for the castle that the Tsukuba Railroad (now defunct) was built to run right through what was the site of its Main Tower. After the railroad went out of business, the old racks were removed and a bicyle path was created – few people who passed through the site were aware of what its glorious history.

Well, all that might start to change now, with the inauguration tomorrow of a history park on the site – with a visitors center offering displays and explanations on the history of the castle. 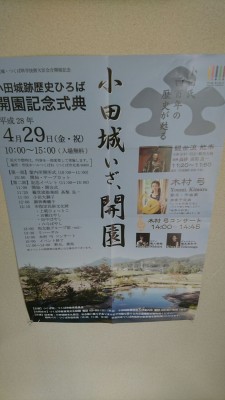 Poster for the April 29th event that will feature a Noh performance, lots of music and the unusual Oda Shishi Dance (usually performed in the July Summer Festival) The program will run from 10 AM to 3 PM

To get things kicked off there will be a full day of  interesting (well, at least they sound interesting) events.

Here is the schedule:

11:50 AM Oda`s unique SHISHI lion dance will be perfomed 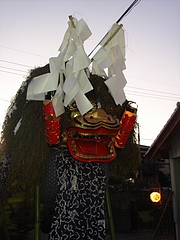 One of the masks from Oda`s SHISHI lion dance

12:15 Festival music from other traditional hamlets in what is now Tsukuba City (Kamizakai, Kise, Tanaka and Rokuto). 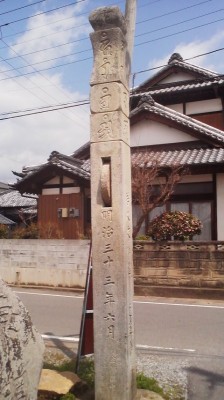 The Gosho-kuruma (後生車）- An old prayer wheel in Oda, Tsukuba. Turning it once gavethe same merit as reciting one whole sutra

You can get to Oda by taking the Tsukubus Oda Shuttle, or by bicycle- as the site of the old castle (nothing of the structure now remains) lies along the RINRIN road cycling path. If you go by car, you can go straight down Nishi Odori and keep going straight even when you pass the intersection where you meet higashi Odori (where the McDonalds is). You will then go down a slope and come to a bridge which passes over the Sakura River. Soon you will see a sign (after the first light) which indicates that you should turn left to Oda Castle (小田城跡). 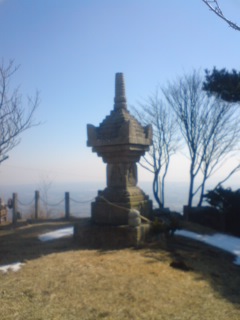 At the top of Mt. Hokyo-Zan (at 461 meters Tsukuba`s second highest mountain!) is this Kamakura Period Buddhist monument 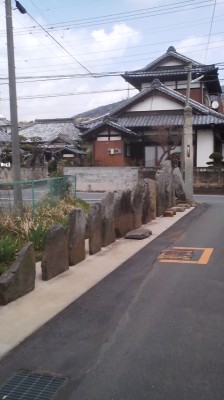 A row of old sacred stones in Oda, Tsukuba. Until a couple of years ago these stones had many offerings in front of them and were not lined up in aperfect row. New residents, however, complained about this, saying it was CREEPY(!) and the area was cleaned up- losing a lot of its special 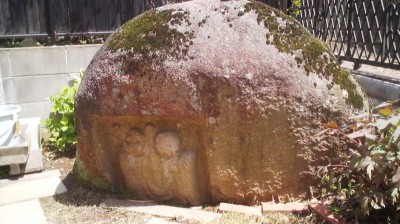 The DANGO ISHI- an interesting old stone (1594) on the grounds of a private home in Oda. There is a local legend attached to this stone which tells of how a respected local Buddhist monk ZUHAKU SHO-NIN had been brought up by the ghost of his mother, who would buy and present him with DANGO (rice dumplings)