Tsukuba born film director Yoshihiro Nakamura ( The Booth, The Snow-white Murder Case, The Inerasable, among a string of other works) will be the special guest at this year`s Tsukuba Short Movie Competition on Saturday March 5th from 1:30 (photo from Wikipedia)

Tsukuba is apparently not satisfied with just being a “science and academic city”. Well, at least Mayor Ichihara isn`t.  He has greater dreams – of making a name for Tsukuba in sports and the arts, as well. And though his idea of building a grandiose ( and obscenely expensive) sports facility was soundly rejected by a referendum last summer, he still has hopes though, of making Tsukuba into something of a mini Cannes, Sundance or Venice. It all began in 2014 with the first Tsukuba Short Movie Competition called the TSUKUPPE (つくっぺ) – which is how you say “Let`s make (something)!” in the local Ibaraki dialect. 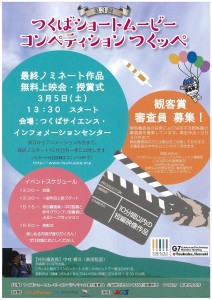 The flier for this year`s TSUKUPPE Short Movie Competition

Just how long IS a short movie? Thirty minutes? An hour? Well, those were the lengths that came to my mind when I first saw the event advertized. The funny thing is though, that the works entered into this competition have to be 10 minutes long or less! Should be called the VERY SHORT MOVIE competition.

Anyway, about 90 minutes worth of these little works (in various media and genre) will be shown this Saturday (March 5th) – and you can vote for the winner of the 100,000 yen prize (plus a free trip to Europe).

If that is not enough to grab your interest – this year`s special referee is going to be acclaimed film-director Yoshihiro Nakamura , who was born in Oda, Tsukuba. He will be leading a discussion after the audience has cast their votes on the best works.

Venue: Tsukuba Information Center (just to the right of the main entrance to Nova Hall- at Tsukuba Center)

The audience will vote on their favorite short-movies for 3:00-3:15

There will then be discussions and award ceremonies till 4:30.

Bad news – All in Japanese – (some might consider the fact that the mayor has made himself a judge, alongside Nakamura, another drawback! )