Yet Another Bloody Addition to Tsukuba`s Growing List of Murders as Woman Stabbed to Death in Azuma 4 February, 2016 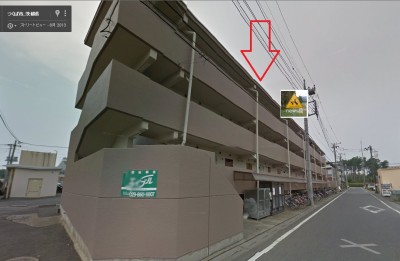 Miho Komatsu (28) was stabbed in the 3rd floor apartment she lived in Azuma, Tsukuba (just to the east of Matsumi Park). A few hours later she died of her wounds.

Just after 11  on the night of February the 2nd, a call came into Japan`s 110 emergency hot-line. A man reported that he heard screaming in the next apartment. It was a woman calling out for help saying : “Someone call the police!” The address he gave was in Tsukuba`s Azuma neighborhood located between Tsukuba University and the Tsukuba TX Terminal. Officers of the Ibaraki Prefectural Police Force arrived at the scene shortly afterwards (the police station is only a few hundreds meters away) and found the door to the apartment from which the screaming had come locked. After though, it was opened – by Hideaki Tano, aged 41, a company employee who lives in Mito. Peering inside the officers saw a woman lying on the floor face up, her chest covered in blood, unconscious, but still alive.

Miho Komatsu, the 28 year old resident of the apartment had been stabbed. Though the knife had quite a small blade – only 12 centimeters, it was still long enough to do severe damage. Miss Komatsu passed away at the hospital (also within a distance of about 100 meters) at 4:10 the next morining (Feb. 3rd).

Mr. Tano claimed that he had been involved in a romantic relationship with the victim. He also insisted that while he did in fact stab her, he had not intended to kill her. 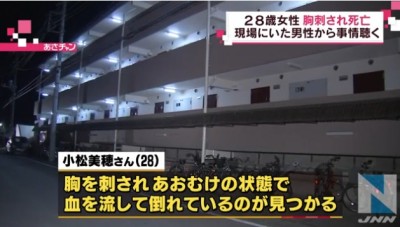 The apartment on the night of the stabbing

What makes this disturbing story even more disturbing is the fact that just last year (and it seems like just yesterday) a man was stabbed to death on a spot only about one hundred meters from this week`s crime scene!

It also means that the list of murders in Tsukuba (and the immediate area) continues to grow. I don`t plan on mentioning them all here, but the most notorious among these incidents are:

The assassination on July 11, 1991 of Tsukuba University Professor Igarashi- the Japanese translator of Salman Rushdie`s Satanic Verses. Igarashi-sensei`s throat was slit by the elevator near his office on the university campus.

The “Tsukuba Mother-Child Murder Case” of 1994 in which Dr. Iwao Nomoto murdered his wife and two children, wrapped them in plastic sheets and dumped them into Yokohama Bay and the murder of a 19 year old female student in May 1999.

The murder of a 19 year-old Tsukuba University freshman in May 1999 (she had just started school the previous April). Her body was found in the wood somewhere in western Tsukuba, and her killer was never found.

And this is not to mention the atrocious cases that have occured in recent years in neighborhoods adjacent to Tsukuba – in Tsuchiura ( a young man killed his parents and sister 2014), Arakawaoki (young man on a stabbing ramapage at the train station in 2008), and Ami ( a 21 year old female college student killed in 2004).

Something is obviously wrong somewhere (shouldn`t this be way too many murders in an area of this population in one of the safest countries in the world?Let`s just hope that there are no more additions to this gruesome list – for a very,very long time..