Yanaka no Mori (矢中の杜)- an Interesting Old Residence Designed with an Imperial Visit in Mind- now open to the public every Saturday 24 February, 2016 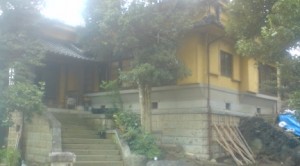 The old Yanaka Residence in Tsukuba`s Hojo, is open to the public for 45 minute guided tours every Saturday of the month ( at 11am, 1 pm and 3 pm)

Among the hundreds of thousands of Japanese who set out to seek their fortunes in Manchuria in the early 1930`s, was an intelligent and enterprising man named Ryujiro Yanaka (矢中龍次郎) who had grown up  right along the main commercial street of  Hojo ( now part of Tsukuba City) and had gone on to serve in the Imperial Army during the Russo-Japanese War. Making use of the unique characteristics of the soy beans which grew in what in now northern China, Yanaka invented a product which makes cement more water-resistant ( apparently there had long been a problem getting cement to dry properly in wet and humid places), which he called ( along with the company he founded)-  MANORU ( マノール), or as it is known as in English Manol (a name derived from the Chinese word meaning SUPERBOY- 万能児) This chemical agent, extremely useful for the construction industry, helped make him a nice bundle. 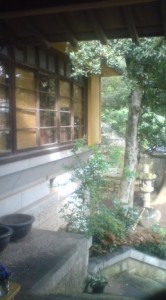 The exterior of the Yanaka Residence

Back in his hometown in the late 1930`s, with plenty to spend, Yanaka decided to build a villa-  one that would  be fit for a king – or more correctly, for a visit by His Imperial Majesty, whom the entrepreneur  ( as part of the times) naturally looked upon with great reverence . He imagined that perhaps on a visit to Mt Tsukuba, or to the great naval base which once stood on the shores of nearby Lake Kasumigaura, that the Emperor might need a suitable place to take a rest. 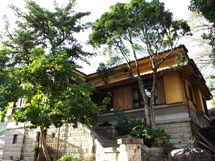 The Yanaka no Mori mansion in Hojo

Yanaka put his heart,soul, and vast knowledge of contemporary construction techniques into creating something worthy of such a visit.

At that time, for the Japanese upper-classes, the architectural fashion was a mix of western and Japanese elements, and naturally this is what Yanaka went for. 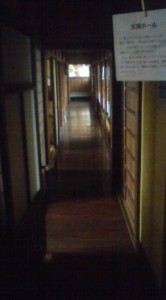 A corrider at the old Yanaka Residence in Hojo

As we all know, however, things dont always turn out as we plan. And because the course of the Second World War ( and the empire itself ) took a sudden turn for the worse ( for the Japanese) and then went into what could be described as a downward spiral, the Imperial visit that Yanaka had dreamed about, remained just that- only a dream.

Construction of the grand house went on, despite the catastophic events, and was finally completed  after 15 years of work, in 1953.

And though Yanaka himself passed on in 1965, and the house was subesequently left empty for years, it is possible now to visit this home, of interesting design, on the first and third Saturdays of each month.

I joined one of the guided tours ( 500 Yen) last weekend, and as someone with a deep interest in Japanese aethetics and history, I found it more than a little interesting. Definitely more interesting , however, than beautiful or impressive.

A firm believer in adapting a home to the environment in which it is built, Yanaka made sure that there were numerous features which would help keep the place cool and dry during Japan`s sultry summer months. Also of interest, are the numerous paintings which have remained surprisingly vivid in color even after all the years.

The reason for this is that the house had been unused and boarded up, and for years these paintings remained untouched by sunlight. 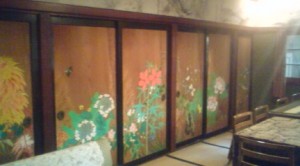 The paintings are still vivid

As I have already mentioned, the house cannot be said to be magnificent, or even beautiful, but still, as a repository of upper-class life in an age gone by ( most of Yanaka`s original STUFF still remains in the house), walking through its corridors and rooms is like stepping into a different era- namely the early Showa Period. 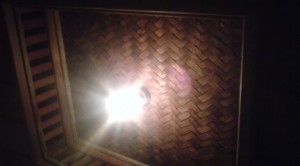 One of the first rooms you will see if you visit, is the maid`s room. And though now Japan seems to me to be one of the most CLASSLESS societies, this room in ALL of its elements, stressed the lower rank of the one who slept there. Even the tatami mats are small than usual size- amd had no borders around their edges! 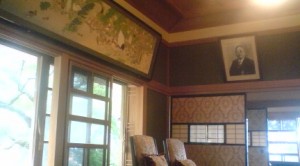 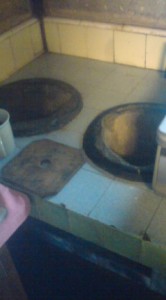 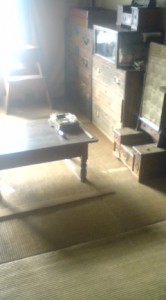 The maids quarters with their smaller, borderless tatami mats- stressing the lower rank of the one who slept there 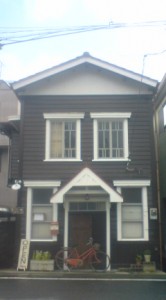 Another pleasure of walking through this old house is the presence of all the beautiful old wood which was used to build it.

If you love nice wood as much as I do, either before or after a visit to the old Yanaka Residence ( now called Yanaka no Mori), you should probably have some coffee, cake, or curry rice at Posten, an old post office ( which was active until 1965) which has been converted into a charming ( and delicious) cafe. It is located just opposite the old Yanaka house.

By the way, you might wonder why the old Yanaka residence is now called Yanaka no Mori- which for those who understand Japanese implies something to the effect of the Yanaka Woods. The reason this might be puzzling is that though there are a few large trees on the property the house could not be said to be in the woods.

The answer to this question is simple ( and quite silly, in fact). You see, the current owner of the house- is a Mr. Mori ( 森さん, literally Mr. Woods), who as a play on words, and using a different Chinese character with the same  pronunciation (杜), dubbed the local architectural curiosity Yanaka no Mori (矢中の杜).

For more on Yanaka no Mori: 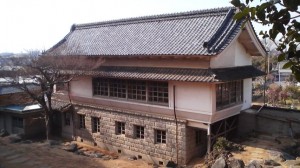 A view of the Yanaka no Mori`s Japanese style annex