To TPP or Not to TPP ? – That is the Question. Hundreds in Tsukuba march against the trade pact 21 February, 2016 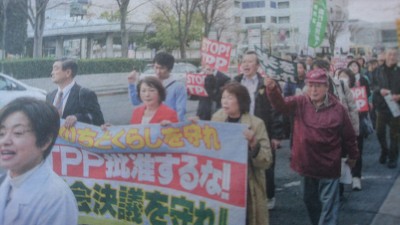 About 350 people marched through the center of Tsukuba City demanding that Japan withdraw from the TPP (Trans-Pacific Partnership) Trade Agreement. Double that number had attended an Anti-TPP Symposium earlier in the day at the Tsukuba International Congress Hall (Feb. 14th 2016)

After more than five years of negotiating ( much of it secret), 12 countries signed a treaty on February 4, 2016 potentially creating a huge economic block – and thus countering the newly emerged financial clout of the People`s Republic of China and India. The treaty will supposedly create lots of profits ( though no doubt this will mostly be a matter of making the rich richer), will lead to stronger protection of patents (keeping pharmaceutical prices high by making generic drugs less available) and patents ( meaning lots of lawyers scouring the Pacific Rim seeking cases of infringement). Also, its Investor-State Dispute Settlement (ISDS) system will help protect investors (and make it possible for corporations to sue governments that pass laws that cut hurt profits – like those pesky environmental or labor laws!).

On a completely positive note, though, the agreement will possibly lead to major controls on trafficking in terrestrial and marine wildlife.

Is there any advantage in this treaty for Japan? Well, I`m not sure. Supposedly, the all powerfull automobile industry will benefit. There will also be cheaper and more various imported good available (FUN!).

But some people are not taking the signing of the treaty sitting down. I was surprised (and impressed) to see hundreds of people marching through central Tsukuba demanding that Japan withdraw from the TPP (yes, there still is time – as New Zealand Prime Minister John Key has said – until the treaty is ratified by the signatory nations, it is just a piece of paper!)

I found out that the marchers had earlier attended an anti-TPP symposium at the Tsukuba International Congress Hall. The meeting focused mainly on the effect the treaty will have on Japanese health-care (make it more American – bad for the majority of Japanese!) and agriculture (many small farmers – and ALL rice farmers- will be driven out of business by cheap imports). The claim was made that this will bring about drastic and damaging changes in health, diet, and culture.

I think I have to agree. Also potentially important is something I heard from my friend Mamoru Shimizu – food security. If there is a major disaster or war in the region, what will Japan do to feed itself. Japanese farmers CANNOT compete with those in most other countries in terms of price (while at the same time no one can compete with Japanese farmers when it come to quality). If most of the small farmers go under, and their farmland is converted to solar-panel fields or convenience stores, where will the food come from in time of emergency?  Even at present Japan`s food self-sufficiency is far too low – what will it be a few years into TPP?

So as you can tell, I`m not very hot on TPP? Can anyone out there convince me to chance my mind? Send your comments.