The Old Miyamoto Residence ( Once a Soy Sauce Brewery and Shop) in Hojo, Tsukuba (北条の宮本家の店蔵) 23 February, 2016 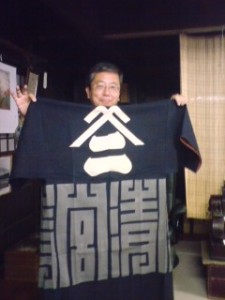 It was a chance encounter that first brought me to the old Miyamoto House, a rustic old home which in the late 19th century functioned as a soy sauce factory and shop as well as a place of residence. This happened a few years ago, at a time when I could never have imagined that I would one day live within a five-minute walking distance from it-  which I now do!

At the time, my parents and sister were in Japan, visitng from abroad, and I had taken them out to see the old villages at the foot of Mt Tsukuba. On a beautiful afternoon we were relaxing on the broad lawn-covered grounds of the old Hirasawa Government Office ( Hirasawa no Kanga), and admiring the impressive reconstructions which now stand upon the site. I think we were the only ones around. 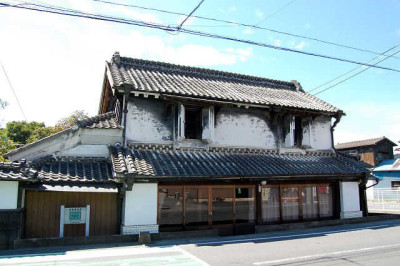 Suddenly a car which was passing by on the adjacent road slowed to a stop. The driver, a cheery gentleman in youthful middle-age, got out of the car and walked briskly towards us. He then proceeded to ask us, with abundant enthusiasm, to follow him to his house, which he said he wanted to show us.

My parents, native New Yorkers, are not in the habit of going with strangers who approach them on the street and invite them home. I convinced them, however, that things were different here in Tsukuba and that it would be alright to go with him- and thats what we did.

It  turned out that this friendly gent was none other than Mr. Miyamoto, the man who had married into and was adopted by the Miyamoto Family which has long lived along the town of Hojo`s main commercial street. Their old house is one of the more interesting ( and rustic) examples of traditional architecture in an area very rich in such structures.

The tour Mr. Miyamoto gave us of the house ended up being one of the all-time highlights of my parents many visits to Japan. 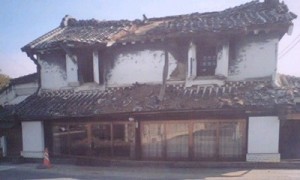 The old Miyamoto Family store-front just after the earthquake of March 11th. 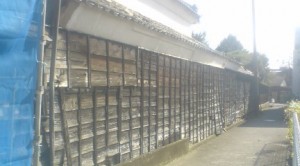 This wooden-planked side wall of the Miyamoto House runs all the way from the main commercial street ( sho-tengai) to the back moat (URABORI). I took this picture just after the earthquake so you can see the blue sheets they kept the rain out of all the cracks till they were repaired

Though badly damaged in the earthquake of March 11th, as evidenced by the pictures above, the Miyamoto house, or should I say the Miyamoto Family COMPOUND is still impressive. From the outside, one is struck by the beautiful old wooden walls which run from the main street all the way back to the URABORI irrigation canal, built at least as far back as 1847.

Entering through the main gate you can find the buildings, the old shop / residence and two old store-houses (kura) line the perimeters of the property while the central space is a garden in which you can appreciate the plants, flowers, grasses and fruits of the season. Directly ahead of you as you pass through the gate you will see an impressve, old zelkova tree with a large white Akita-Ken dog chained ( too shortly) nearby. This dog is very friendly and in need of affection, but be careful he doesn`t chew on you ( the holes in the shirt I wore on a recent visit there are a testament to the sharpness of his ivories). 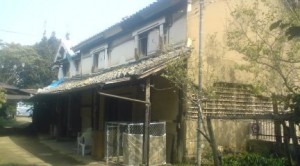 To the right of the main gate is the entrance to the Miyamoto`s living quarters, with dirts floors, wooden beams and dim lights, which is connected to the old shop. The old soy sauce store could be entered from the main street, and Miyamoto-San will show you the amazing old shutters and how they worked. You can also see an old American made cash register (made in 1920) and much more impressively, an old Japanese cash box from 1699. The wooden beams used to make this part of the building are awesome in their length and thickness. 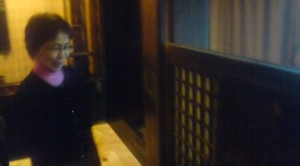 This room is so secure, in fact, that once the Joyo Bank used it as its Hojo branch, while its usual building was being renovated.

Also in the store front, you can see the Miyamoto`s collection of Meiji Period woodblock prints which also extremely interesting ( for me, at least). 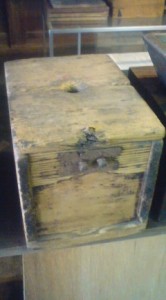 The pride of the Miyamoto House is now one of the store-houses which has been converted by students of Tsukuba University into a small concert space. Mr. Miyamoto is especially proud of the fact that members of the Vienna and Berlin Philharmonics have played chamber music there. 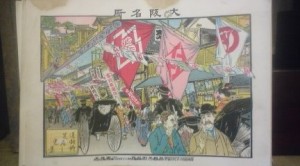 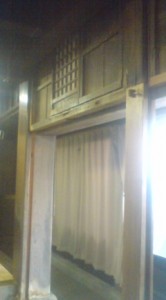 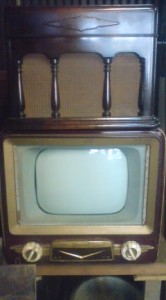 Some more recent antiques- an old tv and phonograph

The Miyamoto House is located on the main street of Hojo Town in Tsukuba City. It is just across the street from the new Joyo Bank building ( the Hojo Branch) as well as an interesting old mansion, now called Yanaka no Mori, which I have written about here : 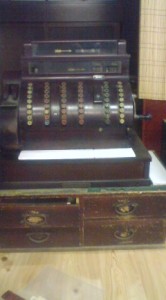 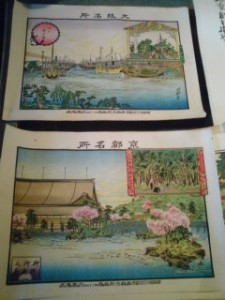 Some more of the prints in the Miyamoto collection 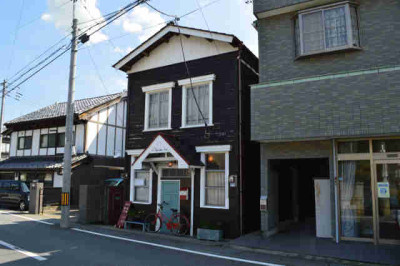 Just to the east, a couple of houses down on the same side of the street is the old Hitachi Kita Hojo Post-office building – which has been converted into a cafe-restaurant called Posten. The building is from 1933. It has beautiful wooden interiors and good coffee. 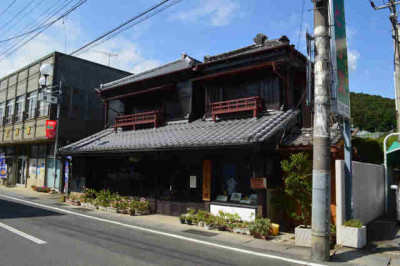 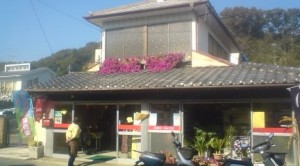