Pride of Burma (Amhesrtia nobilis) – the “Most Beautiful Blossom in the World” Now in Bloom (for only the second time ever, in Japan) at the Tsukuba Botanical Garden (for only 22 January, 2016 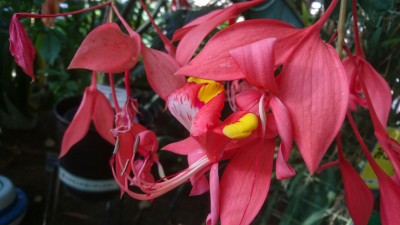 I try to make it to Tsukuba`s Botanical Garden at least twice a month. In that way I can monitor the little week by week changes, the succession of blooming and blossomings of the various seasons – and make the best use of my Annual Pass ( purchased for 1,000 yen) which gives me unlimited free entry for an entire one-year period.

In winter, I enjoy spending time in the tropical green-houses, keeping warm and basking in the fragrances of rain-forest. This past Wednesday, though, besides escaping the cold, I wanted to check on whether the flowers fukuju-so (adonis) or setsubun-so were already in bloom.

When I got to the parking lot I was surprised to see that it was full (luckily, I was on foot!) and when I stepped into the visitors center to present my free-pass to the woman at the ticket window, I found that it was packed with visitors -most of them senior citizens.

When I asked at the ticket-window what was going on, I was told that yo-rakuboku ( ヨウラクボク), a blossoming-tree from southern Myanmar was in bloom – and that this had been touted by the press and television as the “Most beautiful blossom in the world”. 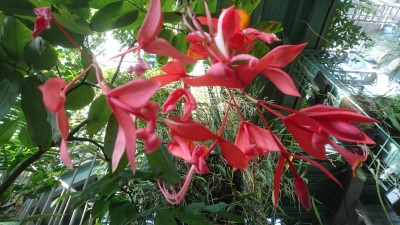 Pride of Burma – by crouch down and pointing my camera up, I could get this impressive view, but……

And since traditional Japanese culture has long promoted the aprreciation of flowers – and because many native-Ibarakians happen to be farmers and/or avid horticulturalists, this announcement by the media brought a wave of rock concert-like crowds of senior-citizens descending upon the botanical garden`s tropical green-house.

Instead of checking up on the fukuju-so, I followed masses, swept along by the excitement and headed for a look at what I would soon find out was known variously as the “Pride of Burma” and the “Queen of Flowering Trees” 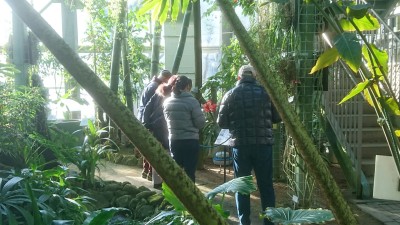 … from a distance, or regular standing position, the specimen was not very striking. Instead of excited “oohs” and “aahhs” there were sarcastic chuckles and remarks such as: “This is it?”

I walked along in the line as if it were a procession of pilgrims, with excitement warming the frosty winter air. When we arrived at the appropriate green-house (the farthest one from the entrance) we hit an obstacle – the ground-floor entrance was locked to keep the cold out. To get in we had to climb a long and steep  double-flight of stairs. While no problem for me, this was an unpleasant surprise for many of the visitors, who were in their late 70`s, 80`s or more! Still they did their best to negotiate the staircase up, go around the greenhouse using the upper walkway, and then with even more difficulty, make their way down another set of steps to the blossoming tree.

Such was the determination! 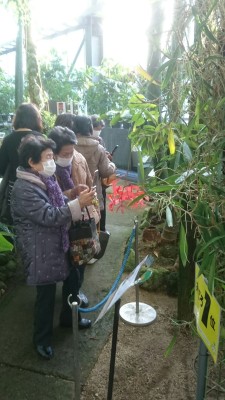 Most of the visitors with me there on that day were senior-citizens- some of them quite elderly. To get to what was touted as “the most beautiful blossom in the world” they had to negotiate two steep stairways.

But approaching the “Pride of Burma” and standing at the back of the crowd that had gathered around it, taking pictures, there were known of the usual murmurs of excitement. Instead I could hear giggles and snickers: “This is it?” “It`s this?”

When I was finally able to make it to the front, I too, felt let down- though I tried to take in the moment stressing to myself that this was only the second time in history that this tree has bloomed in Japan.

I spent a lot of time in that green-house, though, not wanted to step back out into the cold. I found lots of other things to appreciate. I stood in a corner and took in all the rain-forest smells – and I did a search on my smart-phone for Amherstia nobilis. I found plenty of photos on line. Looking at them I realized, despite what I could see through the disappointed crowds gathered around it across the greenhouse jungle – that it really was a spectacular blossom !