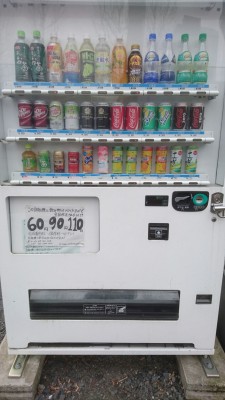 The hand-written sign posted inside this roadside vending machine caught my eye.

O the advantages of walking! What discoveries can be made! Not even Tsukuba`s punishing winter winds (the infamous Tsukuba Oroshi) can keep me from making my way on foot – and the policy paid off once again ! I almost did miss this “find”. though, with my hands deep and my pockets, shoulders locked up in a tight shrug, and face turned down to avoid the frosty gusts.

But I did catch sight of it – out of the corner of my eye!  A hand-written sign scotch-taped up inside a roadside vending machine. I stopped to read it :

This vending machine, and the drinks on sale in it, were featured by NHK in a nationally televised report !!.

No artificial coloring or preservatives

If you have any questions call this number…….. 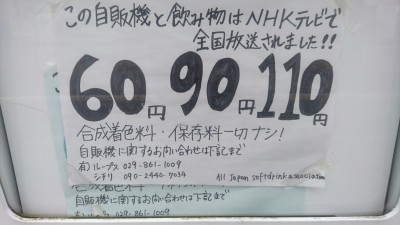 They offer the same drinks found in other machines in Tsukuba for (in the cases of some of the items) half the price!

That meant that some of the drinks on sale in that machine were going for half the normal price! Both surprising AND significant. Let me tell you why.

Those of us who have lived here in Japan for the last 20 years have experienced something very rare, in comparison to those who have lived in other countries for the same period of time – or even in Japan (for the same period of time) in other decades. What I`m talking about is that while prices have risen significantly around the world from the 1990s till now, in Japan we have actually seen many essentila items become cheaper – much cheaper than they were when we first arrived in this country long ago.

There is one glaring exception, though – vending machine beverages ! They were all most all sold for 100 yen when I first arrived, then went up to 110 yen ( a huge increase I thought) and have now gone higher still, with some palstic bottles of tea  or other beverages going for 160 yen! 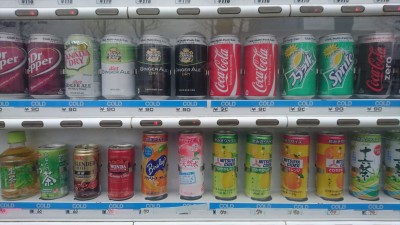 The “cheap vending machine” with prices ranging from 60 to 90 yen a can…….

Though I do relealize that the machines use up electricity and that many machines provide hot drinks, these price rises have always seemed jarring (especially when my three boys pester me for drinks at each drink machine we pass!) 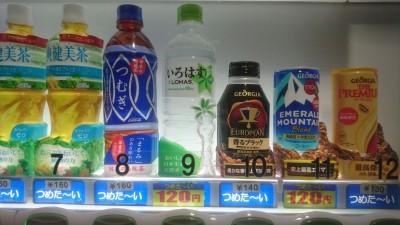 … and a “normally priced” machine with the same items selling for double the price.

Oh…. I almost forgot  to tell you where the machine is! It`s on Nishi O-dori, on the west side of the road, just north of Kita Odori about half-way toward the gas station that`s across from the old central fire-station! Let me leave the directions at that to make it a challege finding – a treasure hunt of sorts.

And while your searching for JApan`s cheapest vending machine, you might very well make some other surprising discovery. If you do, let me know! 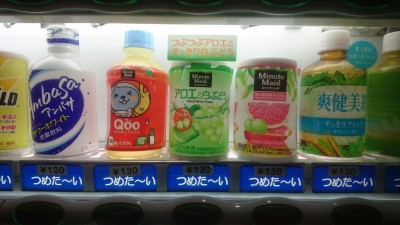