Warm Winter Weather Brings out the Spring and Summer(!) Flowers- why doesn`t that make me happy? 12 December, 2015 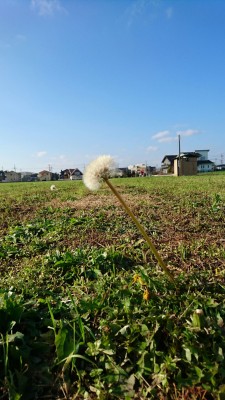 No, it`s not April – its December! Dandelion seed-fluff in a field on December 11th 2015. On that day temperatures reached a record 24.4 degrees C (about 76 F). Until recently, this spot in Tsukuba`s Karima neighborhood was a dense bamboo grove

During the month of November, I did my best to keep up with the goings on at the COP 21 meetings on climate change being held in Paris. Well, the huge meetings finished yesterday and I`m still confused about what actually happened. But, as if to drive home the urgent need of reaching the conferences goal – reducing carbon emissions and keeping global warming in check, Japan was hit by some VERY unseasonable weather – resulting in some bizarre botanical occurrences throughout the country, and some right here in Tsukuba. 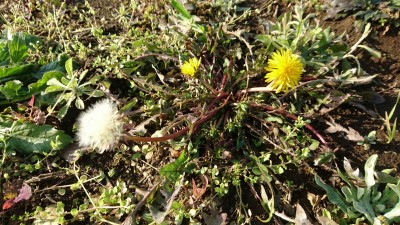 On December 11th, the TV was rife with reports of strange bloomings, NANOHANA (rapeseed blossoms) which usually come out in April or May, appearing in Yamanashi, and Sunflowers, usually representive of high-summer, in Shizuoka.

I haven`t noticed any sunflowers in bloom yet in Tsukuba, but on my way to a meeting yesterday, a person in the car with me suddenly pointed out the window exclaimed: “TAMPOPO NO WATA!” (Dandelion fluff !) Later in the day I came back to the spot to take some pictures. I didn`t need a jacket. Very comfortable. When I got back home I didn`t need to turn on the heat (save on fuel!)

But I realize that I shouldn`t be happy about these small comforts today – which probably bode great hardship- and even disaster, for future generations. I noticed just now as I write this that some sort of climate agreement has been finalized. Now I`ll have to try to figure out what it is exactly that was agreed to.

But before that, you`ll have to excuse me, I`m going to keep this post shorter than usual – I want to go out and enjoy the remainder of this beautifully warm, carbon-induced day! 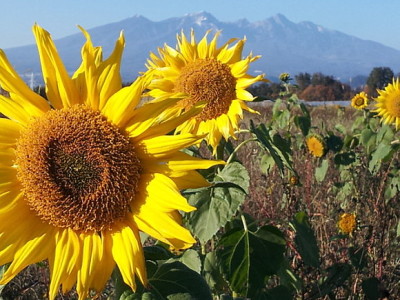 Sunflowers in Yamanashi Prefecture, in bloom in December – and not their usual August.