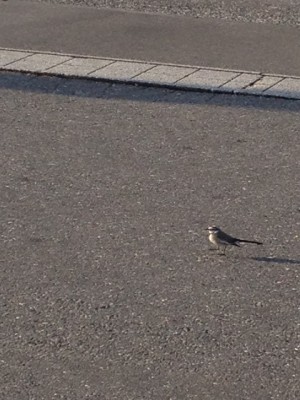 By rivers, ponds, rice fields or the sea-  that is where any of the numerous available field-guides to Japanese avian fauna will tell you to look for one of the archipelago`s most adorable (and frenetic) birds- the HAKUSEKIREI (ハクセキレイ).

But as the world around them has changed the lifestyle of these birds has changed as well- especially in recent decades.  Now in order to see them do what they usually do- scooting about in spurts and starts and flitting their tails nervously up and down-  you do not have to trek down to the river, or hike around any old pond. As it has turned out, the best place to see them these days is in PARKING LOTS- especially those in front of convenience stores!  Just  by sitting in your car at the local 7-11 you will very likely  see one, especially in winter.

I guess that these traditionally insect-eating birds have found that waiting around for dropped bits of ONIGIRI (rice balls) or potato chips around the convenience stores is a more efficient way of spending time than foraging round some silly old river or lake.

To tell the truth, I have never actually seen a HAKUSEKIREI (scientific name: Motacilla alba lugens ) find any food around these parking lots- and I always start to feel a little concerned for them. But they MUST be eating SOMETHING or they wouldn`t continue hanging around such places so long (and frequently)- right? 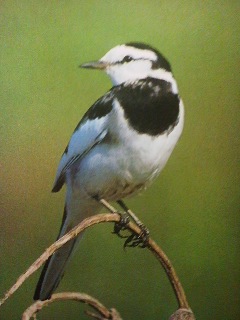 Based on what I have read in  Japanese birding field-guides, it is  apparent that the distribution of these birds has also changed over recent decades. Where they once headed up north to Hokkaido, Sakhalin and Kamachatka to breed in summer, they now simply breed right here in Eastern Japan- and that means that they are here all year round.

And though in the breeding season they nest off by themselves – also frequently using man-made objects, walls, fences, crevices in buildings as places to lay their eggs, in the winter, the HAKUSEKIREI nest in large communities often near well lit and busy centers of human habitation. Near Tsukuba there is a large colony of HAKUSEKIREI at the Ami Outlet Mall in Ami Town (do not confuse these with the large flocks of starlings that congregate each night at Tsukuba Center or in front of Tsuchiura Station.

Here is a video of a HAKUSEKIREI building its nest: 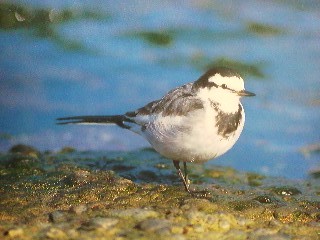 A HAKUSEKIREI in its more traditional surroundings

So keep your eye out for them when you stop by at convenience store. You can actually see that they have adapted to life by the waterside by the way they move. They dart about just as if they were following and then avoiding waves which lap and recede from the shore.

And why do they keep wagging their tails. Well there are several theories the most recent of ehich is that they do so to show predators that they are on the alert. 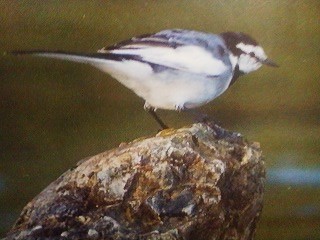 So now we can say that the convenience stores are getting even more convenient- we can now use them as a place for our shopping, banking, ticket buying, package sending, bill-paying, copying, toiletting and our BIRDWATCHING!