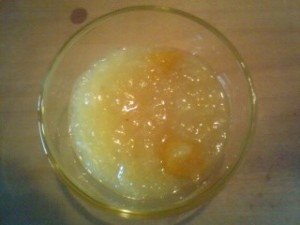 Yuzu Jam made according to my neighbor`s old family recipe

In the old town of Hojo, where I live, you have to always remember to stay properly dressed, even when you are inside your own home. That`s because the neighbors do not knock before entering- they just open your front-door and come in ! ( when I first moved in, I was frequently caught with my pants off before I learned this lesson!). When they do come in, however, ( and this is surprisingly often), they almost always bear with them some sort of gift- freshly picked home-grown fruits or vegetables, or some other home-made treats.

The other day, my next-door neighbor opened our door in the early morning ( and actually caught me offguard in my underpants once again!) and handed me a little dish wrapped in cellophane- freshly made Yuzu Jam. She said it was her family recipe, handed down from generation to generation. It was made using fruit which grows in her garden ( just about every garden on my block has such trees).

This was in fact perfect timing as I was just about to fix breakfast. When I was ready to eat, I spread a little jam on a slice of toast and took a bite expecting something harshly sour. Chewing cautiously, I quickly realized that this jam was mild and deeply flavorful. I spooned out some more on the toast and ate with gusto. I ended up nearly finishing the whole bowl in one sitting.

After breakfast I walked over next-door to say thank you and to ask for the recipe.

I`d like to share it with you. It is remarkably simple, but does require a little patience.

Peel your yuzu and break them up into segments.

Remove all the white strands from around the segments.

Squeeze out most of the pulp from each segment

Wash the remaining PACKETS ( I mean the segments with the pulp squeezed out) in water in a bowl.

Rinse away most of the water.

Heat the packets ( with no extra water but wet from the rinsing) in a sauce pan over low heat. 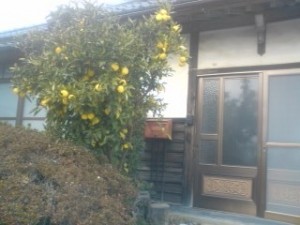 Though I have read that they originally come from the upper-reaches of the Yangtze River in China, Yuzu trees can now be found all over Japan ( south of Aomori Prefecture). As I have already said, they grow  in Tsukuba and its vicinity in abundance. Varying in color ( from lemon-like yellow to mikan-like orange) and in size ( from tangerine-size to that of a grapefruit), I sometimes have trouble differentiating them from Tsukuba`s other  winter citrus fruit.

Since each yuzu tree bears many fruit, there are always more than one can actually use ( even though the Japanese have so many ways of using them). That is why it is perfectly normal to receive gifts of yuzu from people with these trees. I have been getting them for the past two weeks ( by the bagfull) and have been using them in various ways- for example today, on the winter solistice, I put some in my bath- it was a tingly experience!

Here is something else to do with the yuzu that you have probably recieved- make a traditional skin lotion: