The Tsukuba Robots (of Japan`s National Basketball League) Have Their First Home Games of the Season – tonight (Nov. 20th) and tomorrow (the 21st) at Capio Hall 20 November, 2015 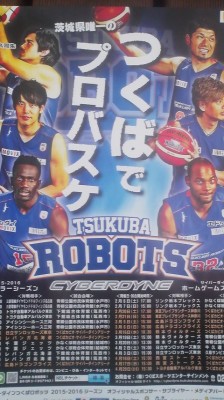 The Tsukuba Robots feature 213cm tall(6.11) Senegalese player Ajiz Endai and Six-foot nine inch (205 cm) American, Edward Morris. Go cheer them on tonight when they take on the on Hitachi Sun-Rockers at Capio Hall at 7pm (or tomorrow afternoon at 3pm versus the Hokkaido Rebanga!)

The highest-profile commercial venture to have arisen in the Tsukuba Science City is undoubtedly Cyberdyne, a company has made amazing strides in the development of robot technology ( interestingly, second place probably goes to a company with no connection to scince or technology – the apparel retail-chain Right-On). And just like so many company that have a name for themselves, Cyberdyne has decided to put it name om a professional sports team- and thus you have: the Tsukuba Robots (Cyberdyne).

I`m not sure if the name is an especially good one – since our traditonal image of robots is herky-jerky and unthinking (I would have gone with Super-Robots or Cyborgs), but anyway, instead of the word “robots” representing an image of the players, perhaps the company( which designs robots) wants the public to look at their robots as being as agile, skillfull and HUMAN as their players – and Cyberdyne seems to be making great strides in that direction.

Its funny – some people who saw the poster advertizing a basketball game with “The Robots” actually thought that it was an exhibition – Cyberdine`s robots playing basketball. One friend looking at the poster said: “Wow ! What will robots be doing next?!” before I pointed out to her that there was going to be an actual game with actual players.

The Robots hope to rebound from a poor start which has left them with a disappointing 2 wins and 10 losses (which is good for 11th place in the league). Their opponent tonight will be Hitachi (5th place) and then tomorrow Hokkaido (6th place)

Tickets for adults range between 3,200 and 10,800 yen. There are discounted pair tickets and season-tickets available, as well.