Man Arrested in Tsukuba after Digging Hole in Floor to Get at Woman in Apartment Below 1 November, 2015 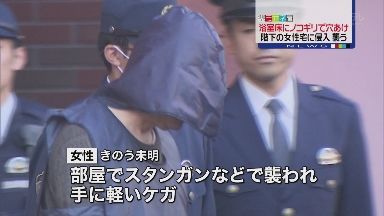 If you`ve been planning on buying (or renting) an apartment or condominium (called MANSIONS, in Japan) you might be having second thoughts these days – if you`ve been watching the news. First there was the case of the “leaning condos of Yokohama” reported last month, in which a major construction company falsified records to cover up shoddy work – similar abuses have come to light in the subsequent investigation.

And then there was a story which was first reported on TV at the end of October (the 28th, to be exact) – and it has been making apartment dwellers, especially those who are female and live alone, very uneasy.

Apparently, Mr. Masahito Sato (aged 51), a company employee in Tsukuba, had spent ten days digging a hole in his bathroom floor, using a saw and other tools. Then, when he had created a big enough opening for him to fit through, he slipped dpwn into the apartment of the woman who lives below him – and waited in ambush for her to come back.

When she did, it was after midnight, but he proceeded to assault her restraining her with threats of using a stun gun that he had brought with him

After his victim put up strong resistance – injuring her hand in the process, Mr. Sato fled the apartment and was arrested a few hours later at a Tsukuba conveninece store. It turns out that he has known the victim for ten years – he is a regular customer of hers at the restaurant she works at. He had recently rented the apartment above hers without her knowledge – with the aim of getting at her. It is not known how he found her address, though I guess with scruples like his he had probably followed her. 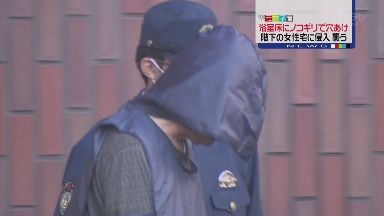 Masahito Sato in custody at the Tsukuba Central Police Station

While I would say that Japan is really quite a safe place, I would qualify that by saying that it is extremely safe for men. I have been in Tsukuba for a very long time, and practically every year since I have arrived I have heard one or two similar stories (sans the hole in the ceiling and the stun-gun). So don`t let the image of “safe Japan” lull you off your guard, ladies. Make sure to keep all windows and doors locked – and try to get an apartment which would be difficult to get into from the outside. You might also want to check up on who lives upstairs from you – and make sure he`s not the type who would suddenly drop in!

Let`s hope Mr. Sato is put safely behind bars for a long time.