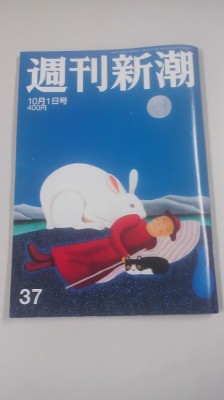 The October 1, 2015 issue of Shukan Shincho (Japan`s No. 2 weekly magazine) could not be found anywhere in Tsukuba last week- no matter how hard you looked for a copy. There is undoubtedly a connection between its absence from Tsukuba`s convenience-stores, coffee shops and internet cafe`s and the fact that that particular issue featured a story on Tsukuba`s mayor. One of the questions I asked myself was whether the magazine was sold out due to public interest – or “collected” by those loyal to, or working for Mayor Ichihara. 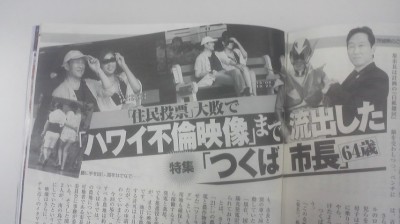 The headline to this two- page article that appeared in the Oct. 1, 2015 issue if Shukan Shincho translates as “After crushing defeat in referendum, things get even worse for Tsukuba`s mayor (age 64)- pictures taken in Hawaii of adulterous affair released for all to see !”

I am not  normally interested in scandals – and only on a rare occassion, while killing time at a convenience store, do I flip through any of Japan`s popular “scandal-sheets”. But last week was different. The buzz around Tsukuba was that Japan`s No. 2 selling weekly magazine had printed an article “exposing” Mayor Ichihara`s sexual infidelities and unethical business dealings. So while I was neither surprised ( nearly everyone in Tsukuba had known about these things about the mayor for years) nor scandalized (who cares?) by the story, I was still curious to see what was written – and what kind of pictures were printed (Japan`s weekly magazines can be ruthless!) so I dropped into my local convenience store. Not to buy, of course, but to do a lttle TACHIYOMI (立ち読み) – reading while standing at the store.

But the magazine was not where it should have been on the rack. Sold out, I assumed. Anyway, I forgot about it, and left the shop (but not before getting a couple of rice balls and a drink !) Later in the evening, I happened to be at one of Tsukuba`s (over)abundant shopping mall. While at the book-store I checked for the magazine – but it wasn`t there. But I forgot about it and ent home.

The next morning, I was having coffee and a huge slice of toast (part of what they call the “morning set”) at the Komeda Coffee Shop near Tsukuba Center. They carry a large selection of magazines there- including the one I had wanted to see: SHUKAN SHINCHO – but the October 1st issue wasn`t there!

That`s when I started to think – has the magazine sold out everywhere – or has it been “collected” by the mayor – for reasons that would be quite understandable.

Anyway, instilled suddenly with a true enthusiasm for finding a copy of the elusive issue – I set out about town – and couldn`t find a single copy.

And the sfunny thing is, that in Tsuchiura, Ushiku, and Ami – just outside the border of Tsukuba City to the south and the east, I found what I was looking for – stacks of it, at convenience stores, bookstores and supermarkets.

Naturally, finding the magazine, I felt the satisfaction of a mission accomplished. But after I`d read the article, and seen the pictures I was disappointed – it was all so boring (so much so that I won`t even repeat it ) and such nonsense!

But then a few minutes after having closed the magazine and put it back in its conveninece store rack (in Ami Town) a thought came to me – or perhaps I shouild say a question cane to me:

Why would a National Weekly print a story on Tsukuba`s mayor.? And more interestingly – why at this time?

As I have mentioned all of Tsukuba`s locals know about the mayor`s girlfriends (and his father`s, as well). I`ve heard it joked about for YEARS ! And more to it, the mayor will most likely not run for re-election next year (at least that`s what my inside sources tell me) so there can be no political effect from it`s publication.

But after thinking about it for a while, I think I came to understand the situation. though – and its a bit scary.

For the past few years, mayor Ichihara had been trying to push through the city assembly a grandiose, 300 million dollar plan for the construction of a sports park ( a large part of it to be on his own land it turned out!) And in a country where connections between politicians and construction companies – and yakuza are common, you could say “traditional” it would not be going too far to assume that the mayor had made certain promises to certain people about receiving a piece of the pie (the 300 million to be allotted for construction etc. It is also not hard to imagine the mayor taking certain gifts from certain people who wanted to be certain that they would be “in on the action”.

But in the end, something happened that the mayor could not forsee. While the local people (those whose families have lived in this area for generations) initially backed the project out of civic pride and a sense of progress through contruction projects, and would never actually mount a battle against him, the legion of “new residents” many of them highly educated and retired (meaning plenty of time on their hands) saw his project as a huge waste of money on something that was completely unneccessary (its ironic – because Ichihara`s previous development projects helped bring in all the people  who would eventually defeat him.

Still the mayor could never imagine that the project would be trashed. And what happened must have come as a major shock – the Japanese governmenr decided to scratch its own original palns for the new Olympic Stadium – citing exhorbitant costs. In other words, even the local people, Ichihara`s supporters came to see that now was not the time to be starting such an extravagant project – now meaning a time when the city doesn`t have the money (the Greek-crisis, features almost daily in the news, must have also driven that idea home.)

Anyway, Ichihara`s worst nightmare came true – 80% percent of those who voted in the August 3rd referendum on the project rejected  it. The mayor had no choice but to think the unthinkable – and cancel the project.

And while most Tsukubans ere very pleased with the result, I imagine that Mayor Ichihara was not simply humiliated – he was probably scared. He very well might have made promises that he did not keep. A budget of 300 million to be allotted to various construction companies- had turned to zero.

There very possibly were some very disappointed people out there – the type of people you don`t mess with.

I can think of no other reason for them to have published such nonsense at this point in the mayor`s career.