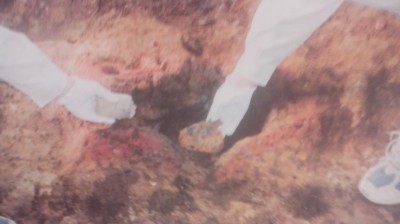 The remains of an 8th century Iron-forge and workshop discovered near Tsukuba`s Banpaku Kinen Koen Station. While now Japan is the number two producer of steel in the world (after China) it has to import all the iron ore needed for the process. Until late 19th century industrialization Japan made iron and steel from iron sand (SATETSU) which is found in abundance in Ibaraki (especially near the Kashima Grand Shrine,). Interestingly, the earliest great site for the mining of iron sand is in Shimane Prefectrue – near the famous Izumo Grand Shrine . The establishment of these religious centers near iron-sand sites shows how important metal making (and sword production) was for the early Yamato court.

At ten in the morning on October 17, 2015 several dozen people gathered inside the pre-fabricated building that functions as the headquarters for a team of archaeologists working at the Honden* archaeological site in Shimana, Tsukuba, not very far from the Banpaku Kinen Koen Station. People had come from around the greater Tsukuba area to get more details about a story that appeared on the front page of the local Joyo Shimbun Newspaper two days earlier- the remains of an 8th century Nara Period) iron-foundry and workshop had been unearthed – with evidence of iron and steel production on a large scale. Apparently weapons and agricultural tools were produced there. 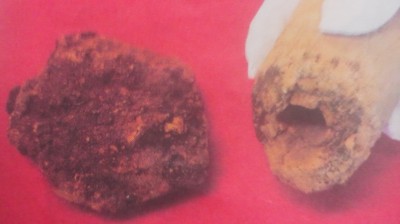 Iron-forge artifacts – a clump of iron on the left and a HAGUCHI, part of the mechanism which pumped air to stoke the flames

The news was exciting for everyone there (a bunch of history geeks!) – and especially for me (the biggest geek of them all!), because when the announcement had been made of the discovery I had been reading a little book by Hirotake Shibata called TO-GOKU NO KODAI (東国の古代 産鉄族オオ氏の軌跡 (Eastern Japan in Ancient Times – traces of the iron-producing Oh Clan) first published back in 1980. The book tries to show how important the Oh Clan was in occupying and colonizing Eastern Japan – having brought with them their mastery of metal-making and working from what in now Shimane Prefecture and the Island of Kyushu.

Metal and rice production were important features of the civilization they brought with them to Eastern Japan – by ship, venturing inland via river and Lake Kasumigaura  The process they used was brought over to Japan from the continent in the 4th century AD. And the metal making went hand in hand with rice production – since metal tools were needed to do the work, and swords to fight off any natives who resisted their lands being turned into paddy fields(Those of you who remember the great animated film MONONOKE HIME – Princess Mononoke – might recall that Eboshi, a symbol of the incursion of the Yamato People into the Emishi lands, builds a great TATARABA iron-works.)

Anyway, because I was reading that book – and talking about it almost every time I got the chance, that the news of the discovery  was a thrilling coincidence for me – and got me all stoked. Nothing like it had ever been found within the Tsukuba City limits before, and since during the Nara Period iron-production was strictly controlled by the central government (based in Nara) there must have been some personage of importance in the Shimana area to oversee the forge found there. 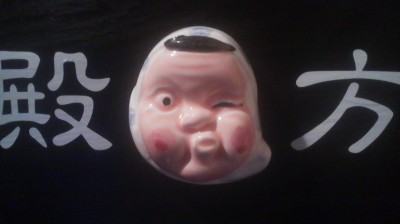 This is a HYOTTOKO mask, seen ar festivals all over Japan. One theory asserts that represent those early metal makers who came to eastern Japan and kept the fires going strong by blowing on them. 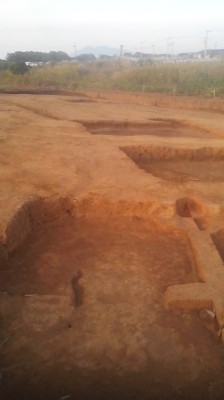 * This place name is written with the character 本田 and can be pronounced as either Honda or Honden. Since 本 means “main” and 田 means rice-field, we can infer that that means “the main rice-field”. However, in his book “Eastern Japan in Ancient Times – Traces of the Iron Producing Oh Clan” Hirotake Shibata suggests that certain place names which are now written using the character TA 田 actually refer to “iron-sand fields” , places where iron sand was dug up. This theory works out perfectly for the excavacation sight at Shimana Honden – the name would mean : the main iron-sand site.