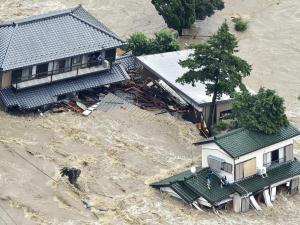 On September 10th, the Kinugawa River in Ishige (Joso City) – Tsukuba`s neighbor to the west- burst through its embankements or s at some spots simply overflowed. Hundreds needed to be rescued and thousands are now homeless- with nine still missing. (photo from the Yomiuri newspaper. About 700 refugees for the disaster are now sheltering at the Tsukuba Koryu Center (in Hojo, Tsukuba) and the Toyosato Koryu Center (in Toyosato, Tsukuba)

It had been raining steadily, and very hard, all night long. When I left the house this morning (September 10th) it was still coming down- in biblical proportions. But like most Tsukubans, I saw the overwhelming barrage of wetness as an inconvenience- though an amazing one – something that had to be dealt with in order to get to where I had to get to.

I didn`t realize that just a few kilometer to the west, lives – and houses were being turned upside-down. I got a hint of it at a ramen shop just before noon. All of a sudden several smart phones went off at one- and very loudly. I  was puzzled by the fact that everyone seemed to have the same ring tone. Then I realized that it was  a DISASTER WARNING being sent to subscribers- I thought: ” Oh no! Not another earthquake coming!” But then I heard the chatter of the people with the phones- the ones who had received the warnings- there was danger of flooding in Tsukuba. The Sakura River was at dangeously high levels. People living along it were being ordered to evacuate. That meant thousands of people from the neighborhoods of Kamizakai, Sakae, Oh, Matsue and Matsuzuke would have to head for places of refuge (or the homes of friends or relatives). 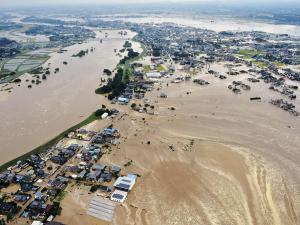 Flooding along the Kinu River on September 10, 2015

Still, none of the people in the ramen shop seemed very perturbed. It was only a warning- nothing had happened yet- and everyone was too busy wolfing down their noodles- everyone including me.

Well, its banks seem to have contained the Sakura (within the Tsukuba City limits)- but the news from over in the next town- Ishige (now part of Joso City) was shocking. The Kinu River had run over its banks and hundreds of homes, businesses, factories, farms, nursing homes, etc. have been flooded- or washed away. Helicopters scoured the area for anyone stranded. More than ten were rescued- but nine people are still listed as missing (as of 11 pm on September 10th)

Historically this area has not been subjected to many eathquakes- and it is one of the farthest places in the Japanese archipelago from an active volcano. Still, until the past 20 years, flooding was almost an annual disaster. This is evidenced by the existence of centuries old riverside Shinto shrines  whose deities were supposed to prevent the rivers from going berserk. These had no real positive effect, of course, and unfortunately, it was only with concrete enbankments, watergates, dams and concrete river banks that created safer – though much uglier- riverside environments.

Well, I can hear the crickets outside chirping- the rain has finally stopped. There is calm all around. Unfortunately, for those who live across the city border to the west, peace will not be restored for a long time- if ever. Let`s hope that those who are missing are found and that the people can get back to their homes a soon as possible- though by looking at the horrific footage being shown on tv and the internet- its going to be much longer than soon before things get back to normal.