Operatic Version of Junichi Saga Novel to be Performed at the Tsuchiura Shimin Kaikan on August 8th 7 August, 2015 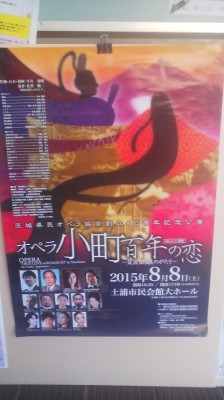 A poster for the event

When I think about important literature in Ibaraki Prefecture, three names come to mind. First, the Sakimori  (border guards) of old, who contributed their timeless and universal poems of a soldier’s longing and loneliness to the Manyoshu Anthology of Japanese Poetry. Then there is Nagatsuka Takashi (1879-1915), the author of a grimly realistic novel called TSUCHI which was originally serialized in the Asahi Shimbun Newspaper in 1915 before coming out as a novel- which at first embarrassed Ibarakians by its brutal portrayal of the harsh realities of life in this area one hundred years ago.

Finally, and in my opinion foremostly, there is Junichi Saga.

With a keen eye, a distinctive voice,  a sharp intelligence, and plenty of wit and humanity, Dr. Saga (who is also a practicing MD) has brought the Ibaraki of past ages back to life- time and again, in a whole slew of books that he has produced over the years.

While these works have yet to be made into a movie ( the one I translated into English- “Susumu’s Saga, would make a great flick!), he has been translated into many languages and has appreciative fans all over the world. Also, his “Gannen Mono” the story of the first Japanese to arrive in Hawaii back in the First Year of Meiji (1868) was turned into an NHK radio drama.

Then, several years ago, composer and conductor Hideaki Hirai created an opera, yes that’s right- AN OPERA for full cast (with dancers) and orchestra, based on one of Dr. Saga’s books-  Tsukubasan Ai Monogatari ( Mt. Tsukuba Love Story) which was entitled KOMACHI HYAKUNEN NO KOI (Komachi’s 100 year Love).

Composing an opera is no simple matter- and actually producing one is a MAJOR effort involving dozens specially trained people and daunting expenses. It is rare for a new opera to be written and actually staged- much rarer still for one to get multiple performances over a period of several years.

But KOMACHI HYAKUNEN NO KOI opera was clearly a success right from its first performance- and it will have what might (amazingly) be its eighth or ninth performance tomorrow August 8th, at the Shimin Kaikan in Tsuchiura.

The plot, which is set near Mt. Tsukuba (and in Hell, as well) 1,200 years ago is as any bonafide opera plot should be – complicated and crazy. Mr. Hirai’s music is wonderfully appropriate, as well. The costumes and choreography make the spectacle complete. If you close your eyes and try blocking out the Japanese lyrics o can imagine yourself at the opera house in Vienna in the early 20th century. I happen to be a big fan of opera myself and found this one reminding me of one of my favorites- Jaromir Weinberger’s  “Schwanda the Bagpiper” of 1926.

If I were in Japan tomorrow I would surely be at Tsuchiura’s SHIMIN KAI KAN for this special event- but fate has it that I would be on distant shores. So all I can do is hope that the response is positive enough to merit another production next year (or sooner still). And from what I remember of what I saw two years ago, I’m sure it will.