In Tsukuba, Fancier Than Usual Offerings to Roadside DOSOJIN ( 道祖神) Sacred Stones, Probably Mean Someone Is Having Bad Back Or Leg Pain 21 August, 2015 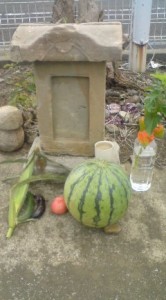 A selection of the best summer has to offer- at DOROKUJIN, in Onozaki Tsukuba

One of the outstanding TRADITIONAL features of Tsukuba`s older neighborhoods is the presence of a large number and wide variety of SEKIBUTSU ( 石仏, literally Stone Buddhas), sacred or devotional stones, which mainly (but among other things) represent particular Gods or Buddhas or commemorate certain rituals which have taken (or continue to take) place in the villages where they can be found. Some of these stones have actual figures carved onto them, and their posture and hand position etc. indicate what deity they represent. A large number of them, however, have no images carved on them at all, but are mere slabs or blocks of stone which can be identified only by the Japanese (and sometimes Sanskrit) characters engraved on them. In Tsukuba there are DOZENS of types of such SEKIBUTSU, each with its own function (in protecting the community) and depending on the hamlet, you will find devotion to different types of stones. 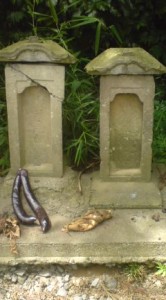 Some of these stones are now SO WEATHER-WORN that it is impossible to read what is engraved on them, and thus identify their type. In order to do that, you would then have to ask one of the senior citizens living nearby. There is, however, one type of non-figurative SEKIBUTSU, that in Tsukuba, can usually be identified NO MATTER HOW WORN AWAY it is. Im talking about the DOSOJIN ( 道祖神 ), protectors of travellers and the entrances to villages, which can be recognized by two tell-tale signs (if you cant read the inscriptions)- first by location- at a crossroads or at the entrance to a village- and then, MUCH MORE IMPORTANTLY, by the the offerings made to it! 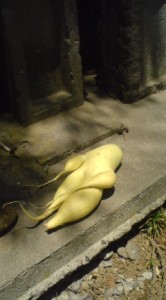 Tsukuba`s Dosojin are different from those found in other parts of Japan (the most famous of which, in AZUMINO, Nagano, feature COUPLES , carved onto them) not only in how they look but how they are treated! I have written before of how local farmers place all their DOUBLE-LEGGED DAIKON RADISHES ( abberations caused by stones in the soil etc) in front of these stones. The reason they do this is that these strangely shaped veggies look like HUMAN LEGS and cannot be eaten or sold! They are presented to the DOSOJIN, because this deity is believed to be the protector of travellers, who in the old days always went about- on their LEGS ! It is also believed that making such offerings will protect devotees from LEG AND BACK PAIN. 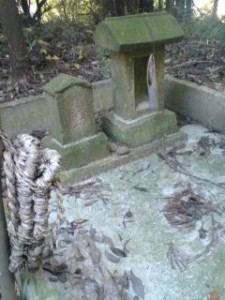 Other oddly shaped leg-like vegetables are also offered to the DOSOJIN, among them eggplant and yams. Shoes or straw sandals are also often left in front of or nearby these stones as offerings, often as a supplication for relief of back or leg pain.

Besides making them so easilly recognizeable, these customs make the DOSOJIN highly PHOTOGENIC and something to look forward to. Over the years I have taken mental note of where many of these SEKIBUTSU are located, and as I make my way around Tsukuba, in a car, by bicycle or on foot, I make it a point to give a glance, check up on them and see if there are any new offerings. 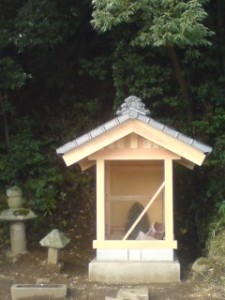 New shelter for an old DOSOJIN- under construction in Konda

Last week Mio was giving me a lift to Matsushiro ( a neighborhood in Tsukuba) and we took a short-cut through the old ONOZAKI neighborhood. I was conscious of the fact that we were about to pass a DOSOJIN, which I had photographed many times before. When we approached it we were in mid-conversation, but when I glanced down to my left as the car sped by , I saw something that surprised me so much that I shouted out- WAIT A MINUTE ! STOP ! Though she is used to odd requests- this sudden order seemed to have almost given her a heart attack. With an expression of annoyance and hand to pounding chest she pulled over into an empty lot, while I , without word jumped out to take some pictures of what were probably the BEST OFFERRNGS I had ever seen by a DOSOJIN- a selection of summer`s representative fruits and vegetables- watermelon, eggplant, cucumber, corn and tomato, plus the decorative plant HOZUKI- all typical symbols of the season!

Later I returned to the same spot to confirm the identity of the stone. I went up to a neighboring house and asked a Mr Sakurai- a cheerful and youthful looking man in his eighties, about it. He told me that the SEKIBUTSU was in fact a DOSOJIN, but that the locals called it by a variant name- DOROKUJIN ( 道六神). He remembers that even in HIS childhood the stone had already been rendered illegible by the elements. When I mentioned the unusual fruits and vegetables placed by the stone on that day, he said that one of the neighborhood grannies must have been having trouble with her legs or back if there were such fine offerings at the stone.

Mr Sakurai invited me into his home and offered me a can of cold tea and we chatted about the old days and about the changes that this area has undergone. Besides all the development which has altered the scenery around his beautiful traditional hamlet, Mr Sakurai complained about how the influx of outsiders (not foreigners, out of towners), has let to the degradation of human relations in Tsukuba. Even when foreigners pass me on the street they nod or wave hello- but these city folk (Tokyoites etc) who move out here dont just ignore you! what happening! Greetings are the foundation of all human relations!

Remember to keep your eyes open for the curious roadside offerings. And if your back pain just wont go away, you might want to try the time worn local remedy- placing some footwear, or even better-the best fruit of the season in front of the DOSOJIN.

For more DOSOJIN PICS see my posting at:

and for more of what Ive written on other types of SEKIBUTSU in Tsukuba: