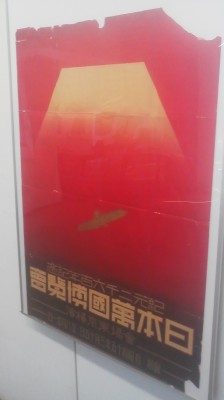 Poster by Yoshitaka Nakayama (1938) for the World`s Fair held in Japan Comemorating the 2,600th anniversary of the legendary foundation of Japan

According to the organizers of this very special exhibition of 24 war-time propaganda posters, approximately 1,500 different works of this sort were designed between the years 1933 (of the Manchurian Incidient) and the end of the war in 1945. The common link between them is that they were created with aim of increasing patriotic spirit and raising morale and selling war bonds. Each of them was  printed up in the thousands by the government and distributed to all the cities, town and villages in the country. 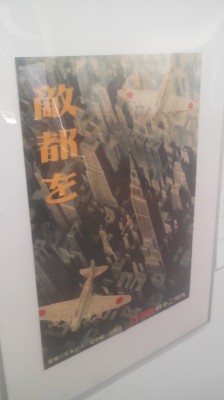 Well, on August 21, 1945- just six days after the war had officially ended, the Japanese government ( and not the American GHQ, as I incorrectly stated on a TV interview today) ordered that ALL war posters be destroyed. No one is exactly sure why this order was given, but the most plausable theory is that it was an attempt to erase any vestiges of  pro- war sentiment before the Americans arrived. 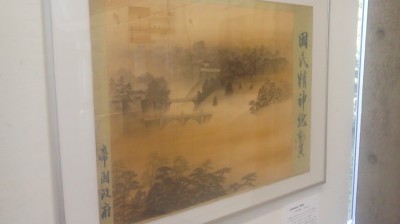 The Japanese then apparently went about the business of destroying these posters, with almost the same zeal that they had been fighting the war with- and all were destroyed – it seemed.

However, over the past 70 years, at least two stashes of these condemned posters have been found- one in Hokkaido (these can be seen at the current exhibition), and another in Nagano Prefecture. Though it involved serious danger, they were hidden away by people who realized what a waste (mottainai) it would be throw all those posters into the flames. 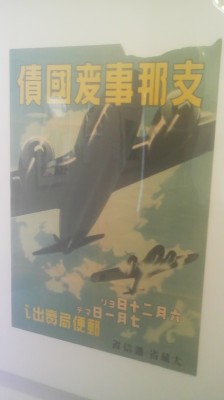 While just about every country has produced such posters, what distinguishes the ones on display this week in Tsukuba is that many of them were made by highly distinguished artists- especially Yokoyama Taikan, the Father of Nihonga (Japanese Modern Painting) and Leonard Fujita, who had made a name for himself in Paris.

One wonders why artists such as these would have “stooped” to creating workd like these, but I guess they just got caught up in all the excitement of Japan`s early victories (in Fujita`s case), or truly believed that it was Japan`s destiny to become the leader of a unified Asia ( as did Taikan) 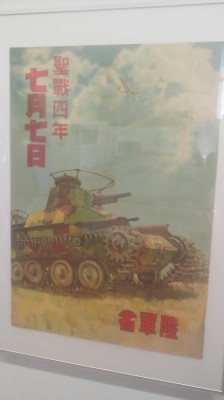 As propaganda, all the posters seem to me to work very well- determined men looking up into a bright future and planty of erect missiles, shells and guns to equate in the minds of the people military success with virility and sexual potency. 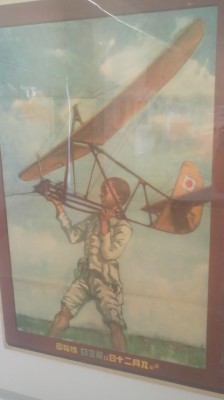 Another by Fujita, this one proclaiming that: September 20th every year is Aviation Day

It seemed to me that the better artists (Fujita and Taikan) created the subtler- and more effective posters. Fujita`s young boy dreaming of becoming a pilot one day, ready to launch his (erect) plane into the sky, and Taikan`s rendering of the Imperial Palace, symbolizing Japan as the sacred Land of the Gods. 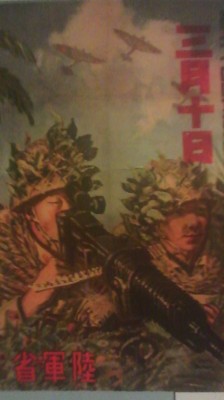 One serious problem with the exhibition is the plastic which protects the posters. They create a lot of glare and your own refelction stands out more prominently than the works, And though photography is permitted, these plastic coverings make it almost impossible to get a good shot.

Also interesting is the political nature of the exhibition. Is has been organized by one of Tsukuba`s prominent anti-war groups, and the leaflet it has produced emphasizes how wasteful war and terrible war is. Even if you whole-heartedly agree with that, I`m not sure if you will find the proof in these 24 very rare posters. 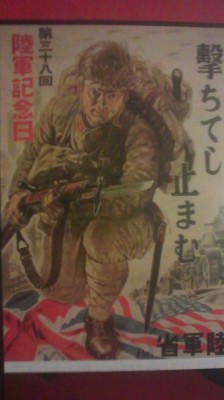 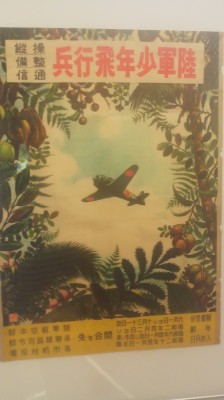 This exhibition is free. It will be open from 10 am to 5 pm until the last day- Sunday July 19th on which it will close at 4 pm.

The Tsukuba Shimin Gallery (つくば市民ギャラリ) is located in the Chuo Koen Park- just north of the Tsukuba TX Terminal from which it is a five-minute walk (it seems like much longer in this heat!)

It is across from the Expo Center (and the planetarium) right in the middle of the pond. 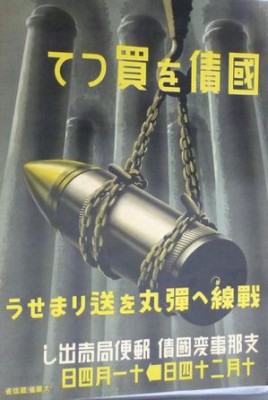 This poster shows a virile and “erect” shell and reads: BUY BONDS – HAVE AMMUNITION SENT TO THE FRONT 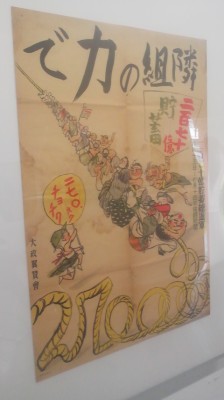 Poster by Hisara Tanaka (1943)- the Power of Everyone Working Together 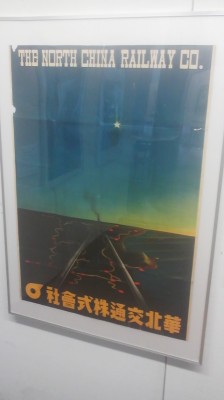