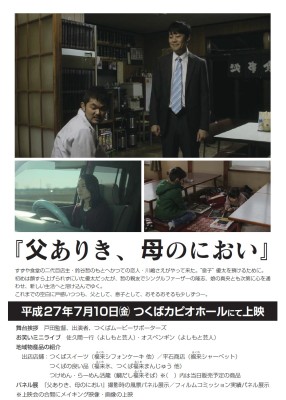 A poster advertising a showing of CHICHI ARIKI HAHA NO NIOI (Father`s Presence, Mother`s Scent) which was filmed entirely in Tsukuba

As a native New-Yorker I have long been accustomed to seeing my hometown on TV and in movies, no matter where in the world I have travelled to. Seeing the “Big Apple” time and time again, on screens both large and small, has made me so jaded that I have grown quite numb to  it – though from time to time I might point out to people watching tv with me: “I always used to go to that park (or walk down that street)” or “I`ve been to that shop ( or restaurant or station) a million times,” – a lame attempt at impressing.

Surprisingly, it took a short movie filmed in Tsukuba to get the first  “big rise” out of me in years, in terms of recognizing familiar places on screen. And I was not alone in the exitement. Hundreds of people packed into Tsukuba`s Capio Hall last Friday, almost all residents of my old neighborhood of Hojo, filled the theater with noisy murmurings with each change of scene: “There`s my house!” There`s me!” etc. That`s because the film, which recently received honors at a film festival in Okinawa International Film Festival, was shot entirely in Tsukuba, using various locations, and many “locals” also appeared as extras. 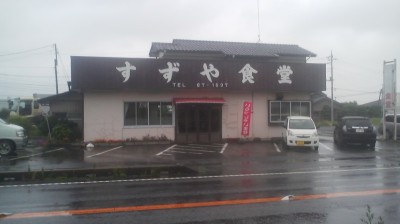 The Suzuya Shokudo restaurant in Hojo, Tsukuba, was used as a set for the film- I have been eating lunch at this humble establishment twice a month for more than ten years.

Each “location”: the Mt. Tsukuba Shrine, the streets of Hojo,Tsukuba Center, the Expo Center, JAXA, almost every cut, sent the thrill of recognition through the audience.

For me it was especially surprising. Much of the short film’s 30 minutes of drama takes revolve around a small, run-down restaurant (Suzuya Shokudo). Despite its appearance (most of you would hesitate to enter!), I have been eating at that very establishment at least twice a month for the past 6 years!  Watching the film I saw the actors sitting in “MY CHAIR” (where I always order the same thing- curry rice with a side dish of cold tofu), conversing at “MY TABLE” and taking chopsticks from “MY CHOPSTICKS BOX”!

This all came as a big surprise to me, since with great modesty, the propietors, an old lady and her son, never mentioned the film to any customers while I was there, nor did they have any posters put up at their estalishment advertizing it (I should have guessed that something was up, though, when last week they gave me a WHOLE PACK of tofu with my curry instead of the usual HALF!) 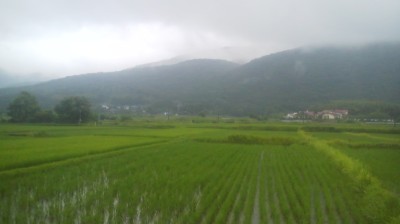 Besides the special connection the audience felt with the setting, the film itself was not bad at all- I might go as far as to that it was interesting. I can tell you with complete confidence, though that it was SHORT AND SWEET.

Let me tell you about it.

First the title: CHICHI ARIKI HAHA NO NIOI- which when directly translated means, “Father is present, the smell of Mother”. (obviously needs a different title for international release). It is a story of “the other Japan”- or should I say a story of the REAL Japan, and not the ideal one that most Japanese tend to accept as the image of themselves.

Two male friends find themselves in a similar situation- they are single men taking care of their only children. One friend`s wife has passed away, leaving him with a daughter. He works in Tokyo and comes home late every night. His daughter waits for him at the Suzuya Shokudo Restaurant.

Meanwhile, the other friend, the proprietor of the restaurant (played by a member of the Suzuya Family), suddenly finds himself taking care of his own son (by a former girlfriend) for the first time since the boy had been born ( 8 years earlier). As you can imagine, it is not easy going.

Father takes son to the Expo Center, Chuo Park and JAXA (the Space Center in Tsukuba) to help break the ice

The film also takes us up Mt. Tsukuba to a “match-making event” ( since ancient times the mountain, with its twin peaks- male and female- has been seen a place to bring the sexes together), and the charismatic tour guide provides some well needed comic relief and really in effect steals the show.

And what happens in the end to our two heroes? The movie leaves us wondering: do Father and son learn to love each other. Will the attractive young woman met at the “match-making party” become the girl`s step-mother (the two friends assume- she must have some “story” in her past- bor else why would she be at one of those match-making parties?) .

Oddly, this film about  people who families have lived at the foot of Mt. Tsukuba for generations all speak STANDARD JAPANESE !  While this means the language of the film loses a lot of flavor and authenticity, it also makes it accessible to a larger Japanese audience. Though I would have prefered dialect I can perfectly understand this decision when I think about the fate of the classic 1957 Tadashi Imai film: KOME (Rice), also filmed in Ibaraki (Dejima and Tsuchiura). Though it won a Palme D`or at the Cannes Film Festival (in the year it was released) it is now all but forgotten. This is probably to the fact the heavy dialect the actors used incomprehensible to todays viewers (I am in fact presently struggling to make an Engish translation with the help of native Ibarakians- its even hard for them to understand). 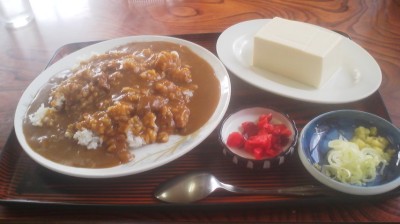 My usual lunch at the Suzuya Shokudo Restaurant

Another reason that “kome” has fallen into obscurity is that its one of its main themes- the plight of second born sons had now turned on its head. When Imai made the film in the the late 1950`s, first-sons inherited all their parents land, leaving  nothing to later sons who also had a hard time finding someone to marry because of this. Now its the opposite. Its harder for the first-son, with obligations to take care of elderly parents, to get married.

Getting back to CHICHI ARIKI. I have no idea what will become of this work by director Akihiro Toda, and I`m not sure you will ever have a chance to see it – but keep a look out for it at festivals and perhaps on a dvd collection of short films.

But since you are not regular customers at the Suzuya Shokudo, you might not find it as exciting as I did ! 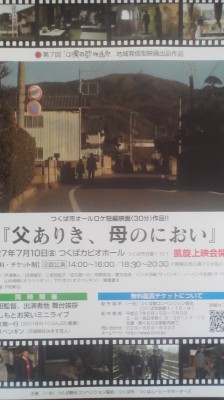 Though not on the same scale as New York, Ibaraki Prefecture has become a popular place to make movies. Long before CHICHI ARIKI I remember being almost as thrilled back in 2003 2ith the appearance of the now cult-classic “Shomotsuma Monogatari” (also known as “Kamikaze Girl”) which was filmed in the a town neighboring Tsukuba to the north-east. I never go by the AEON Shopping Mall there without remembering it (and the film is so much a part of Ibaraki identitiy that because of its title, Shimotsuma is the just about the only city in the southern part of the prefecture to keep its original name.

Its a real real tour-de-force, especially the first hour, and

you can see it on utube for free, here: