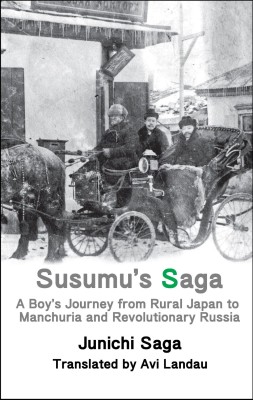 By Avi Landau
While in previous works  Dr. Junichi Saga has summoned up the voices of his elderly patients to bring back to life a now vanished, “pre-globalized” Japan, here the internationally acclaimed author turns his attention both closer to home, to his own father, Susumu, and further afield, to a family drama that spans 3000 miles, from a rustic hamlet on the shores of Lake Kasumigaura (Japan’s second largest) to Irkutsk, on the shores of Lake Baikal in Siberia. The appearance of a long-lost photograph, helps get father and son talking, and 77-year old Susumu’s memories flowing – scenes of early 20th century Japanese village life, the once thriving lake-port town of Tsuchiura, cosmopolitan Harbin in Manchuria, the border town of Manzhouli, Irkutsk in the dead of a Siberian winter during the Russian Civil War (1919-1922), and the long train rides between.
Susumu recalls what had happened 70 years earlier so vividly and in such detail that his son can hardly believe what he hears. However, visits to the National Archives and some rigorous (pre-Internet Age) research, turn up material that confirms much of what the old man says – and provides a much fuller picture of what was going on in the world that Susumu had lived in – but could hardly make sense of: at the age of eight…. a complex world filled with Radicals (Bolsheviks), anti-Radicals (“Whites”), Chinese warlords, Czechoslovak legionaries, freed Austrian and German POWs, Japanese soldiers and settlers, drifters, bandits and spies.
“Susumu’s Saga” is a story of memory, family, friendship, the clash of great historical forces – and survival, told in a unique way, with a distinctive “Japanese” sensibility. Many of its scenes, whether of the rapturous crowds cheering the arrival of Japanese troops in Harbin, or two kids tasting some jam on the sly in a neighbor’s basement, are likely to stick in your mind for as long as they did in Susumu’s – and just as clearly.

Go to this link for more information

or go to kindle Japan and search for: Susumu`s Saga

Tell Me About the War

in which Dr. Saga records the wartime recollections of more than a dozen of his elderly patients and neighbors.