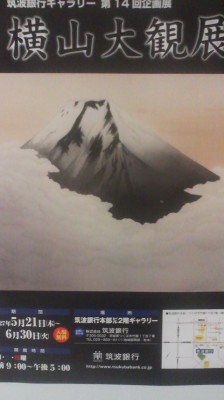 Poster for the Taikan Exhibition at Tsukuba Ginko`s Gallery, on the second floor of its main office in central Tsukuba. The 30 works on display are from a private collection (one of the bank`s customers, I was told) and you probably will not have the chance to see them again. Parking and admission are free. You will even receive a beautiful complimentary catalogue, if you go.

Cultured people around the globe are readily familiar with many of the big names in pre-modern Japanese art: Hokusai, Hiroshige, Sharaku, Ito Jakuchu, Ogata Korin and Kano Eitoku. Works by these and other Japanese artists of past ages are unversally accepted as being among the worlds greatest artistic achievements.

Few outside Japan, however, are familiar with the names of Japan`s early modern artists, or would recognize their works. This is a shame, since many of the works created during the Meiji, Taisho, and early-Showa Periods are not only beautiful, but represent a unique and fascinating-style.  I am talking specifically about a style called NIHON GA (Japanese Painting), which was developed as an attempt to rescue traditional Japanese painting from extinction during a period of rabid Westernization and modernization.

Interestingly, the history of NIHON-GA is deeply connected to Ibaraki Prefecture (in which Tsukuba is located)- and that is probably one reason why the Tsukuba Bank is having a showing of one of the “fathers” of Nihonga, and one of its most important practioners- Yokoyama Taikan. 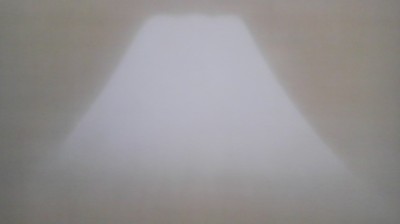 Taikan was born into a samurai family as Sakai Hidemaro, in what is now part of Mito City, in the first year of Meiji (1868)- just before the samurai class would lose all its special privileges. As a youth, he studied English at the Tokyo School of English and his father had hoped that would lead to a career in government service. His love of painting, however, won out over parental wishes, and he passed the exams to join the first class ever at the newly established Tokyo Bijutsu Gakko (now Geidai, the Tokyo University of Fine Arts and Music). He quickly fell under the spell of the charismatic art critique, philospher and writer Okakura Tenshin- the founder of the university.`

To make a long story short, under Tenshin`s guidance, Yokoyama Taikan (he changed his name since having disobeyed his father he would not succeed the family line- and was adopted into his mother`s family- the Yokoyamas!) and several other artists went up to northern Ibaraki Prefecture, to a village on the Pacific coast called Iizura, and they set about creating a new school of Japanese art- one that was new, yet still connected to the past. 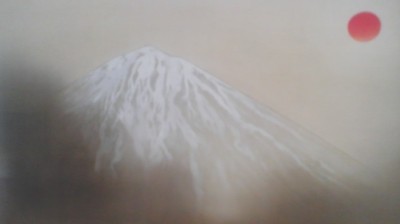 Japan – Land of the Gods (1940)- obviously a painting connected to the ardent nationalism of the time, this painting made me think of Kitabatake Chikafusa who while living in Oda (now part of Tsukuba City) in the 14th century, wrote a treatise called the JINNOSHOTOKI- the first book to suggest that Japan was the Land of the Gods! Yes, written right here in Tsukuba!

What was this new style they called Nihon Ga? Well, the first way it differed from Western painting was in materials used. Taikan and his circle used Japanese water-colors (made from sand) to paint on paper or silk. In term of philosophy, they wanted to get away from the line-based painting which was so fundamental to traditional Japanese painting. Instead, emphasis would be put on color. In Iizura, Taikan et al. developed a distinctive “misty” technique they called MOROTAI. 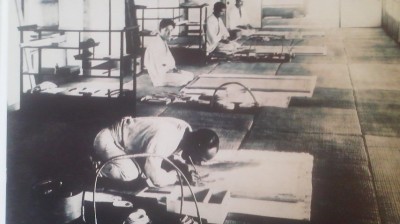 Taikan (in the foregriund) at work in Iizura in northern Ibaraki Prefecture. The artist was born in what is now Mito City and created some of his best work at Iizura.

Taikan lived until 1958 and his oeuvre is immense. But most of his paintings show strongly related themes- Mt. Fuji, pine trees (like those seen along the Ibaraki coast), Classical Japanses and Chinese heroes, traditional village scenes, cherry-blossoms and autumn foliage, mountains, the sun.

Many of his works are strikingly beautiful. He is one of the Nihon ga artists whose name you SHOULD know. 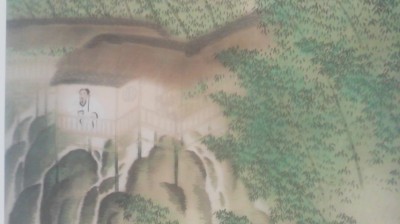 And while the 30 works on display at the Tsukuba Bank`s second floor gallery might not be his best, it is definitely worth a visit ( even if its just to get the complimentary catalogue). And since they are from a private collection, you might not ever have the chance to see them again!

When you enter the bank on the ground floor, go up the stairs (or take the elevator) to second floor. Strangely there are works both inside and outside the gallery room. My favorite paintings were hanging outside!

I would also strongly recommend leafing throught the books of Taikans complete works (in 3 volumes) on the table at the entranceway to the main gallery. It will give a clearer picture of the artist full body of work.

After you`ve finished your visit, you might realize, like me, that Yokoyama Taikan is a name that should be remembered! 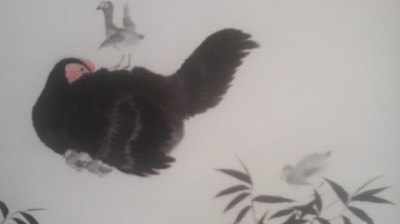 Chicks about to fly (1930) Many wonder why Japanese art features so many chickens- well it is not strange, especially considering that the emperors were considered descendants of the Sun-goddess. It is the call of the rooster which precedes the rise of the sun, so the ancients must have found a strong connection. A perfectly suitable theme for the Land of the Rising Sun – the creature most closely connected to sunrise!

The Taikan Exhibition will be held thru Tuesday June 30th.

The Gallery is open from 9 AM to 5 PM

Admission and parking are free. 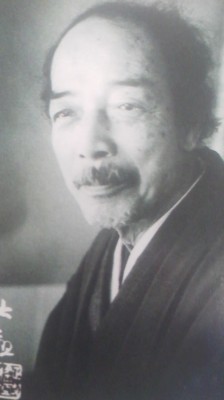