Renge So ( Chinese milk vetch), Probably the Most Beautiful of Japan`s Commonly Used FERTILIZERS! 2 May, 2015 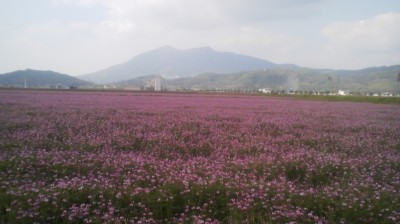 Renge-so ( milk vetch) growing in what will soon be rice fields, in Oda, Tsukuba

It is not surprising for me that PHOTOGRAPHY and the camera itself, though not born of this soil, have found Japan to be extremely fertile ground- a  veritable PROMISED LAND, after having arrived and taken up on its shores.

This is not only because of the fact that in Japan there has been always a  steady supply of highly skilled craftmen ( to make precision instruments) and/or because of its culture, which has been so conducive to forming successful KAISHA ( companies), such as the mighty Japanese camera makers ( Canon, Nikon, Pentax and Olympus) which have dominated the world market  over recent decades.

It is not only because in Japan there always seems to be a steady supply of people with highly developed artistic ( and or technical) sensibilities, which help make up the pool of world-class photographers in every genre ( my favorite being wildlife photographer Mitsuaki Iwago).

It is not only because the snapshot was able to replace the TEMPLE STAMP BOOKS used by Japanese pilgrims, who on hectic pilgrimages to as many as 88 temples on one trip, would get their books quickly stamped by the temples office ( as proof that they had been there) and would then head right off  for the next temple on their list ( now Japanese tourists with busy itineraries pile out of the bus, TAKE A PHOTO and HAVE THEIR PHOTO TAKEN as proof that they`d been there and done that, before they head off for the next attraction on their busy itinerary). 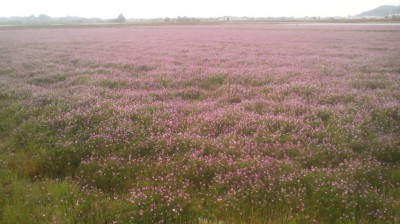 But it is ALSO because, with the modernization of Japan and the dramatic changes which the country`s landscape underwent, that the camera,with its NARROW FIELD OF VIEW which could be used to BLOCK OUT anything deemed unsightly ( and in Japan is so much that IS unsightly), became ESSENTIAL in a culture which placed so much emphasis on the enjoyment of  viewing IDEALIZED  scenes.

With the presence of concrete, steel and plastic felt more and more strongly as the years go by,these days even with the camera`s narrow field of view it is difficult to capture such idealized scenes ( in his later years the great film director Akira Kurosawa lamented the fact that he could no longer film historical drama in Japan. There was just no location available in which there was no obvious evidence of the modern world).

As a reaction to this, it seems that the Japanese have psychologically adapted and aesthetically compromised. In fact, they now do not even need a camera`s selective field of view. They can just IGNORE or mentally BLOCK OUT the elements that  they dont want to see, and IMAGINE an idealized scene!

Maybe you will say that I have lived in Japan for far too long- because the same is starting to be true with me!  You see, despite the presence of all the utility poles (large,small and gigantic), and all their accompanying cables, I always find driving down the long ,straight and narrow agricultural road ( NOMEN DO-RO-) which runs through the rice fields of Kita Oda in Tsukuba City mesmerizingly beautiful.

Of course, Mt Tsukuba, with its irregular, partially crushed M shape is always out there looming ahead in the distance, yet each trip down the road it looks slightly different.  In summer there is of the greenery of the rice plants which grows deeper with each passing day, as the wheat and barley planted alongside the paddy grow golden brown ( in June). 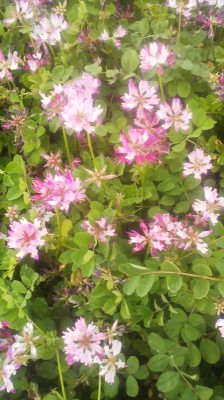 Even in the winter, when the fields are all brown and gray the scene carries a deep sense of stark, earthy beauty.

It is  in May, however, that  turning onto this rice road ( a left off  of Route 57, which is an extention of Nishi Odori) elicits the biggest, and most eye-opening surprise- stretching out to the mountain are a series of rectangular fields of deep pink-purple !!

The interesting thing, though, is that the flowers which make these patterns have NOT been planted as a decoration to attract tourists ( though many DO come to admire and photograph them)- they have been planted as FERTILIZER, and will soon be plowed under and mixed with the soil before rice or wheat are planted! 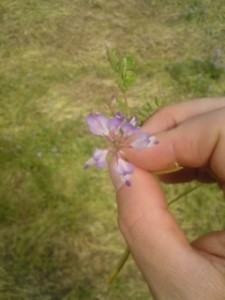 Native to China, genge-so- (紫雲英) or as it is more commonly called, RENGE-SO ( Chinese milk vetch, in English), has long been a typical feature of rural Japan. In recent years, however, this method of enriching the soil has given way to others, and the the carpets which they form in April and may are becoming a less common sight.

Besides being useful as a fertilizer, these flowers can also be eaten ( the young sprouts can be fried or made into tempura). Mature plants can be used as fodder for livestock.

There are are also several medicinal effects which the renge-so plants, and its seeds are reputed to have: reducing fever and relieving the symptoms of arthritis among them.

When I mention these flowers to my elderly aquaintances in Tsukuba, they recalled playing with them back in their childhoods. They would take the hollow stem of a dandelion ( with the top removed so it would be like a straw) and stick a milk vetch flower on top. Blowing through the bottom of the stem the flower would spin like a pin-wheel!

You still have a few more days left to go out to Oda and enjoy the renge-so fields. You can actually go down and walk right through them. The farmers don`t mind now, they will soon be plowed up anyway.

Just be carefull of one thing. Honeybees love these flowers, and some farmers have actually put beehive boxes between the field to gather honey. Dont let this put you off , however, the bees shouldnt bother you if you dont disturb them.

And if you dont mind all the utility poles and wires in the way, you will be able to get some good pics of Japan`s most beautiful fertilizer!

For an article on this same areas summer wheat and barley see:

An excerpt from my new translation of one of Junichi Saga`s books:

To tell the truth, coming across the milk-vetch field in Oda, had a special significance for me- I had just finished translating this passage, from a book entitled HYOSETSU NO BAIKAL (氷雪のバイカル). Its about Dr. Saga`s father`s family moving to Siberia just after the Bolshevik Revolution:

At some point during the journey, I fell asleep. When I awoke, I looked outside and saw the countryside covered in a carpet of purple flowers.

“So that`s what a milk vetch field looks like,” I thought to myself, as I gazed out the window.

When I had first started elementary school, our teacher had taught us about three kinds of flowers: violets, dandelions, and milk-vetch. He asked us to raise our hands if we knew them all. Of the 50 or so students in my class, not one raised a hand. We knew violets and dandelions, but there was no milk-vetch in our area. And since we didn`t have even a single picture book at our school, there was no way we could have known what that flower actually looked like. Looking out the train window on that day, I finally found out. With the sun shining on them, they were truly beautiful, sprawling out to who-knows-where, off in the distance.

Time and again, that flowery landscape came to my mind while were living out in snowy Siberia.