Neither a Hoot nor a Howl – Tsukuba`s Owl-Cafe Adds Insult to Injury to the Sad Plight of the City`s “Mascot” 17 May, 2015 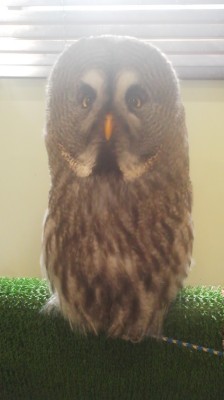 A magnificent Kamchatkan owl -reduced to the miserable fate of a living ornament at the “Owl-House” in Onogawa, Tsukuba.

“Animal Cafes”. They`re the latest thing. Establishments at which customers can, for a fee, spend  some “significant time” with an animal of their choice, while enjoying a beverage and perhaps some food. Depending on the type of “cafe” it is, the animal could be a cat (at a cat cafe), a dog (at  a dog cafe), a snake ( at a reptile cafe), a bunny (at a rabbit cafe) or a bird (you guessed it- at a bird cafe!).

I cannot claim to know very much about the origins of the “animal cafe”, but  someone did open a “cat cafe” ( called Cat Flower Garden) in Taipei, Taiwan, back in 1998 – and that is apparently where and when it all began. It was obviously quite a hit with cat-lovers, novelty-seekers, and the emotionally needy – and the rest is history.

It seems perfectly natural that the idea for such style of cafe sprang up in East Asia – where “hostess-bars” have long been an estabished part of the culture ( and in more recent years there has been the “host bar”, as well.) Establishments at which, for an extra fee, a man (or a woman) can enjoy the company of an attractive member of the oppossite sex, while they have their drinks and snack, and sing their kara-oke songs.

The “animal cafes” are really providing a similar service when you think about it- selling companionship, without the hassles and responsibilites of normal human-human or human-animal relationships. 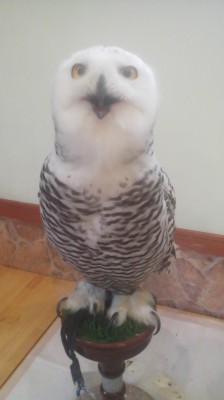 This snowy owl was the most active of all the 18 birds in the “shed”. It was breathing heavily and trying to find ways of getting comfortable on its VERY short leash.

A few months ago, while I was in a car going down the Noda Road in Tsukuba,  I noticed a big, poster-like sign with a photo of an owl on it. It read: ふくろの家 (Fukuro no ie) – the “Owl House”. I had no idea what it was, but was not surprised to see a picture of an owl in Tsukuba. It`s the city mascot- and there are cute owl “characters” on almost everything printed by the city – and there are owl sculptures in the parks, as well.

You see, Tsukuba is now the Science City, a city of learning and scholarship. So some great thinker had the brilliant idea of adopting the same mascot (or guardian animal) as the Greek  center of learnig and philosophy- Athens. Its guardian was the owl (dating back to its agricultural past- the owl, consumer of a vast number of rats and mice were considered protectors of the fields). 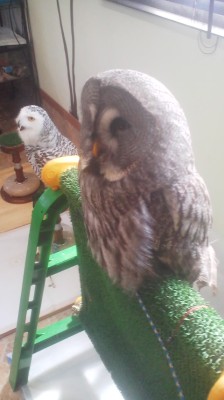 By the window, the owls cannot escape the bright sunlight.

Ironically, there is probably no connection between its selection as the city mascot and the fact that there were  MANY wild owls living within the Tsukuba City limits until very recently.

Some of the most thrilling NATURE moments I have ever had (in my relatively nature-moment-filled life) have been related to these birds- having them swoop silently past me while walking my dog at night, or spotting them at dusk, on the lookout for prey, sitting atop some utility pole or street light.

Sometimes, back when I lived near the Konda Woods (recently clear-cut!), their hooting was so loud and persistent that I could hardly sleep. 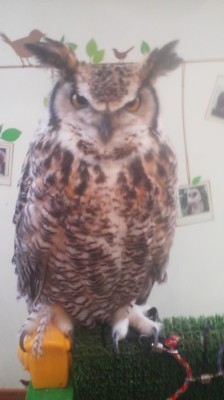 An owl at the the “Owl-House” (Fukuro no ie) in Onogawa, Tsukuba

But that was long ago, when there were still plenty of trees and open fields even near the city center. The fact is that while real-estate agents and the city office itself promote Tsukuba as a green (meaning full of trees) city – the city government and the developers both seem keen on doing as much deforestation as possible.

I haven`t seen or heard a wild owl in more than a year ( the last time was on the Ibaraki University campus in Ami- my heart skipped a beat as I noticed an immense ural owl perched on a lamp-post.) 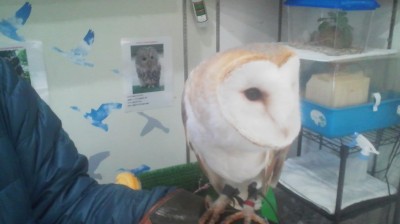 Mamoru-san with an amazing creature on his arm .

Anyway, a few weeks after I had seen saw the sign by the road, I heard from my friend Mamoru Shimizu, who actually lives in the same neighborhhood as the “Owl House”, that what it was- was  an “owl cafe”.

We decided that we would go check it out together. 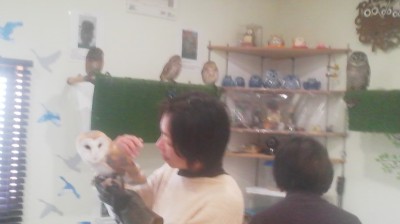 These customers had come from a neighboring prefecture to look at and touch the owls (they had seen a feature about the “owl-cafe” on TV) Note all the little owls in top- they are alive- not figurines!

Mamoru-san was waiting for me in the Owl-house`s small parking lot- really just the front yard to a private home. Between that old house and the busy Noda Road, at the corner of that “parking-lot” there was a small prefabricated structure. That was the “owl-house”.

The distress, for me, began already at the entrance, even before I opened the door. Tethered to a post, exposed to direct sunshine and the roar of the zooming traffic, was a bird of prey. Not an owl, but something like a falcon. Something that I believe you should be looking UP at, soaring free, high in the sky- and not cowering on a pole in a parking lot.

I was thinking of turning back, but Mamoru-san and I had been planning this visit for weeks, and I realized I would have to face the reality of what was inside.

Opening the door and stepping inside- in typical Japanese style you have to take off your shoes at the entrance- I was struck by a strong odor. Not bird-like- but, mouse-like. I realized it must have been the owls` food. With that sensation in my nose I looked around: there, on an assortment of haphazardly made perches, were owls- of all shapes and sizes. 1,2,3,4….. there were 18 of them! At first they appeared to be just figurines, or stuffed and mounted birds- but a loud rattle of a chain-  a sound that rattled my heart along with it, awoke me to the reality that all these live birds were alive and tethered, on very short chains, to their perches. They had almost zero mobility.

The proprietress explained the cafe`s “system” to us. You paid one thousand yen for an hour in the “shed”, with an all you can drink “drink-bar”. We were told that there was no eating inside, and that we had to wash  our hands.

If we so desired, the proprietress would help us to get any bird we wanted to perch on our hand (with a special glove, of course)- though that would not be possible with all of them (some were apparently injured).

There were four other customers already there, and during our “hour” several more came – from a neighboring prefecture. The “Owl-house” had apparently been featured on national television, and had been getting a steady stream of customers seeking “IYASHI”- a soothing of the spirit by communing with these poor creatures.

I just couldn`t get it. To me, these other-wordly, mysterious, magnificent, creatures, chained forever (they really are never moved except for when you take them on your arm!) to a perch, kept as living statues- was not “healing”- it was nerve-fraying. Together with the rodenty smell and the occassional RATTLE of a chain as a bird tried its best to scratch itself, It was like a house of horrors.

If they were used for hunting, and were allowed to experience their own “owlness” or even if their were held in a large aviary I would have felt differently. But there, having these normally shy and ultra-senstive birds, symbols of the night, held down it the bright light for owr pleasure felt like a tresspassing of sorts- a violation.

Our municipal mascot has not only been its driven out of the city by developers, but now as a “cute theme” for a local business they have been doomed to the fate of being “living ornaments” at a cafe.

Not my cup of tea! But as for the “rabbit cafe”- well, now that`s another story.