Double Impact: The Art of Meiji Japan – Thru Sunday May 17th at the University Art Museum, Tokyo University of the Arts, In Ueno 14 May, 2015 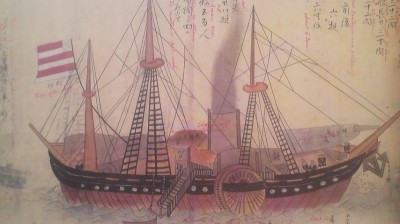 The Meiji Period (1868-1912), during which Japan, through a successful policy of intensive modernization and Westernization, was able to rise up from the isolated backwater it had been for centuries, to the ranks of a world power, is certainly one of the most dramatic and interesting ages in Japanese history – I might even say in all of WORLD history.

The reforms imposed by the Meiji government were comprehsive, affecting near all aspects of daily life: diet (meat-eating was introduced), the calendar (the traditional luni-solar calendar was dropped for the Gregorian- New Year`s was moved to January)- even the clocks were changed! (Before the Meiji period each day was divided into twelve hours whos elengths varied with the season!). The rigid class system was abolished, the samurai lost their special rights- and universal military service was introduced (during the Edo Period it was only the Samurai who could bear arms and do battle).

Listing all the Meiji changes would require an article of encyclopedic length. But, what I do have mention, to get to my point here, is that the arts in Japan also underwent a revolution. The sudden exposure to unfamiliar western techniques and modes of expression had a huge impact on all the various arts in Japan 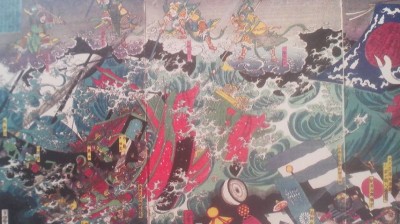 The Defeat of the Mongol Invasion Fleet by Utagawa Yoshitora (1863)- the spirit of the Divine Wind (Kamikaze)- which destroyed two separate invading Mongol fleets, back in the 13th century, was evoked in the mid 19th century when spirit of Revere the Emperor and Expel the Foreigners was running strong

But when I saw the announcement for the latest exhibition at the University Art Museum at Tokyo Geidai (Tokyo University of the Arts)- Double Impact: The Art of Meiji Japan, I took the title to mean that the exhibiton focused on a TWO-WAY influence between Japan and the West. That seemed natural to me because at that time, ART might have been the only field in which Japan actually did have a major impact on Europe and the United States. So, before I got the museum, I thought the exhibition would show both Japanese works impacted by the West, and French Impressionist works (Monet, Manet, etc.) or certain paintings by the American artist Whistler, etc. which show the clear influence of Japanese art. 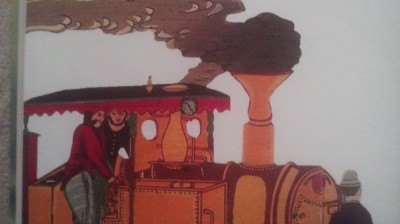 Detail from A Steam Engine on the Railroad at Takanawa by Shosai Ikei (1872). In 1872 a railway was constructed connecting Shinbashi in Tokyo and Yokohama. This steam-engine was made Britain, and until 1879 the engineers who operated it were foreigners

I was wrong ! The DOUBLE of “Double Impact” referred not to two cultures, but to the TWO museums: The Boston Museum of Fine Arts and the Art Museum of the Tokyo University of Art, from whose collections the 149 works on display were taken.

Though this might make the title sound silly, and perhaps even a misuse of the English language, for me it made sense in a way the curators might not have been thinking of – the double impact of a single man: Okakura Tenshin- the founder of Geidai (the Tokyo University of Art) and a former curator of the vast Japanese collection at the Boston Museum of Fine Arts, the history of Japanese art and how it is seen by Westerners.

(I can even take the “DOUBLE” concept further by saying that these two Institutions- the musem in Boston and the Unversity in Tokyo were IMPACTED by TWO MEN : Okakura Tenshin and an American, Ernest Fenollosa- who dedicated many years to helped promote the value of traditional Japanese art to the West, and to the Japanese themselves).

Let me tell you a little about the exhibition: 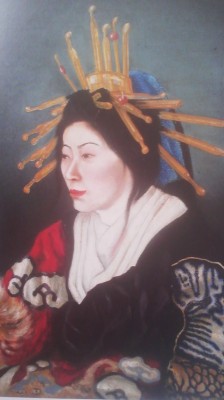 Courtesan (Beauty) by Takahashi Yuichi (1872). Takahashi`s life was changed after seeing western-style prints introduced to Japan sometime after Perry`s arrival, he realized that his true calling was to be a painter in the European-style.

Stepping out of bustling Ueno Station (the one nearest the museum) and into Ueno Park, always get  me thinking about the Meiji Restoration- and I guess that that makes it a perfect place for the exhibition. For much of the Edo Period (1600-1868), Ueno had been the site of a huge Temple complex called Kan ei-ji (construction on it began in 1624). The temple`s  legion of priests, on orders of the Shogunate kept their prayers and rituals going continually  in the belief that they would be protecting the city of Edo, and more importantly (for them) keeping the Tokugawa Family, safe from misfortune- and firmly in power.

After the fall of the Shogunate and the restoration of imperial rule, almost all of Kan ei-ji`s 36 buildings  were burned to the ground- because of their close association with the Tokugawa`s (in the same way that the temple on Mt. Tsukuba, Chisoku Chuzen-ji, also important to the Tokugawas and also protecting Edo from the unlucky north- east direction (kimon), was completely razed- Mt. Tsukuba Shrine was built in its place.)

Based on the advice of a Dutchman, Dr. Antonius Baudin, the former temple grounds, covering an area of almost 300 acres, were turned into what was to become Tokyo`s important public cultural space- Ueno Park, with its zoo ( a pagoda from the Tokugawa`s temple is actually now locating on grounds of the zooligical Park!), and numerous museums and concert halls. So as I walk among the tourists, the pigeons, the freaks, the young  and the homeless, I can`t help but see before me in my mind`s eye, images of the desperate battle that took place right there in what is now the park, between supporters of the Meiji Emperor and 2,000 Samurai loyal to the Shogunate. May 15, 1868. The Samurai were no match for the well-armed Imperial Army troops. Kan ei-ji burned. As I turn the corner and head in the direction of the National Museum, I am walking over the spot where the Great Hall of the Temple had long stood…. I can smell the incense, hear the wierd chanting,,, the banging of drums and gongs….. 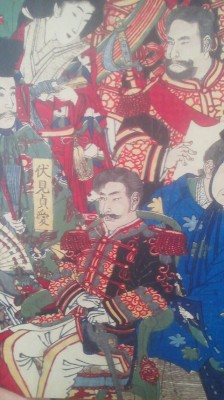 To get to the University Art Museum I walk towards the National Museum, but instead of crossing the street, I turn to the left and walk past the tempting aromas of the roasted sweet-potatoe truck, cross one more narrow lane, and come to the entrance of the Tokyo University of the Arts – memories of the great exhibitions I had seen there  (and written about here) in the past, come flooding back. 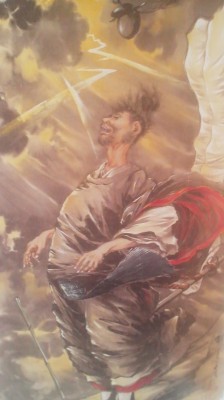 Sugawara Michizane Praying on Tenpai Mountain by Kobayashi Eitaku (early Meiji Period) – with the great scholar Michizane and his bamboo stick caught in mid-air (as if by high speed photography) jolted by a thunder-bolt, the artist shows the early influences of western art in the Meiji Period

Among the nearly 150 works on display, many are of historical interest,detailed prints, whose tiny details give a glimpse of life back in the late 19th century in Tokyo and Yokohama (and also get the old eyes quickly tired!). There are some real curiosities- a little human skeleton rendered in perfectly in ivory, a huge wooden carving of the Emperor Jinmu – looking almost like a great Ainu chieftan, and big byo-bu screens with polar-bears painted on them. 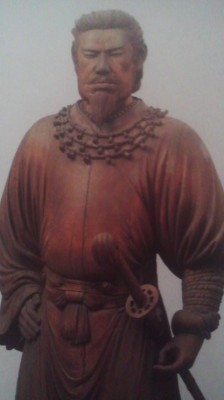 There are even a few works which seemed to me to be of great artistic value- especially some of the more obscure works (which I had never seen before) by the great Meiji Era painter Yokoyama Taikan (whose house by the way, is located near Ueno Park`s Shinobazu Pond and is open to the public). These striking works are representative of a new style of traditional Japanese art- called Nihonga- which I was surprised to learn refers to Japanese painting AFTER the Meiji Restoration. There are also some examples of works painted by  Japanese artist working in a purely Western style- and while “nice”, none of them were very memorable (for me, at least)

But many more of the works shown in the exhibition, seemed to me nothing more than cheesy displays of patriotism. I would have to say theough,  that even when not aesthetically pleasing, l found them to be of historical interest. And I realized that the style which evolved at that time to portray Japan`s myriad deities and mythological heroes is the one still used today to portray the same characters- check out the posters on the TX or Tsukuba`s buses which use the divine couple Izanagi no Mikoto and Izanami no Mikoto to promote the Mt. Tsukuba Shrine (at which the pair is enshrined). 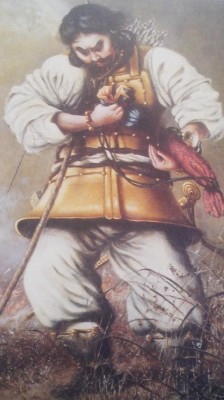 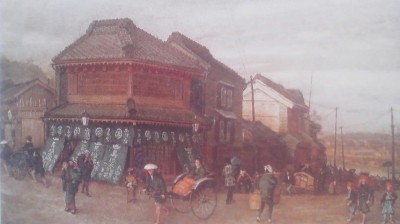 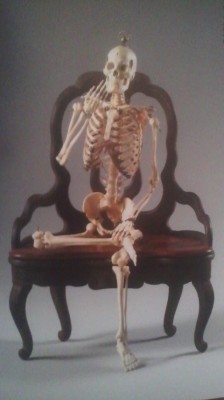 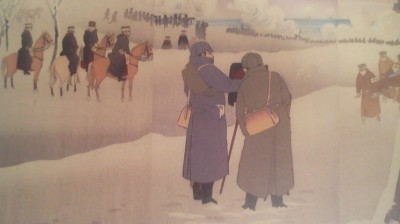 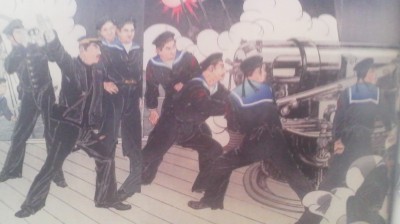 Lieutenant Commander Yamanaka, Chief Gunner of Our Ship Fuji, Fights Fiercely at the Naval Battle at the Entrance of Port Arthur by Migita Toshihida (1904) 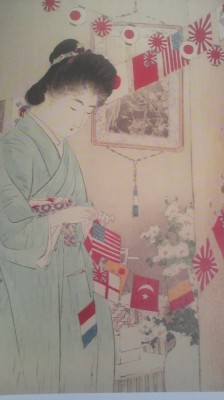 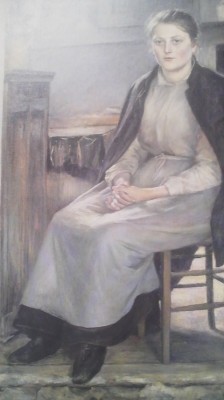 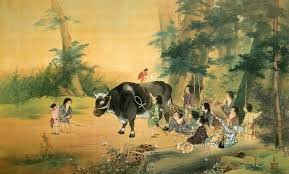