At the Frolicking Animals Picture Scroll Exhibition (鳥獣戯画展) in Ueno, the HUMAN LINE, Impresses More Than the Drawn Line 25 May, 2015

Fully exposed to the elements, the crowds patiently ( and I mean PATIENTLY) wait their turn to pass by one of Japan`s most beloved National Treasures- the Choju Giga (Frolicking Animals Picture Scroll). Being the over-enthusiastic art-appreciator that I am, I got in the line and waited for more than 3 hours- and still got just a passing glimpse of what are called the original “manga” 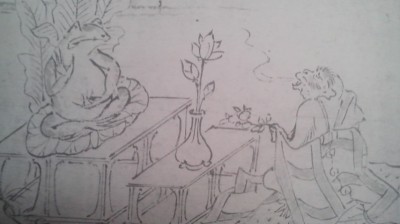 Considered (though not undisputedly) the first manga, the 12th and 13th century Choju Giga (Frolicking Animals) Scroll (actually 4 scrolls) is one of Japan`s most beloved National Treasures- a fact attested to by the extremely long lines that have been forming at the Tokyo National Museum in Ueno to see it (thru June 7th). Here a monkey priest chants a sutra while the frog represents the image of Amida Nyorai.

The art world is very much like the rock n` roll world these days, with superstars on canvas or paper, in wood, stone or metal, house-hold names and cultural icons, drawing huge, arena-like crowds. Just another  way of connecting with fame and celebrity, I guess. Being able to say that you have seen IT with your own eyes- basked in its energies (museum visits can almost seem like religious pilgrimages with visitors expecting somehow to be improved or uplifted or even enlightened by contact with “cultural treasures” or “works of genius”). And not unlike the amulets and trinkets that you can get at a shrine or a temple (or tee-shirts at a rock concert),  you can be sure that there are plenty of dazzlinglly beautiful exhibition-related “goods”- which often seem to be the REAL attraction for visitors (including myself!) 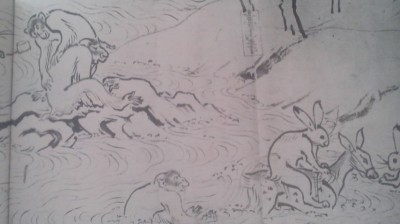 Monkeys and rabbits (one on deer-back)frolicking in the water. This work has been preserved at the Kozanji Temple in Kyoto- though no one is sure how it ended up there, who painted it, or what it is actually about.

And though I had been TOLD about the lines outside the latest extravaganza at the National Museum- Masterpieces of Kosanji Temple: the complete scrolls of Choju Giga, Frolicking Animals- and though I KNEW that in this veritable Manga-Land, the 12th-13th century “Mother-of-all-Manga” would draw huge numbers of visitors- of all ages- (the picture scroll is featured in Japanese school text-books- one of the surest roads to superstardom and house-hold name status in Japan)- and that the wait to get inside would be HOURS- I still could not resist the opportunity of PASSING BEFORE the great art-work  (depite the fact that the complete scrolls can actually be viewed, in their entirety, on-line for free- and at ones own leisure).

No, I could not resist the temptation…… especially because I had conceived of a plan that I thought just might work. 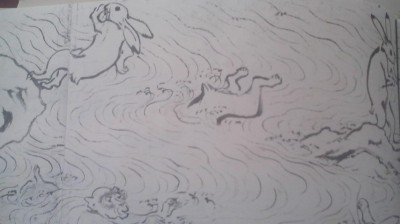 I would go on Friday night – when the museum is open till 8pm! I had done it before at big showings – and with success – especially just before the late closing time, the exhibition halls would clear out, leaving me almost all alone to commune with “culture”.

That`s what I would do- I`d go on Friday night. I`d take off a couple hours from work and head into Tokyo so that I`d make it to the museum at about 5 pm – the regular closing time. 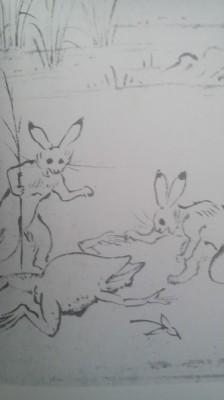 Is the frog just knocked over- or is he dead?

I was so confident in my designs, so self-satisfied with my strategic thinking- certain, that I could beat the system.

But all the best laid plans of mice and men…….

Instead of being able to walk right into the Heisei Kan (the huge hall in which the exhibition is being held), I ran into a line- longer than anything I had ever seen in all my years of Museum going. Hundreds (thousands?) of men and women of all ages (including some children) in quadrupal file.

I could have turned and gone back home- or even gone for a nice meal and a drink (or two) at one of the long list of Tokyo restaurants that I have been meaning to sample.

But I didn`t. Maybe all the years in Japan have dulled my abiltiy to CHANGED PLANS when the situation calls for it. Like all the Japanese people there ( I was the only”Westerner” crazy enogh to have gotten in the line), I had come to see the Choju Giga- and that was what I was going to do- no matter how long it took.

One important thing that tipped the scales toward my staying in line was the fact that my backpack was (as it usually is) stuffed with books. In fact, I had some excellent books on the Choju Giga themselves- that I could use to prime myself for a heightened experience. 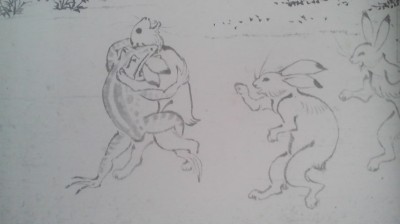 A rabbit and frog wrestling

The sun set, the the moon was bright. I held my book so that it would be bathed in the gentle moon-beams. As the line, slowly, oh so slowly progressed, I had to shift the book towards the moon like a sunflower to the sunshine.

All the others around me, with no books, and perhaps too shy to talk in the line, eyed my book jealously.

But besides that, they just stood- quietly, solemnly, without fussing or fidgeting. It reminded me of a New Year`s Eve pilgrimage to the Meiji Shrine, along with about one million other people who made their way silently, reverently to the huge, money-gobbling donation boxes.

But what the line really reminded me of was how PATIENT the Japanese were after he Great Earthquake of 2011,when the infrastructure had been knocked out- and the traffic signals were, for example, not functioning. No honking, no shouting, no fighting.

That`s what was going on outside the museum- perfect calm, stillness and quiet.

We waited for 3 hours and had still not gotten inthrough the entrance – but we got some good news. The opening hours would be specially extended for one hour- just for us. 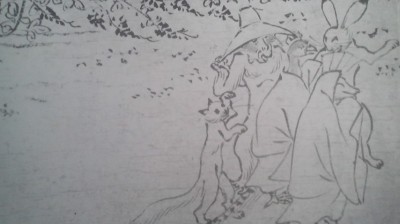 The scroll shows a variety of animals- a fox or a badger- a cat?

So I continued to “hang in there”, book (now a different one) to the moon- and finally, at about 8:30, I crossed the threshold to the Heisei Kan. I flashed my free members` pass at the ticket gate and headed up to the second floor- it was time to rock! But when I got upstairs, I found another very long line – for the Choju Giga, while on the other side of the hall, the galleries showing other “treasures” of  the Kosanji Temple in Kyoto there was hardly a soul.

I opted for the empty space- and was rewarded with some works that made a strong impression- especially the carved wooden deer “koma inu” shrine guardians- which had me quite mezmerized. 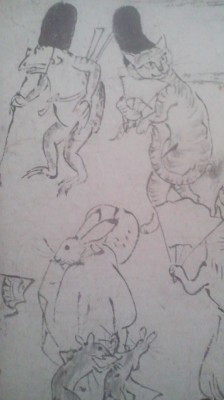 Cats, mice, rabbits and frogs in the Choju Giga

But time was running out- they were announcing closing. Would I leave without seeing the Choju Giga? No, I couldn`t do that. So I got in the line, which was being urged to moved on more and more quickly as 9pm approached- I was reminded of Lenin`s  Mausoleum in Red Square where the guards keep the line filing quicky past the embalmed body of the greatest Bolshevik.

Well, like I did at the tomb in Moscow, I got my quick glimpse. Then I headed to the souvenir shop before heading back to Tsukuba.

While the delicate lines of the unknown artist would have surely been worth close examination had I had the time- I will always associate the Choju Giga Picture Scroll Exhibition with different lines- the ones to get inside on a moon-lit night! 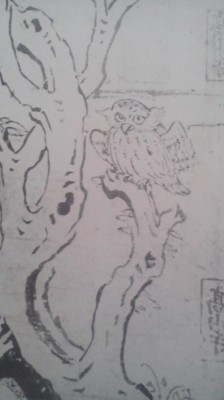 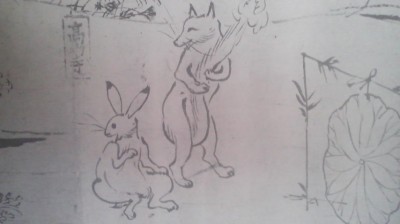 The fox`s tail, used here as a torch to illuminate the archery target is more proof to the theory that all the goings on portrayed in the scrolls take place at night