Rustic Buddhist Masterpieces of Northern Japan- bask in their ancient woody warmth – through April 5th at the National Museum in Ueno 2 April, 2015 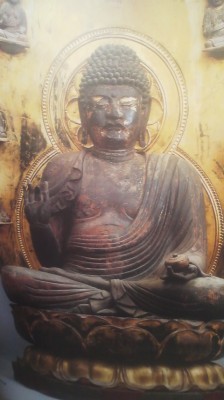 Seated Yakushi Nyorai dated 862 AD from the Kokusekiji Temple in Iwate Prefecture. This statue was brought to the area by Sakanoue no Tamuromaro – the Barbarian Quelling General who “pacified” the local inhabitants (the Ezo), and Carried out a campaign of Japanification in the area- exemplified by this Buddhist image (the religion which then represented the Yamato Court. Amazingly, this work has withstood two of Japan`s greatest recorded eathquakes- the one of March 11th 2011, and the Jokan Earthquake of the year 869 AD

Visiting a ‘special exhibition` held at Japan`s National Museum in Ueno is always a rewarding aesthetic and intellectual experience. Physically, however, it is always an ordeal. Hours spent in long lines fully exposed to exteme elements- and then once inside, an almost complete lack free mobility, as one is carried along from treasure to treasure masterpiece to masterpiece, at the will of the ocean-like, slow-flowing crowd.

Then there is of course the sheer number of items to be viewed –  which would exhaust you even if you were the only one there. 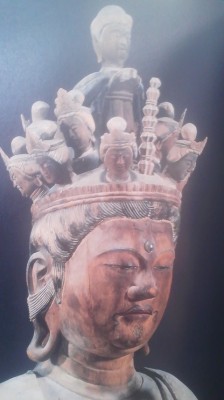 Happily, though, the first big special exhibiton of 2015 – Buddhist Statues from Northern Japan – has proven to be extremely do-able, with only 19 works on display- and much smaller than usual crowds. In other words, you get all the usual benefits of a first-class showing – without the physical punishment.

The reason for the down-sizing in scale is the simple fact that the Heisei Hall, where the big events are normally held, is now being renovated.

The smaller crowds are a bit harder to explain-  I would say its probably because (except for statue No. 8) the works on display are not classified as National Treasures, nor are they by big-name artists, or from any famous temples or collections – they are for the most part obscure works from an area which most people don`t usually associate with classical Japanese culture- MICHINOKU- the north-eastern part of Honshu (Japan`s largest island). 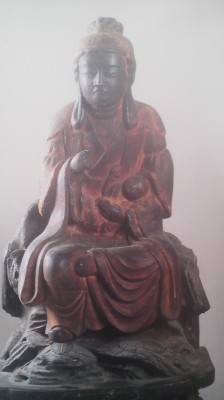 Kishibo-jin – represents a woman who had formerly survived by killing and eating infants, but then converted to Buddhism and went on to become a kind of guardian saint for children. It is my personal opinion, that the Buddhist missionaries used Kishibojin as a part of a campaign to stop infanticide- which in past ages was commonly in the poor northern regions. (even today, a typical folk-craft of that region is the Kokeshi Doll – a kind of consolation to the spirits of the children who had been abandoned)

With the Heisei Hall unavailable, the show is set up in the relatively small space at the back of the main entrance-hall to the main building- a massive, grand affair in the European-style, made of heavy-looking, cool stone (marble?).

Almost as soon as I entered that imposing space- I could catch a glimpse of what I would find inside the exhibition, the warm glow of wood – very old, richly textured wood, being emitted from the the opening to the back room. 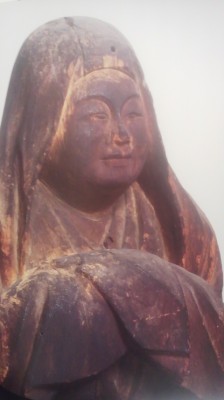 Seated female deity 12th-13th century Aomori Prefecture. Recently discovered at at the Keikoin Temple – this sculpture was carved from a single block of wood.

As if under a spell I was drawn in- almost forgetting to show my special ticket (there is an extra fee for the show)- only to be stopped by the stern museum staff manning the ticket desk at the door.

From the very first works I was greeted by, I realized that this was just the sort of exhibition for me- someone who has long and deeply appreciated the way Japanese artists have worked in wood.

Right by the door, straight ahead, is an 11th century Standing Kannon Bosatsu usually found at the Tendaiji Temple in Iwate Prefecture. The tasteful lighting brought out all the beauty of this work – the visible chisel marks creating a beautiful undulating texture in the wood – Japanese Judas tree (katsura). One hand has elegantly long fingers while those on the other have been broken off. 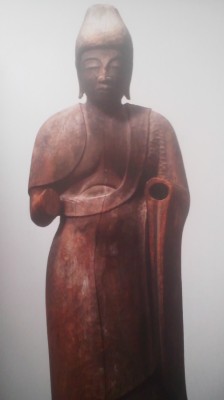 Standing Nyorai (11th century) Iwate Prefecture. this work was so smooth and earthen colored that I first mistook it for a giant clay figurine.

Turning to the left I found four more standing images. One a Nyorai from the same same Tendaiji Temple (this one was so smoothly surfaced and earthen colored that I at first mistook it for a giant clay figurine!) and the rest Boddhisatvas from the Kichijoin Temple in Yamagata Prefecture (from the 11th and 10th centuries!)

Why the exclamation mark after the dates? Well, we just do not imagine there being Buddhist images THAT old from that region- so far from the religious centers of Nara and then Kyoto- in fact not even fully part of Japan at that time. 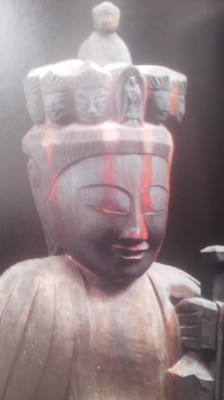 Standing Juichimen Kannon by Enku (17th century). Enku traveled Northern Japan (including the island of Hokkaido!) making Buddhist images wherever he went – that was how he paid his way! He made Tens of thousands of images- some very tiny- and a few carved into living trees. The present exhibition presents three large Enku works

So right away this got me thinking. The explanation boards ( in both English and Japanese) proclaimed:

“The northeastern area of Japan, called the Michinoku region, is home to many attractive Buddhist statues. Their faces are filled with a powerful yet gentle human kindness, rather than expressions of enlightened, transcendent beings. This exhibition features representative examples of Buddhist sculpture from Northern Japan”

But I think these works represented something much more interesting than just gentle expressions-  they reveal how art and religion were used to bring a far-off untamed region INTO THE REALM and into the fold of the culture that would eventually come to (almost absolutely) dominate the archipelago – what we now call Japanes culture. 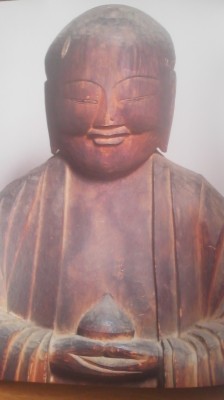 Buddhism had been embraced by the Imperial Family and the nobles by the mid-6th century. It represented the knowledge (including medicine, engineering etc.), power, and culture of the great continental civilizations in China and Korea. The first Imperially sponsored Buddhist images were made in Japan in 606 AD and then in 710, when the capital was moved to Nara, Buddhism really took off in Japan. The great Todaiji Temple was completed in 753. Gifts were sent from as far away as Persia to commemorate the event (these are housed in the Sho-so-in Treasure House in Nara).

As part of a reorganization of the areas under control of the Yamato (Japanese) Court, the Kokubunji ( National Temple) system was implemented in 741 AD. Under this system, each province of Japan would have its own Kokubunji, manned by priests who who pray and maintain rituals for the security of the realm ( in this area, what is now Ibaraki, the Kokubunji was in what is now Ishioka City, on the other side of Mt. Tsukuba).

Though the northern part of Honshu still remained far from subdued at that time, there was one major  Yamato outpost in the area -Sendai- now the North-East`s largest city. 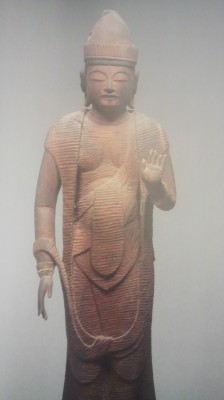 The work at the far left corner of the exhibition space is one the best examples of what I am trying to say- it was dedicated in the year 862 AD, by the Barbarian-Subduing-General Saka no Ue no Tamuro maro who spent years “pacifying” the unruly inhabitants of the North East and bringing them into the fold.

So for me, the solemn figure represents much more than just gentleness and kindness. Its represents the defeat of one culture and its replacemtn by another- not willingly as had happened in western Japan, but by conquest.

This would make it similar to the oldest Christian images found in Central America – introduced after (or while) the native cultures were being destroyed. 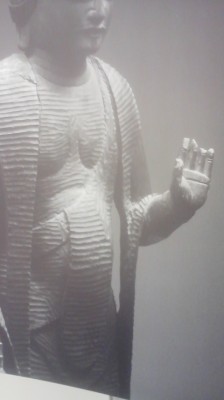 Another very interesting work for me was the small statue of Kishibojin – quite a rare image in Japan ( at least as far as my experience goes).In Buddhist lore Kishibojin was originally a heartless woman who fed her own brood on the flesh of children she had abducted. After having SEEN THE LIGHT, though, and  converting to the Path of the Buddha, she became a great protector of children (something like their patron saint).

It seemed to me that the existence of this image shows how Buddhist missionaries tried to impress upon the local people the evils of infanticide- a common pracitice in that area in past ages. 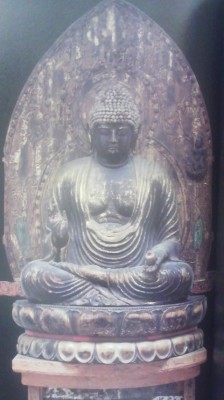 Seated Yakushi Nyorai- the only work in this exhibition designated a National Treasure has a special siginificance for Tsukuba residents as it is connected with the priest Tokuitsu, who built the first Buddhist temple on the sight of what is now the Mt. Tsukuba Shrine

As a sort of dessert to this little feast of wooded beauty are three charming works by Enku, who traveled northern Japan- including Hokkaido- making Buddhist images,wherever he went.

With a chance to enjoy these special works in such a small uncrowded space at such leisure, I am sure I will carry the images in my minds eye , wherever I happen to journey. 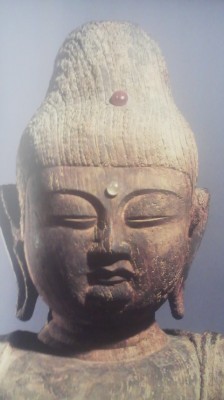 Seated Yakushi Nyorai (9th Century) from the Sorinji Temple in Miyagi Prefecture. Probably represent the style of the original Kokubunji (National Temple System) effected in the 8th century. The original National Temple in the North Eastern frontier lands was in Miyagi Prefecture. Made out of zelkova wood, and according to temple lore it was dedicated by the great Tendai sect priest Saicho. 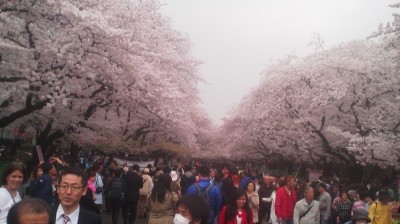 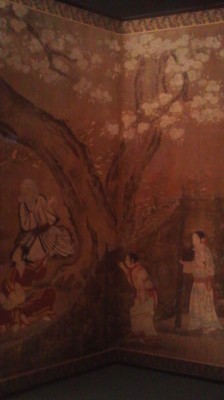 Revelry under the cherry blossom – at present the museum is also displaying numerous works from its vast collection related to cherry blossom viewing! 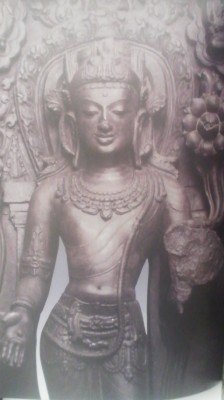 It is interesting to compare the rustic wooden MICHINOKU statues with the works at a special exhibition in the next building -showing Buddhist works from India which are rendered in stone.