A field of moss Flox (shibazakura, 芝桜) in Karima, Tsukuba

I opened the door and felt my face was gently lapped by the spring breeze- which  as I stepped out I soon realized carried with it, in patches that could be detected on and off, the sweet smells of the season`s flowers.

Walking down the road, heading towards the university, I saw many of them- planted in front of my neighbors homes- in gentle, soothing, warming colors…..

I passed a small park. With all the young leaves just come out, I wondered at how many  shades there were there that fell within the range of the color we call green.

I crossed a major intersection. I saw a small vermillion Inari Shrine off in the distance and thought of how naked and lonely it now looks since the sacred grove around it was cut down…….. 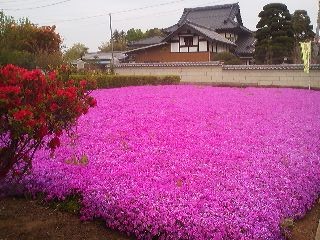 Then I turned the corner and it all turned purple ! Before me was a near perfect square which made my eyes pulsate and my head spin.

I had experienced pain from the brightness of light before- but never from the intesity of mere color. I could FEEL the purple (or whatever the exact name of the shade you see in the photo is)- and stood frozen by the road before I regained my senses pulled myself away.

A field of moss phlox- a hardy, low growing flower originally from North America, which has become popular as a decorative plant in Japan. 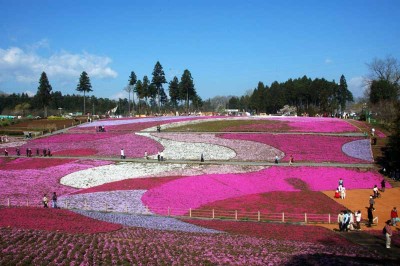 Shibazakura blooms in various colors and the Japanese have taken creating patterns on the ground with them in front of homes or in parks.

A couple of days after my encounter with the moss phlox in Tsukuba, I happened to be in Tokyo at a station along the Seibu Line. There I saw posters promoting a flower park in Chichibu, Saitama Prefecture whose main attraction in April and May is its the color patterns of SHIBAZAKURA created on its rolling hills.

Doing a search on the internet, I found at least 12 places which were considered MEISHO- (名所)- famous spots, for moss phlox.

Here is a link to such a place in Yamanashi Prefecture, with an excellent view of Mt. Fuji. The website has a live web-cam so that you keep track, minute by minute, of the moss phlox situation there

If you go- don`t forget your sunglasses to protect you from the intensity of color ! 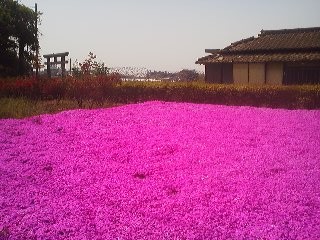 Shibazakua in Karima, Tsukuba (with torii gate in background) 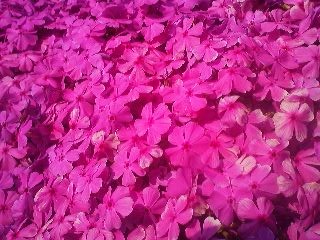 Close-up of a shibazakura field 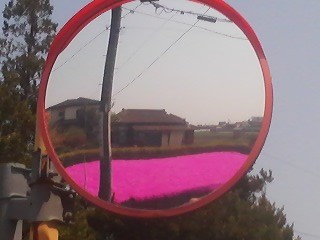