High Fidelity in the Tsukuba Countryside at the Jazz Cafe Omega- and a little on the history of Jazz Kisa (Jazz Cafes) in Japan 18 March, 2015 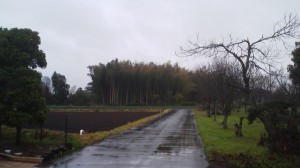 Amidst this idyllic pastoral setting in Tsukuba, I came upon…..

I have been exploring Tsukuba- its major by-ways as well as its nooks and crannies, for many years now. Still, almost every time I set out ( and that is usually a few times a week!) I make new discoveries. I guess I should not be surprised anymore- but the fact is- I always am!

Today, I had about an hour between appointments, and found myself along Route 408 ( one of Tsukuba`s major thoroughfares) near the Research Institute for Forestry and Forest Products ( the Shinrin So-go- Kenkyusho). I decided on a whim to head to the west, turning at the 7-11, and drive through the rustic hamlets which make up the old town of Kukizaki, which is now part of Tsukuba City.

My eyes were soothed by the fresh greenery emerging in the gentle spring drizzle. All around were deep brown vegetable fields waiting to be planted, and small plantations of cedar growing on their fringes.

I was on the lookout for sacred stones and small shrines and temples, or any evidence of local folk beliefs or customs.

Instead, what caught my eye, was a sign which read: JAZZ CAFE OMEGA.

I instinctively veered in the direction to which the sign pointed and soon found myself in front of a beautiful ( and expensive looking) new house- which according to another small sign was the establishment I was looking for. 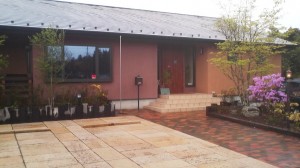 this sleek looking new house- with a sign which reads: Jazz Cafe Omega, posted by the driveway

There were no cars in the customers` parking area, though there was a Volvo ( which I assumed was the proprieters) parked in a specially reserved spot. I wasn`t sure if the place was open for business or not- so I tried the door. It opened and I stepped  in. As I did, I was greeted by a voice calling out from somewhere around a corner, and by a sign which told me to take off my shoes and put on slippers.

The interior was simple and elegant with plenty of warmly colored and grained wood. I stepped to the left where I came to a counter facing into the kitchen. Here I first encountered the friendly and helpful Mr. Tadao Shoji,  the gentleman who built and runs the jazz cafe. He showed me a selection of 4 different types of coffee I could choose from (600 Yen each), and then asked me if I had brought any records or cd`s along with me that I had wanted to listen to.

I told him that I had come bare-handed and ordered some coffee. He then ushered me into what I soon realized was the heart of this establishment- 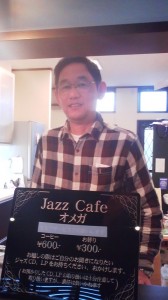 A very large and elegantly appointed wood and stone listening room- decked out with one of the most impressive sound systems I have ever seen ( not that I am an expert on sound systems).

Facing the speakers were five or six comfortable looking chairs which had little attachments on them for which to place coffee mugs and books.

When I entered,there was jazz on blaring at a high volume. In fact, I couldnt hear what I was being told. So I just sat down, waited for my coffee, enjoyed the tunes, and ogled the space. 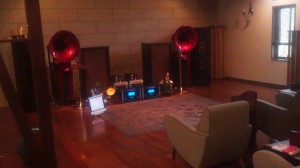 I then stepped into the centerpiece of the establishment: The Listening Room- with its state-of-the-art sound system, comfortable chairs and tastefull decor

When my big heaping cup o` did arrive ( whith a few little cookies on the side), Mr. Shoji turned the sound down a bit so that we could chat.

He told me that he had hundreds of Jazz cd`s on his computer and that using an iPad ( which he handed me) I couls listen to whatever I liked. He also said that if ever I wanted to bring a cd or LP of my own that I wanted to hear on his system, I was welcome to.

If there were no other customers, I could listen to whatever I liked for as long as I liked. If there were others, however, it had to be jazz. If more than one customer had a request it was first come first served with a limit of one album side per customer.

I selected and enjoyed a few familiar tracks from the iPad, and then asked Shoi-San to play me some of his favorites. 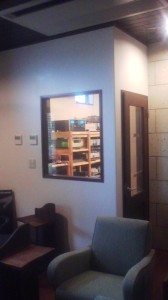 The control room and kitchen (only coffee, juice, and cookies are served) can be seen through this window

Tadao Shoji was born and raised in Tokyo`s Shita Machi ( the old merchants quarter) and has long run a successful important and export firm specializing in optics. With some land up here in Ibaraki, he decided to build a house and also to turn his love of jazz music and high fidelity audio into something more than the hobby it had long been.

He imagined creating an establishment which would cater to other jazz lovers- especially those who have retired and have  free time before it gets dark.

Yes- there is one hitch for anyone interested visiting the Jazz Cafe Omega and enjoying its amazing sound system and warm interior- it is only open on weekdays from 10 am to 6pm! 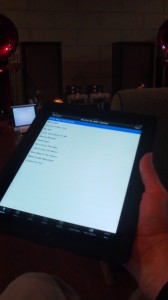 Now some of you might be wondering just what I mean by a Jazz Cafe. Well, let me try to expalin a bit about this UNIQUE ( I believe) Japanese phenomenon.

In the 1950`s and 60`s Jazz Cafes (called Jazu Kisa, in Japanese) sprang up across the country, not only because of the popularity of Jazz among certain people, but also because few people could afford high quality sound systems, amass large LP collections, or have a living space in which one could paly laoud music with disturbing neighbors. Jazz Kisa created spaces in which jazz lovers could gather, and listen to a wide range of material (old or new) on a good sound system.

There is also a certain etiquette which developed in these establishments ( though of course there is some variation at individual cafes. Most importantly: NO CHATTING or TAPPING TO THE BEAT! These places are for serious listeners! In fact, one of my friends who used to work as a waitress at a Jazz Kisa in Sapporro, Hokkaido told me that when she took orders, the customers would indicate what they wanted by pointing at a menu, and then she would use hand-signals to communicate with the kitchen.

In the 60`s such cafes became strongly connected with the counter-culture and with the radical student movement ( GAKUSEI UNDO), which rocked Tokyo in the lattter part of that decade.

The interiors of the Jazz Cafes were also distincitve in their dark, plush, and shabby interiors. The atmoshere was accented usually with generous amounts of cigarette smoke swrling in the air.

They would also typically stay open until the early hous of the morn- so that customers who missed their last trains could catch the first ones in the morning.

The Jazz Cafe Omega fits in with the typical Jazz Kisa model in terms of its no chatting or tapping policy, as well as in its furniture- no tables: just lounge-chairs..

The sleek Japano-Scandinavian interior and no-smoking (indoors) policy gives it quite a different touch, however. The greatest difference, however, must be the fact that the Omega is closed nights, weekends, and holidays.

Though Japan is often said to have a homogenous culture, it is important to note that this one mainstream culture contains what seems like countless SUB-CULTURES with afficionados who do not like to step out of the bounds of their own favored genres or hobbies.

Visiting a Jazz Cafe is one way of familirize yourself with one of post-war Japan`s greatest suuch sub-cultures. You will be amazed by how much those who are part of this world know about jazz ( and many can play it extremely well, too!).

To get to the Jazz Cafe Omega from central Tsukuba. head down Route 4o8 travel towards Ushiku. There will be a 7-11 eventually on your right, Turn right at that corner and go straight, soon you will see a sign ( on the right-hand side of the road) pointing you to the Omega.

Dont forget to bring your favorite jazz CD or LP!