Tokyo`s ‘Ultra-Violent’ Crows Help Get My Year Off to an Inauspicious Start 21 January, 2015 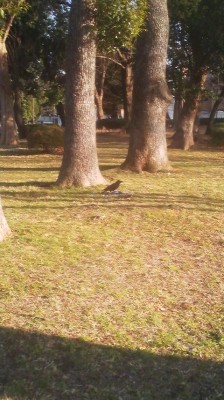 Crow pinning down a pigeon at Ueno Park just across the street from the entrance to National Museum. Could this behaviour be the result of there being less garbage put out over the New Year`s Holiday? 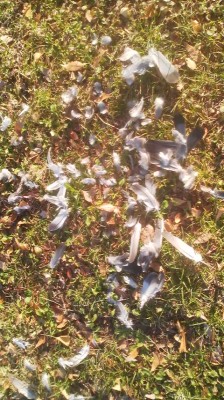 A minute earlier a plump, healthy pigeon had been foraging happily on the grass – this was all that remained after the crows had gotten to it.

Traditionally in Japan, the first week of January is a time to amass enough ‘positive energies’ and good fortune to carry one through to the end of the year. This is done (according to custom) by coming into contact in various ways with symbolically auspicious items called ENGI MONO (縁起物) – with the source of each item`s ‘luckiness’ lying in its color ( red for example is believed to drive away misfortune,  while white is pure) shape ( a shrimps curved back represents attaining an advanced age), the sound of its name (the Japanese orange`s name – DAIDAI is a homophone for FROM GENERATION TO GENERATION- represents continuance of a family`s name and fortune), or some other characteristic (pine trees don`t turn brown or lose their needles in winter and thus represent vigor and long-life).

To work their magic (according to tradition) these  lucky items can be:

Displayed at home ( the KADO MATSU ENTRANCEWAY PINES,  and the SHIMENAWA SACRED ROPE, and SACRED SAKAKI LEAVES, a figurine or picture of a particular year`s zodiac animal)

Experienced ( a visit to a great shrine or temple, attending performance by a great orchestra or kabuki actor, or watching a SHISHIMAI lion dance. Also any contact with a great personage, whether directly-  such as meeting a sumo wrestler-  or through their works- at an exhibition-  is considered auspicious at the beginning of the New Year)

(There are many many more ENGI MONO, but If I keep on compiling this list, you might be discouraged from reading on………..) 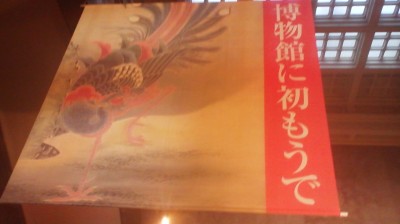 Doing any of these things would help you compile good fortune and in the Japanese language doing so is called ENGI WO KATSUGU (縁起を担ぐ).

My own personal tradition for gathering in ‘ENGI’ – one that I have followed for the past twelve years, is making a New Year`s visit to the Tokyo National Museum in Ueno. For the past 12 years- yes, I have been there each time! – from January 2nd thru January 12th, the museum has held special exhibitions of AUSPICIOUS ITEMS with a special focus on works which represent the yearly zodiac animal (and since there are twelve such animals it means that this year the full set has been completed ! )

The curators usually assemble a wonderful variety of appropriately motifed works – and I was especially curious this year- because when I thought about it, no particular sheep-themed works of Japanese art came to mind ! What kind of exhibition could they have prepared?

Adding further to my enthusiasm for this ‘pilgrimage’ to Tokyo`s venerable Shrine- of- Culture was the fact that I have a museum passport that gives me one year of FREE ENTRY (for 4,000 Yen a great value!) Another trip meant more savings – auspicious indeed! 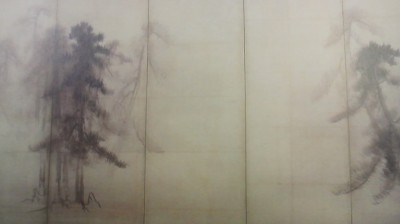 I was in such good spirits getting out of Ueno station that I almost skipped through the park towards the museum. The air was brisk and refreshing, I had no appointments for the day, my belly was of symbolically lucky foods – I had my free pass in hand.

And then, just as I approached the road which had to be crossed to reach the museums front-gate, there was a muffled yet explosive flutter of feathers and wings, and when I turned my head in its direction I saw a flock of pigeons taking to the air. A typical Ueno Park scene.

But something was different- ominous. I stopped and and let my eyes focus on the spot from where I could calculate the pigeons had taken off from. Strange movement. A crow ! What`S he doing? What has he got?

I stepped onto the grass for a closer look. 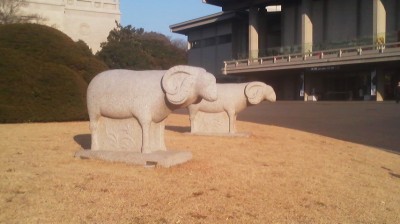 Stone sheep from the Korean Peninsula (18th-19th centuries) displayed outside the National Museum in celebration of the onset of the Year of the Sheep. These sculptures were created to protect the graves of Korean kings.

Under the crows feet, pinned flat down on the ground was a pigeon- still alive and struggling. Before I could react any further the crow had torn out huge clumps of feathers and various body parts.

I don`t care to describe any further details- I will stop by saying that it was not something that I wanted to see, And I`m sure you dont want any more of the very gory details.

The only consolation for the pigeon was that it was all over quite quickly. Other crows joined in on the party – and like a cow that has fallen into a pirana-filled area of the Amazon, the bird was consumed in minutes- nothing left but a few feathers littering the grass. 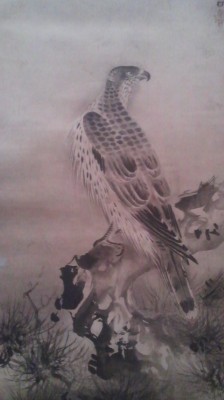 A goshawk with pine trees (16th century) painted by Sesson – considered very auspicious in Japan, this bird was prized by Emperors and Shoguns alike and they were trained for the sport of falconry. (Important Cultural Property)

Not a good way to start off the year. Not for me – and definitely not for the pigeon.

This gruesome scene naturally put a crimp in my day and I couldn`t really enjoy the museum`s interesting collection of AUSPICIOUS ART WORK for the New Year.

I did take some pictures though, and I`ve decided to upload them here, and have another look, hoping that some of the POSITIVE ENERGIES (ENGI) seep in and stick with me this time.

I hope they work for you as well. 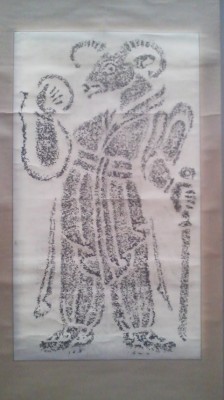 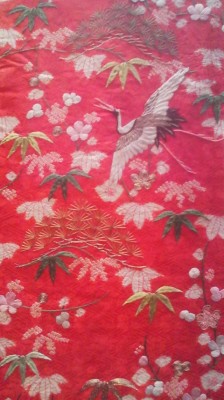 Crane motifed kimono. These are another bird considered highly auspicious- because they are long-lived, beautiful, and mate for life. 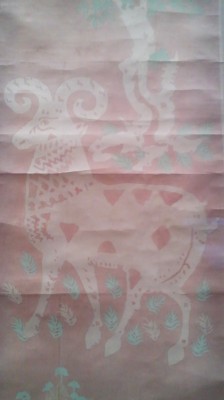 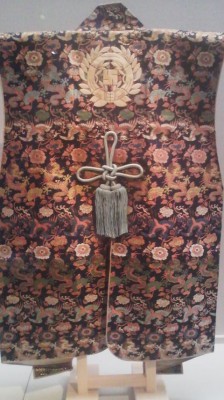 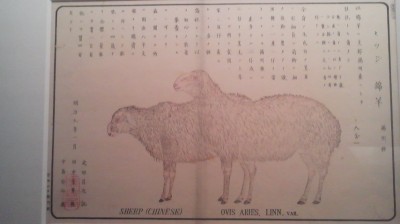 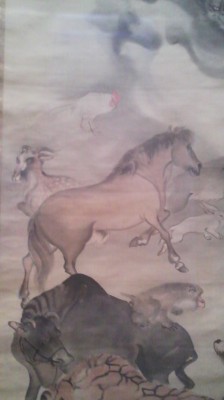 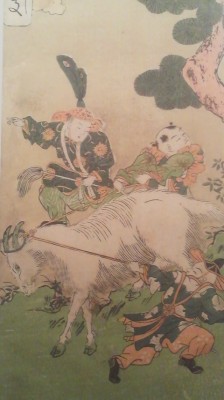 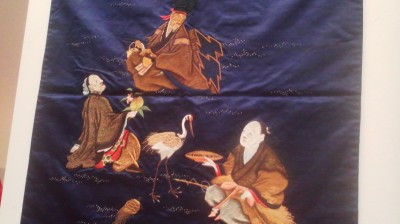 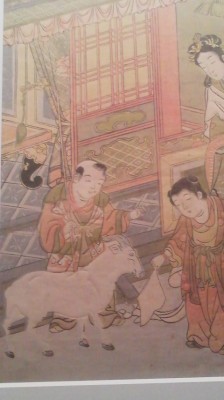 HOW THE CROWS TRIED TO KILL MY DOG

Writing about the crows in Ueno Park reminded me of Tsukuba`s crows and their ingeniously diabolical strategy they applied in trying to kill one of their most vocal foes- my old dog Tickles.

Tickles, a female mixed-shiba inu who looked and acted somewhat like an Australian dingo, wandered into my garden as a puppy. She must have been attracted to the bread I had thrown out into the yard to feed the wild birds during winter.

Maybe it was because that was how we originally got together, BREAD always remained one of her favorite snacks throughout her long life.

I think one reason Tickles stayed so youthful for so long was that she was never chained or tied- but could go in and out of my house freely. And just as much as she loved bread- she hated crows. She chased them whenever she could and when they took refuge in places she couldn`t reach she would bark at them for as long as they could endure the racket- she was a stubborn girl Ol` Tickles.

But crows conceived of a brilliant way of getting rid of her- and probably of eating her!

This was their plan.

Crows in Japan often eat road-kill. Especially in the very early mornings before the traffic gets too heavy. In my old neighborhood of Konda, Tsukuba , there was plenty for the crows to dine on- racoon dog (tanuki) badger , palm civet, and plain old cats and dogs.

So the crows knew that the road brought death to animals, and they also must have thought of it as a place to eat.

So what they did with my dog was to lure her out onto the road and keep her out in the middle of it. They who land at a distance from her. Caw caw loudly and start hopping away- towards the road. When Tickles took to the chase, they would take to the air and hover over the road. Caught up in the excitment of pursuit, she would forget to pay attention to cars of which she was normally very weary.

Fortunately,  time and again, drivers were alert (and kind) enough to slow down or stop before hitting her.

The crows would eventually tire of hovering over the road – and Tickles of barking….. but the crows never did give up on trying to get tickles, and eventually, when she was very old she WAS finally hit bty a car. I can`t be sure, but I can`t help but suspect that it was her old foes the crows that lured her out to the road one last time.