HANABIRAMOCHI ( 花びら餅 )- a Japanese sweet for January which has roots in an ancient court ceremony 20 January, 2015 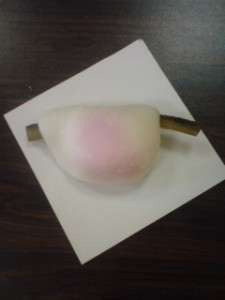 Since the Tsukuba Science City lies amidst the centuries old, rustic hamlets ( MURA) of rural Ibaraki Prefecture, it is  naturally a great place in which to familiarize oneself with the traditional culture and customs of this area.  What makes this small  city even more interesting, however, is that besides the presence of the families who have lived here for generations, there is a disproportionally large number of NEW RESIDENTS ( shin jumin) who have come from all corners of the Japanese Archipelgo, to live and work here, often in connection with the many research facilities and institutions of higher learning for which our city is now famous.

Over the years, right here in Tsukuba, I have been lucky enough to get to know Japanese from all parts of the country, including its most remote corners and hard to reach islands. Not only have these encounters enriched my knowledge of Japan`s varied folk customs, dialects and regional attitudes, but they have also made it possible for me to share in the edible BOUNTY of these various locales, either by the generous sharing out of the contents CARE PACKAGES sent by parents or grandparents, or by receiving OMIYAGE ( gifts) brought back to Tsukuba after New Year`s or O-Bon ( summertime)  hometown visits.

So far, the most interesting such treat Ive had this year has been something brought by my friend Makiko-San, from her native Kyoto- HANABIRAMOCHI ( literally flower petal rice cakes)- a soft, folded- over patty of pounded rice ( dyed slightly pink) filled with miso bean paste, a layer of pink hishimochi ( another type of rice cake, diamond shaped) and most distinctively, a  slim stalk of burdock root ( gobo) running through and sticking out at both ends. 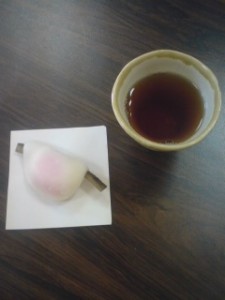 Taken together with tea, these traditional sweets were sublimely tasty, and memorable for the rare combination of  the chewy, sweet rice and hard, slightly bitter gobo.

What has made the encounter with hanabiramochi even more interesting interesting for me, though, has been studying about their history and symbolic significance.

Well, the roots of these curious mochi cakes, stuffed with white miso bean paste and a stick of gobo can be traced back to an ancient ritual called the HA KATEME ( 歯固め儀式) which during the Heian Period ( 794-1185),was carried out  during the first days of the New Year at  the old Imperial Palace in Kyoto with the aim of bestowing good health and long life on the Emperor and his family.

Ha Katame (歯固め) literally means hardening of the teeth, and the reasoning behind the ritual was that if hard food were eaten, the teeth, and thus the rest of ones constitution would be strengthened. The teeth are not only a RENEWABLE part of our bodies ( our baby teeth are replaced by our adult teeth), but the Kanji character for tooth is an element of the character for age-  齢, and thus the ancient Chinese and Japanese found a connection between teeth, life, aging and a new year.

Records reveal that in this ceremony the meat of deer and wild boar, as well as dried ayu ( sweet fish), daikon radish and gourd  (all considered hard foods)  were each placed separately on top of round, round rice cakes which had diamond shaped Hishimochi on top.

The dried ayu was also significant because one way of writing the name of this fish in Japanese is 年魚, which literally means the YEAR FISH ( because its lifespan is about one year in length), and thus connecting it by name with NEW YEARS.

As the generations passed, these offerings tranformed into part of the array of the usual O-Sechi dishes ( New Year`s dishes) of the Imperial court,  eaten with the ZONI ( New Year`s soup) which in Kyoto, was made with white miso paste. The various toppings, it seems, eventually came to be stuffed into the rice cakes instead of being placed on top.

Eventually, probably sometime in the Edo Period ( 1600-1868) the sweet fish ( ayu) came to be replaced by a stick of GOBO ( burdock root) and two layers of  mochi ( one round, and one diamond shaped) was also stuffed with white miso bean paste to represent the white miso of the New Year`s zoni ( soup). These little cakes were called HISHIHANABIRA , with the hishi meaning the diamond shaped rice cake, and hanabira ( flower petal), referring to the round type. The juxtaposition of these two shapes had great significance for traditional Japanese divination ( OMYODO), as it represented all things, or the universe.

The delicate pink glow of these sweets was obtained by a layer of  colored ,diamond shaped hishimochi wrapped under the layer of white, round mochi,  and this creates a resemblance to the plum blossom, which is the first blossom of the new year and an auspicious symbol of the season .

The court had comissioned  two traditional Japanese confectioners, Kawabata Doki ( 川端道喜) and Tora-Ya, to make these hishihanabira, which were distributed  as gifts by the Imperial Family to the aristocracy. Please note that in those days these rice cakes were NOT sweet, as they are today.

It was not until after the Meiji Restoration ( or should I say revolution) of 1868,that these rice cakes were made available to the townspeople of Kyoto. Not only was the mochi slightly sweetened, but  their name was changed to Hanabiramochi.

Important for the history of these New Year cakes is that in the Meiji Period, the head of the Ura Senke school of Tea Ceromony got special permission to use them for the HATSU GAMA ( first tea ceremony of the year).

Because of this, anyone you know who is a practioner of the tea ceremony will be familiar with these sweets. It is interesting, that when a tea groups HATSU GAMA cannot be held until February, they have to freeze the hanabira mochi which they buy in early January.

I`d like to thank Makiko-San for the special taste experience , and for showing me once again that in Japan, whatever you take a close look at turns out to be fascinating.