The Treasure Trove of Sacred Offerings Found on Okinoshima Island (part of the Munakata Shrine in Fukuoka)- my pick for best exhibition of 2014 26 December, 2014 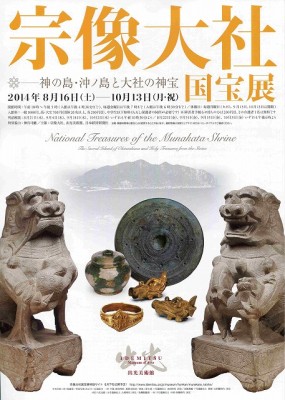 My pick for the best exhibition in Tokyo of 2014: The National  Treasures of Munakata Shrine and the Sacred Island of Okinoshima Exhibition which was held at the Idemitsu Museum of Arts 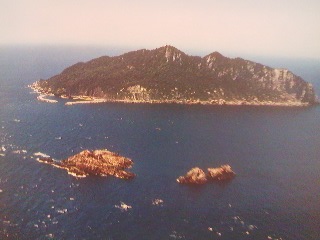 Located about 50 km off the shore of northern Kyushu, Okinoshima Island has been regarded sacred since ancient times. Between the 4th and 9th centuries travellers between Japan and the Asian continent would leave offerings there in the hope that doing so would guarantee a safe journey and a successful mission. Of the approximately 80,000 artifacts discovered on the island in 20th century surveys, ALL (yes, that means all 80,000!) have been designated as  National Treasures. Some of the most impressive pieces were shown at the exhibition

Though in Tokyo there are no museums with permanent collections ranking with those of the likes of The Louvre, The Prado, The Met, The British Museum or Taipei’s Palace Museum, it is still one of the best, or maybe even THE best place in the world for special museum shows and exhibitions. During any given week, a glance at the museum listings will reveal several must-see exhibits at dozens of interesting venues, catering to almost any taste or inclination. The year 2014 was no different. With showings of ALL kinds of art Japanese and foreign, religious and secular, traditional and modern- everything in between, and more it was another busy year for the art-lover. 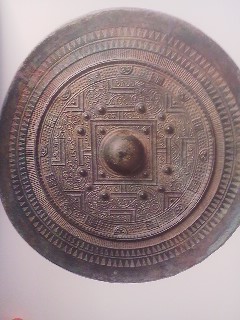 Bronze mirror (this is the back side) dated between the 4th and 5th centuries (National Treasure). At the exhibition there were 13 such pieces on display with at least 3 of them having been made in Tang China in the 3rd century. Bronze mirrors were items which carried with them considerable prestige in ancient Japan and are commonly found in tumuli. of the Kofun Period. Better illustrating how significant they were, a mirror －the YATA NO KAGAMI (said to be at the Ise Grand Shrine) is  one of the Three Imperial Regalia of Japan. Besides representing advanced technology and beautiful craftsmanship, mirrors themselves, which reflect things as they are, came to symbolize TRUTH and HONESTY and WISDOM

It wasn`t all a pretty picture, though. On the down side, I endured dangerous overcrowding at such highly publicized extravaganzas as the Hokusai show at the Ueno Royal Museum, the National Treasures exhibition at the National Museum in Ueno, and the Monet: An Eye For Landscapes exhibition at the National Museum of Western Art (also in Ueno),though the dangerously cramped and suffocating conditions vistors had to endure at these shows were more characteristic of Buddhist asceticisms than museum-going.

Still, with the beautiful and reasonably priced exhibition catalogues (which I almost always buy), I was able to savor and  study at my own pace the works I had just seen on the train-rides home.

The exhibition which I found most completely satisfying in this past year, though, is not one that many had heard of. It was held in early autumn at the tastefuly designed and excitingly located (with a view of the Imperial Palace: Idemitsu Museum of Arts (which is always worth a visit just for its amazing Pottery Shard Room.* 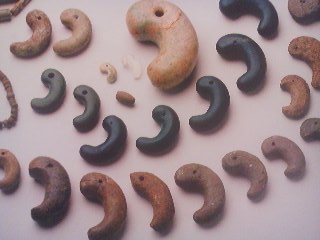 Magatama (National Treasures)- 4th to 5th centuries. Made of jadeite, jasper, chrystal and mica. Like bronze mirrors and swords these mysterious beads (no one is sure what their shape represents- embryos?) also carried with them great prestige. They are regularly found in tumuli of the Kofun Period and at other archaelogical sites dating back to the late Jomon Period (1,000 BC). MAGATAMA are mentioned in both the KOJIKI (712) and NIHON SHOKI (720) and more importantly a MAGATAMA, specifically the YASAKANI no MATAMA is one of the Three Imperial Regalia

Munakata Shrine (Munakata Taisha, 宗像大社), which surprisingly few Japanese have heard of (even fewer can read the characters used to write its name), is located in present-day Fukuoka Prefecture, on the northern part of the Island of Kyushu (at the point at which the main islands of Japan are closest to the Korean Peninsula).

The shrine as a whole is actually divided into three separate parts. The Main Hall ( agrand structure) which is located  on the mainland, near the sea, in what is now Munakata City (about 30 km from Fukuoka). There is another hall (the Nakatsu-Gu) on an island called Oshima, not very far from the mainland- about 12 kilometers. And most importantly for this exhibition, is the third part of the shrine, what is known as the Okitsu-Gu, on tiny Okinoshima Island, separated by 49km of sea from the shrine on the mainland- and only 145 km from Pusan on the southern tip of the Korean Peninsula.

Since the dawn of Japanese history- but especially between the 5th and 9th centuries) that part of Japan (northern Kyushu) played a major role (as a transport hub) in cultural exchanges, trade, diplomacy, and the movement of people between the Japanese Archipelago and the Asian Continent. The Three-Goddesses of Munakata (representing the three parts of the Shrine- and with names too long and difficult to remember), are mentioned in Japan`s earliest written records (the Kojiki, of 712 and the Nihon Shoki, of 720), were believed to be protectors of travellers, maritme transport, and trade.

It was the custom for those making the precarious voyage across the Genkai Sea to make offerings to the Goddesses- and from what could be seen at the exhibition, some made very fine offerings indeed- in the hope that the Goddesses would intervene favorably on their behalf and grant safe passage and successful missions. Many of these tens of thousands of offerings were simply left on Okinoshima Island fully exposed, though others were left under crags in the nooks and crannies of the island`s cliffs and rocks. 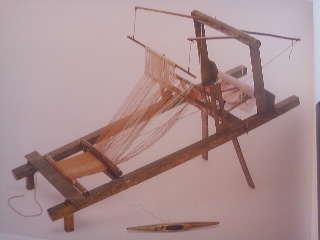 Miniature loom made of gilt-bronze (National Treasure) 8th-9th Century. Probably left on the island as an offering to beseech the deities of the shrine to intervene favorably on behalf of textile producers or merchants. Or perhaps it was just a prayer for a safe journey.

Taboos on trespassing the island have helped miraculously protect these treasures for more than 1,000 years (women are still forbidden to step on the island). Surveys carried out by scholars in the 20th century found 80 thousand ritual offerings- that`s right, 80 thousand, and ALL of them, yes ALL, have been designated National Treasures of Japan (though they are all listed together as ONE SINGLE National Treasure!). They are now house in the Treasure Hall of the Munakata Shrine in Munakata City. The only time I actually made my way to Munakata – a long journey from Tsukuba- the Treasure Hall was closed! That made the  Tokyo “roadshow” for these pieces, all the sweeter for me! 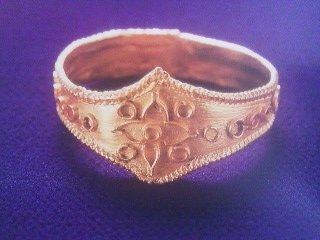 Gold ring produced in Korea  5th-6th century (National Treasure) I was interested to see how certain visitors seemed to pray before this ring. One man in his twenties seemed to be attempting to draw energy from the ring by srpeading out his arms and closing his eyes in front of its case.

As I stated earlier, I have selected this exhibiton as the best of 2014 because it was satisfying on so many levels. The Idemitsu Museum itself, so diginified, with pottery shard room*  and its fine view of the Imperial Palace (lounge chairs and free tea are provided to let you enjoy it) was not crowded at all when I was there in mid-October- so I was at my leisure to contemplate the mysteries of Japanese spirituality and the origins of the Japanese State.

But most importantly for my decision is that almost each and every one of the amazing treasures I saw that day remain with me- as if forever imprinted onto my minds eye. 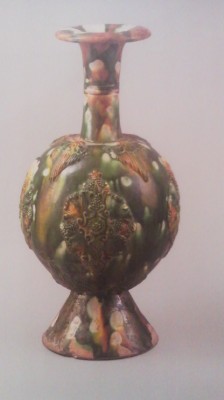 A 7th Century vase from Tang China (National Treasure)- though this was not found on Okinoshima, the fragments of vases exactly such as this one have been found on the island 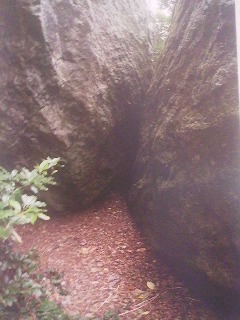 Between the 8th and 9th centuries precious fferings were left on the island in nooks and crannies like this important offering site. 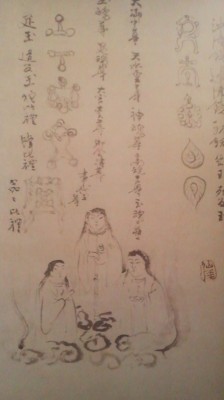 An Edo Period portrayal of the Three Goddesses of Munakata- by Sengai (1750-1837) – even after trade other exchanges between Japan and the Continent had stopped during the Period of National Seclusion, ICHIKISHIMAHIME, TAKITSUHIME and TAGORIHIME continued to be worshipped at the Munakata Taisha Shrine 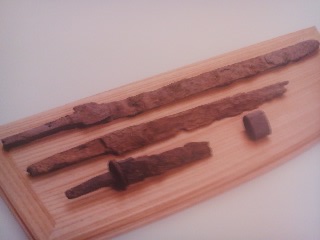 Swords, dagger (iron), and ornamental piece (silver-plated  iron) 6th century (National Treasures). Swords, along with mirrors and MAGATAMA beads were important status symbols in Japan. Swords were often placed in tumuli or given as offerings to shrines. Swords symbolized valor (and power) and a sword – the KUSANAGI no TSURUGI is one of the Three Imperial Regalia 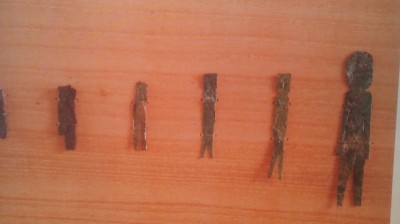 HITOGATA-  ritual objects shaped to represent the human form- gilt bronze and iron- 7th century (NAtional Treasures) While such figurines have been found at sites throughtout Japan they are almost always made of wood- these metal HITOGATA are extremely rare. Another mystery is their significance. Japanese HITOGATA made of paper (or later more sophisticated doll) where used to cleanse oneself of impurities (by rubbing)- but this involved casting the figurines into a river or the sea. Since these were not cast away, do they represent surrogates for human offerings as horse-figurines replaced actual horses as offerings? 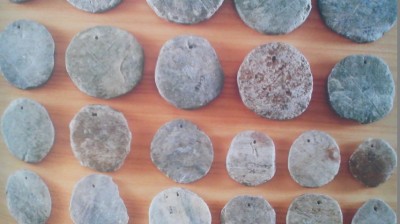 Mirror-shaped ritual objects made from talc. 8th-9th century (National Treasures) – for an age in hich the old bronze mirrors were no longer available 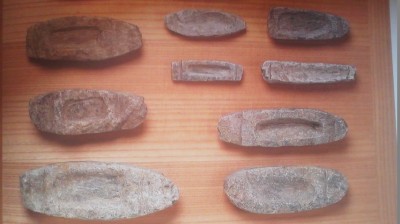 Boat-shaped offerings made from talc. 8th-9th century (National Treasures) These have been found in great abundance on Okinoshima. This should come as no surprise, as symbolic ships probably reoresent the most appropriate offerings for those setting out on a dangerous sea voyage 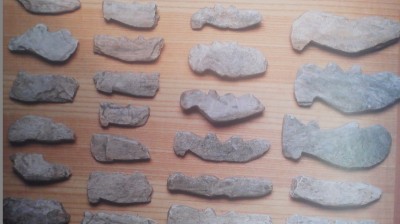 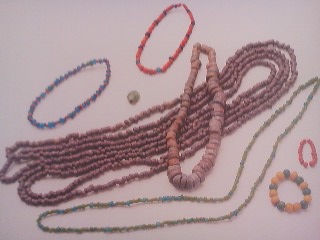 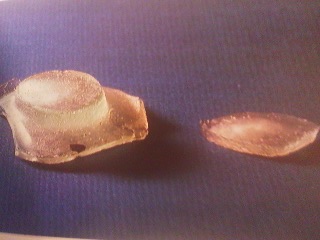 * The Shard Room at the Idemitsu Museum  has, as you would expect, pottery shards from all over the world kept in drawers through which the visitor can browse. Outside is a view of the Imperial Palace.