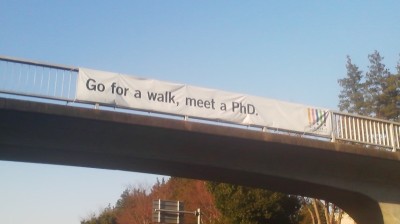 Go for a walk, meet a PhD – one of the many slogans thought up by the people at the Tsukuba City Office that you can see hanging from pedestrian bridges around the city. Today`s story about a chance encounter with zoologist Toru Oi shows that this one really DOES ring true ( as oppossed to some others like: Tsukuba- Hidden Ramen Mecca!)

According to the traditional Oriental Zodiac, this past year- 2014 –  has been the Year of the Horse. But those living in Japan who are interested in the country`s wildlife and follow the news on TV, might think of it more as The Year of the Bear ! This is because of the remarkably high number of stories about Japanese wild bears venturing into ‘CIVILIZATION’ – raiding crops and even homes and shops in search of food. Unfortunately for the bears, in most such incidents the hungry animals are shot (or if they are lucky, trapped and released). 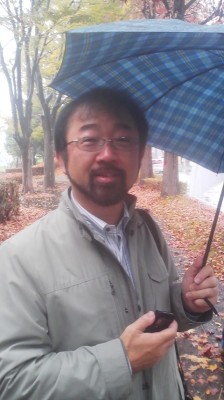 My chance encounter at a Tsukuba bus-station with Dr. Toru Oi, a zoologist and renowned bear-expert, gave me a chance to learn more about Japan`s bears and the bear problem of 2014

And while there are no bears in Tsukuba ( or in the rest of Ibaraki Prefecture, for that matter!) many of us DO like to head to the mountains for some walking and climbing- and bears can pose a serious  danger during a chance encounter.

One of my friends, Noguchi-san, had a real hair-raising story at Mt. Tanigawa in Gunma Prefecture, while on a hiking and painting trip with his wife.

Walking well ahead of his better-half (ungentlemanly, indeed!) he made it to the top of a ridge- which had been obscured from his view until he reached it. Huffing and puffing and eyes a litle out of focus with fatigue, the first thing he noticed was a large and hefty man dressed in black, leaning against a tree.

In accordance with trail ettiquette, Noguchi-san called out a hearty (though out of breath) Konnichi wa (Hello!) !

But what he thought was a man, turned around with a growl- a red gaping mouth, and angry yellow eyes . Twas a bear!

Noguchi-san froze – his brain must have frozen as well because (according to what he told me) his life didn`t even flash before his eyes. What  saved him was the approach of his wife- who was carrying a bear-bell. Startled by the noise, the bear turned and disappeared into the bush.

A close call – but all he ended up suffering was a good scolding from his wife.

After hearing this story I was naturally filled with a desire to learn more out about Japan`s bears and learn what to do during a bear-encounter.

And then, as happens so often in Tsukuba- there was a coincidence……

MEETING DR. OI AT THE  BUS-STOP

With Noguchi-san`s story – and numerous reports on TV of bear ‘incursions’ fresh on my mind, I got up in the morning and walked over to my local bus-stop. It was cold and drizzling- which meant that I wouldn`t be able to read while waiting for the bus to come.

When I arrived at the stop, there was already a small crowd there waiting. And among the chilled and sleepy faces was one that I recognized well (from TV)-  one of Japan`s foremost bear-experts Dr. Toru Oi !

Amazed by my good fortune (or was it fate?!), I asked if he could spare some time to talk about bears. He said sure.

And even more coincidentally- when I asked him where he was going- I had never seen him at the bus-stop before, he said he was on his way to the NHK Studios for a live TV interview about this year`s bear troubles!

A Japanese black bear (tsukinowguma)- from the Iwate Prefecture Homepage

On the bus we were able to talk. Here is what I learned:

There are 2 species of bear in Japan- a brown bear, the HIGUMA- which inhabits Hokkaido

and a smaller black bear – the TSUKINOWAGUMA- that lives in many areas of Honshu (especially in the Chubu and Tohoku Regions) and a small part of Shikoku (where only a few dozen bears remain), but has gone extinct on the island of Kyushu.

And though we were speaking in December, Dr. Oi told me that he had confirmed that 2 weeks earlier the bears in Hyogo Prefecture were still active. Most of Japan`s bears, however, had already retreated to their dens for hibernation.

The reason Hyogo`s 500-1,000 bears have been so slow in getting down to hibernating is that there are abundant chestnut and persimmon orchards which are not tended by farmers anymore- these trees have gone nearly wild – and this, along with a prefecture-wide ban on bear-hunting, creates a kind of paradise for the bears, who with all the goodies out there are in no rush to crawl into a cave and go to sleep.

I was surprised to hear that there were so few bears on the Island of Shikoku- where Dr. Oi said there were only a few dozen remaining in the wild. I was suprised because I know that there is a high percentage of forest on that island. In fact, Kochi Prefecture is almost 90%  forest-covered. The problem is though, according to Oi Sensei, that those forests are made up almost completely of cedar and cypress trees. Completely uselss for bears which rely on such trees as beech, chestnut and dogwood.

I also assumed that bears would  inhabit some of Shikoku`s remote valleys- or the pristine Shimantogawa River basin. Oi Sensei told me that in Japan bears inhabit ecosystems only 1,000 meters above sea level.

Another problem for the Shikoku bears in the competition from deer who eat the foods on the forest floor.

A strong image in my mind of bear-food is salmon. Unfortunately for Japan`s bear`s, however, dams and fishing have made that an impossibilty for all of them except those that live on the remote Shiretoko Peninsula on Hokkaido.

All others have to make do with what they can find in the forest- though some bears do attack and eat fawns or baby serow (an indigenous antelope), or scavenge the corpses of dead animals.

According to Dr. Oi, even without salmon, in most years, the forests produce enough foodstuffs to sustain Japan`s bear populations. The key-word here though is MOST YEARS.

That is why the bears have been approaching areas of human settlement- they don`t have enough food.

There were also bad years in 2004, 2006 and 2010, but this year has probably been the worst- especially in Gifu and Nagano Prefectures.

More than 2,000 bears were killed in 2014 for the sin of coming out of the woods. Dr. Oi now spends a lot of his time examining their corpses to gather data on their age (with can be determined by their teeth which get fresh layers every year), sex, stomach content etc.

Interestingly, while in most years males are more frequently killed, in food-poor years it is the females, desperate to build up body wait for breeding, who are shot more often. 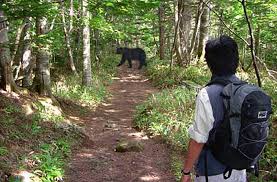 BEAR ENCOUNTERS AND WHAT TO DO

With bears, the most dangerous thing to do is surprise them- like my friend Noguchi-san did. That is why is important that you let any bear that might be in the area know that you are coming.

The traditional way of doing so in Japan has been to carry a bear-bell. Dr. Oi says that indeed this method is effective- but unneccessary and highly annoying (with that continuous racket throughout the duration of your hike!)

It is just as effective, he says, to clap yor hands togther loudly (as if worshipping at a Shinto Shrine) or shouting out whenever rounding a bend or coming to the top of a ridge- anywhere that you will be entering but cannot see.

The Tohoku Area with its abundant bears and its legions of wild-vegetable hunters is where most chance bear-encounters take place.

If you do run into a bear- or even see one from afar – the important thing to remember is DO NOT RUN. If you do, you will be caught. You can`t outrun or outclimb them.

With your eye on the bear, begin your retreat- very slowly and (if you can muster it ) calmly.

Make sure to open up an escpae route for the bear if there was none when you ran into it.

And that is about all he could advise ! Beyond that you are on your own! 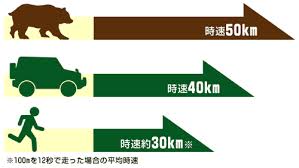 Who goes fastest? – You guessed it!

He told me that there are now very few traditional hunters, but that now they are equipped with state of the art rifles- which makes their job much easier. They still follow tradition, though. After making a kill they bring the bear to their village where it is butchered – for its meat, fur, and its prized gall-bladder, which is used as a medicine. Bear fat is also said to possess medicinal powers.

He said that bear gall-bladder really does probably have have an effect on painful gall-stones and on improving digestion. But with all the other drugs and treatments available today fo the same ailments- we do not need to kill bears for that purpose. 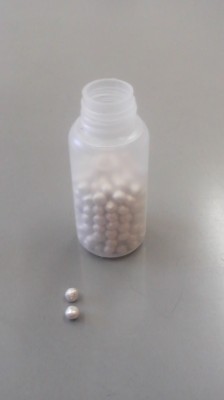 My friend Yatsu-san always carries with her this bottle of very expensive traditional medicine made of bear gall-bladder (among other exotic ingredients). The shop that she gets this from is centuries old and located in Odawara, Kanagawa Prefecture. It is said that the great Mito Komon (Ibaraki PRefecture`s most famous historical personage) carried this medicine in his well-known INRO (medicine-flask)

And just before we had to get off the bus and go our separate ways, I asked Dr. Oi about how he came to study bears.

He told me that it all started while visiting his friend who was a student at Hokkaido University. He accompanied the friend and his lab-mates on a bear survey in central Hokkaido.

While they did not encounter any live bears at the time that did find and record plenty of scat, footprints and feeding remains to peak his interest in the large mammals.

And years later- his most impressive experiences  studying bears were while working for the Ministry of Agricultures Research Institute in Morioka, Iwate Prefecture. There he and his colleagues were trapping bears to determine the feasablity of trapping and relocating – instead of shooting, as a way of dealing with intruding bears.

Though time consuming, labor intensive, and expensive- an efficient system of trapping and relocating might be the only way to save Japan`s bears from extinction.

What struck him most deeply doing this work was how each bear had its own personality- some trapped bears raged aggressively, some remained stoically calm, while others quivered in fear……..

Just another day in Tsukuba. 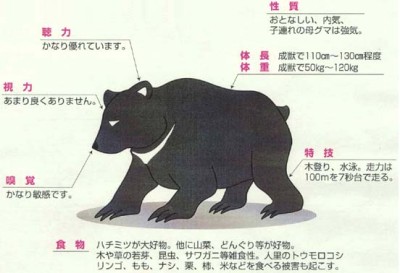 From the Tono City Homepage- bear fact: sensitive hearing,poor eye-sight, strong sense of smell, gentle in character- though mothers with cubs can be aggressive. From 110-130 cm in length and 50-120 kg in weight, they can run the 100 meter dash in about 7 seconds. Diet- honey and acorns are favorites. Wild vegetables, the sprouts of trees and grasses, insects, river crabs- they also steal corn, apples, peaches, pears, chestnuts, persimmons and rice from farmers.

And oh- my talk with Dr. Oi was very brief and too much was left unasked and unsaid. What important question I forgot to pose was about the total current bear population. I did a google search just now and learned that there are an estimated 10.000 wild bears in Japan with the possibility of there being many, many more.