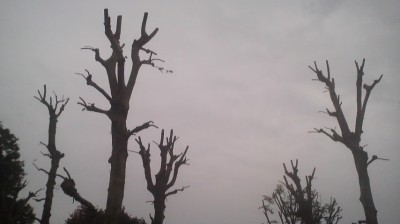 Japan is extremely fertile ground for the collection of good ghost stories- and not only those gleaned from anthologies of ancient folktales or encountered while  attending the classical Noh Theater ( for what, if anything, are Noh plays, if not ghost stories?) Even more intriguing, are those you hear from friends or acquaintances about their own personal encounters. And if you`ve stayed in this country long enough, your bound to have had your own hair-raising experiences of the unexpalinable –  I certainly have had some – even with this shiny bald pate of mine !

Over the past few years , on each Halloween, I have selected what I deemed to be the most haunting story of the year –  something which I either heard from a reliable friend or which I had experienced myself.

For tonight, I had been planning on describing a strange experience I had the other day in Nakano, one of Tsukuba`s old neighborhoods. I had arrived at an old meeting hall where I was going to have a party with some mothers and their little kids. I was about 30 minutes early, and the only one there when I arrived was an older woman who was doing some cleaning. As she vacuumed, I surveyed the old room- and noticed some KAKEJIKU – hanging scrolls, laying rolled up at the bottom of the alcove.

Having a keen interest in traditional Japanese culture ( as readers of this blog know), I asked the woman if I could have a look at the scrolls. She said “sure,” and proceeded to  unroll them one by one- there were three of them –  and she told to hang them from the hooks in the wall over the alcove- which she could`t reach herself.

The paintings on the scrolls were interesting-  two of FUDO MYOO, with his fierce visage meant to terrify evil doers into changing their ways- and two of the great priest Kukai (Kobo Daishi) who introduced esoteric Buddhism to Japan from China.

These hanging scrolls are used every month by the neighborhood woman for prayer meetings- which have been held continuously for generations. 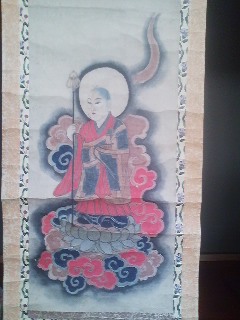 After I had unfurled some old Buddhist hanging scrolls – and them put them away- a group of small children fell into an almost trance-like state and began chanting some incomprehensible mantra ( though they did not see the scrolls with their own eyes!

I took some pictures of the scrolls, and then took them donw off the walls, rolled them up and the woman then put them away, in a closet, and out of sight.

Soon the others arrived.  About eight pairs of mother and child. The kids ranged for 3 to 6 years of age, and I knew them all well. We sat down and  and started exchanging greetings and small talk.

Five minutes had not passed, when I noticed that all the kids had pulled back away from us adults- and had formed a single row facing the alcove. They were all sitting Japanese-style, kneeling with their legs folded back under them.

They had their palms together as in prayer and began loudly chanting some incomprehensible syllables. 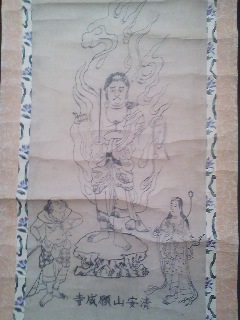 At first we adults were amused by the scene. But after about 30 seconds, myself along with the others started to urge them to cut it out. But they didn`t ! They appeared to be in an almost trance-like state! The mothers all but freaked out – we had to rush over and pull at the the kids to get them to snap them out of it!

We resumed our party- but after about five minutes THEY WERE AT IT AGAIN !

Those little kids with no experience of Buddhist chanting ( I confirmed that with their moms)- and who I had known nearly all their lives and met with dozens and dozens of times without ever having seen them do what they did on that dayー just after I had been looking at the old Buddhist scrolls ! 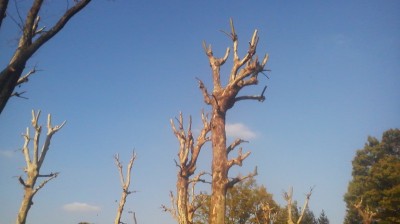 When I contact the people at the city office resposible for ordering the trimming they explained: ” We wanted to let more light in . “ 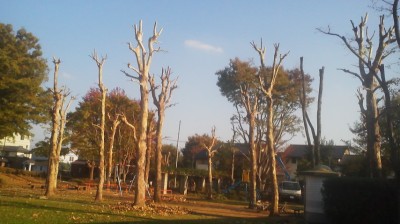 They sure did the job!

Anyway, that is the story I thought that I would want to write about tonight- Halloween night – but earlier today I encountered something which gave me even bigger goose-bumps !

Walking down the road which goes by my house I came to our local park- which is normally filled with grand poplar trees. These provide shade in summer and turn dazzling color in late autumn – and are somehow comforting to me all year round.

What I saw today, though, stopped me dead in my tracks and made my jaw drop slack- the luxuriant trees had been all clipped short- and looked like knarled and stubby arthritic hands !

While certainly unintentional- the city office, with its ever vigiliant anti-tree policy had created the perfect halloween-scape

I hope I don`t have nightmares. 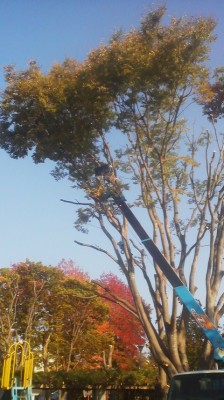 Still grand- this tree at my local park will soon be turned into a leafless, branchless stump – it was horrifying to watch! 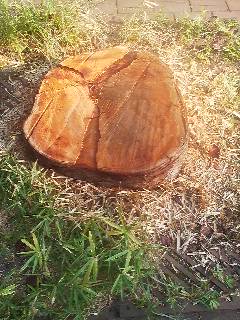 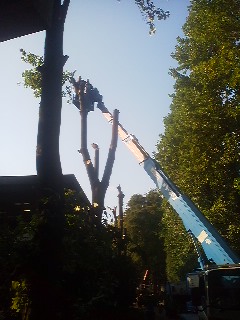 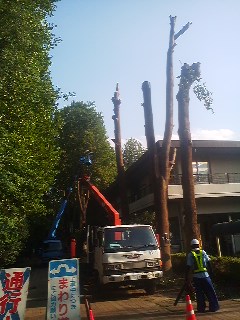 These trees would eventually be COMPLETELY REMOVED leaving only lonrly stumps. When I asked one gentleman (probably in his late 60`s) how many more trees they would be cutting down, I thought he was sharing the same concerns as I was feeling. Instead, he said (to my surprise and consternation): ”I hope they cut them all down ! They`re dangerous ! ”