Join the Crowds – Get Baked Sweet-Potatoes and Other Sweet Potato Products at KAITSUKA (かいつか)- you`ll have to wait in a long line (for the time being, at least) 27 November, 2014 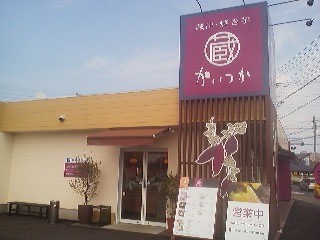 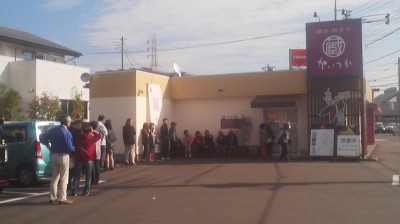 The door-bell rang. I hesitated. Should I pretend not to be in? I mean I wasn`t expecting anybody. It could have been bill collectors or even worse…… missionaries. I`m not sure why I did it, but though it was the middle of the day and I was not expected to be in, I somehow felt compelled to get up and answe the did.

I was certainly glad I did. It was my friend Mamoru Shimizu ( a gentleman and a scholar), someone I am always glad to see- and someone who has taught me so much about Japan. On that day, however, he did not have much time to chat. He had just come back from a drive to Kasumigaura City- about 45 minutes each way.

He said he had gone out there to buy baked sweet potatoes- which seemed like quite a SHLEP for something that you could get at any supermarket, but he had thoughtfully bought a box of the spuds for me.

As soon as he was gone from my door-step, I tore open the box . The YAKI-IMO (baked sweet potatoes) were smaller than what you usually find- and they felt quite soft. I cracked one in half and took a bite- as soft as butter, sweet as honey, and deeply flavorful.

Now I understood why he had  made the long drive. 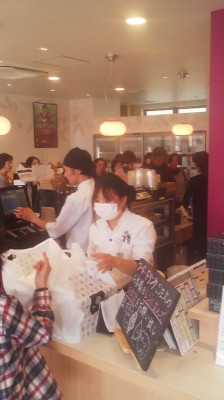 After I had told Mamoru-San How much I had enjoyed his gift, he brought me another box after another one of his sweet potato runs to the shores of Lake Kasumigaura.

After that I heard other people talking of the same shop, of people making the drive out there- or ordering home-delivery by phone or internet. 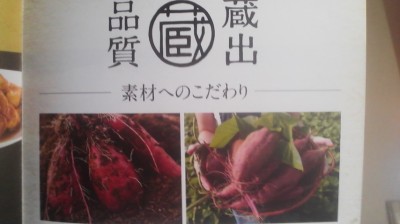 KAITSUKA`s sweet potatoes are of two varieties- BENI AZUMA and BENI TENSHI. They claim that their GOOD TASTE secret lies in their strict selection of only high quality spuds and their special ageing process which takes place in their KURA (storehouse)

Then a rumor spread. The sweet-potato shop, called KAITSUKA, was COMING TO TSUKUBA! They would be occuppying a building left behind by a conveninece store which had gone under (one which had been robbed by a knife-wielding youth a year or so earlier).

When I so the workers putting up the the big purple sign reading KURA DASHI YAKI IMO KAITSUKA (meaning: Bake Sweet Potatoes- Straight From Our Storehouses) I realized that what they were saying was true! 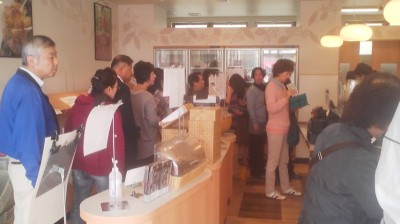 Kaitsuka jam-packed from early in the morning

Anticipation grew as the word spread- and when the shop opened this past summer business was brisk right from the start. Selling their delicious baked sweet-potaotes would probably have been enough, but the people from KAITSUKA had bigger plans, offering a whole slew of sweet potato products (including raw potatoes, sweet-potato ice-cream, sweet-potato sweets, dried sweet potatoes and DAIGAKU IMO- fried and glazed with sugar!)

They also serve and array of hot and cold beverages (see below). 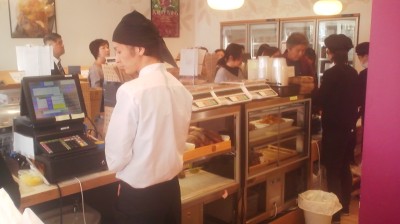 KAITSUKA, first thing in the morning

Yes, things were going well right from the start- but then things really took off ! It was being featured on a nationally televised food program that did it. Now the traffic is practically dead along the road which runs by it. Security guards had to be hired to help out with the parking. Long lines can be seen forming outside its door long before opening time. By mid-morning they sell out and closed their doors until additional stock arrives by truck from Kasumigaura.

The power of television. 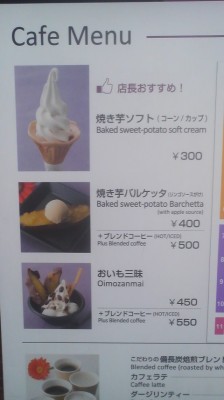 Part of the menu

One early morning last week I spoke to some of the people waiting in line for KAITSUKA to open its doors. Interestingly, several people there had been asked by friends who had seen the program on tv to send them some of KAITSUKA`s spuds. Apparently after seeing them on the tube- they just had to have some. Potatoes for couch potatoes! 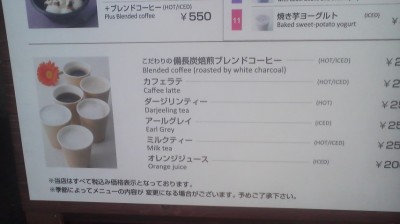 If you don`t fancy getting into a long morning line, you might want to wait until evening to try out a KAITSUKA sweet potato- or  ice cream.

The shop is located in MATSUNOKI, Tsukuba- between Ninomiya and Matsushiro. If you are coming from Tsukuba Center take Nishi Odori to Doho Park and turn right at Andersen Bakery Intersection. Go straight till you reach the second traffic light. KAITSUKA is right there on the right. 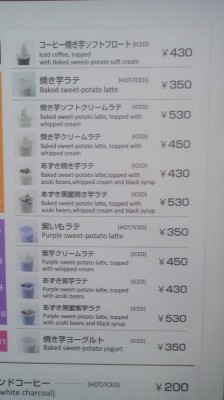 While I was in the shop the other day, I heard one woman commenting (in a loud voice)- “you see that, you can even make a company out of spuds!”

And KAITSUKA certainly has done that- in fact I would n`t be surprised if after having conquered Tsukuba they went to take on Ginza and Shibuya- then New York and Paris!

Enjoy your YAKI IMO ! For more on its history and role in Japanese culture, read my previous article. 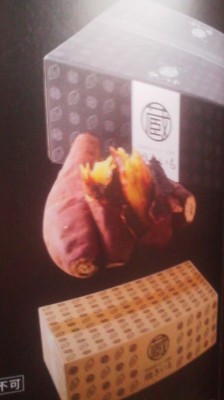