On the Japanese Language: SHINPAI TEISHI (心肺停止) which means Cardio-pulmonary Arrest, is Used by the Media Instead of the Word for Dead- SHIBO- (死亡)- Before Lifeless Bodies Have Been Examined By a Qualified MD 6 October, 2014 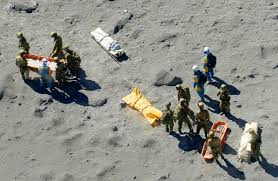 The Japanese language media reported that rescue crews working on Mt. Ontake discovered those who were unharmed, those who were injured, and those in a state of cardio-pulmonary arrest (SHINPAI TEISHI)- just what is meant by the last term? Photo from the Japan Times website

Little time passes between natural disasters here in Japan. In recent months the intervals have seemed especially short. That`s the way it is when you sit upon  extremely active seismic faults right in the middle of a busy typhoon lane, have 10 percent of the worlds active volcanoes within your borders, and get large amounts of seasonal rain pounding your steep mountain slopes.

In August, heavy rains brought about landslides in Hiroshima which swept whole neighborhoods away. Then in September, the eruption of Mt. Ontake surprised hikers, overwhelming them with steam, gas and flying rocks, leaving, as of today, 50 dead- with more than ten still missing.

Now we are in October.  As I sit here, a devastating typhoon is working its way across the country wreaking havoc.  School and work have already been cancelled here in Tsukuba ( giving me some free time to write  this post), but there is still  hope that the storm might die down before it reaches- or veer off into the sea.

Imagine what it was like in past ages, when what used to be the most commonplace  form of natural disaster in Japan- FLOODING – would strike with frequent regularity- before all the dams, flood-gates, levees and concrete-lined river banks were put in (though I still complain about what these construction projects have done to the natural environment- while I understand why most Japanese don`t !)

Those of you who follow the news on Japanese TV were probably puzzled  by a word used by all the Japanese media when reporting on the attempt to rescue climbers in the wake of the September 27th eruption of Mt. Ontake in Gifu Prefecture.

As scenes of what appeared to be corpses (since they were completely covered) could be scene being carried off the slopes of the volcano, newscasters reported that these victims were in a state of SHINPAI TEISHI ( literally- hearts and lungs stopped), which suggested that they might be in some form of reversible cardiac arrest.

Meanwhile, if you were watching, or following the story in English, these same victims were described as being.

Why did the Japanese language media use the term SHIMPAI TEISHI when rescue workers had obviously treated the victims as corpses.

This is an interesting question even for native speakers of Japanese, some of whom mistakenly believe that its use indicates that the victm`s brains were still active while the hearts had stopped.

The truth is that SHIMPAI TEISHI indicates a complete lack of vital signs- in other words: death. the only reason that this special expression is used is this lack of pulse, heart-beat, respiration, or response to light  in the pupils was remarked not by a licensed MD, but by a paramedic, fireman, or other rescue worker.

In other words, according to guidelines laid down by the government, the Japanese media cannot use the word SHIBOH (死亡)- dead – without an offical declaration of death made by a person with the proper qualification.

And though it is a bit complicated, it emphasizes the important place the use of words has always had in Japanese culture in which there is the concept of KOTODAMA (言霊)- the spirit of words- indicating that words are not mere sounds or letters but have a power in themselves.

This belief in the proper use of words, and a deep respect for life and death ( when it comes to its own people, in particular), along with what seems like the continual desire to be a bit different from everyone else in the world, are the reasons that the Japanese government called reported that the corpses being carried off the volcano were “in a state of cardio-pulmonary arrest”, while the rest of the world simply reprted that they were dead.