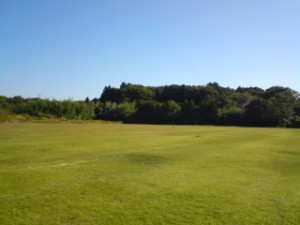 Beyond the turf grass field, under a dense woods, sits the ruins of Konda Castle – one of the 50 or so Satelite fortresses which formed the outer defenses of the once great (and soon to be reconstructed) Oda Castle from the 12th through the16th centuries. To the left you can see a dense bamboo forest.

The hill upon which Konda Castle (it was actually a wooden fort first built in the Kamakura Period 1185-1333) once stood and the moats which still surround it have been reclaimed by nature. While exploring its woods and bamboo forest, it is easy to forget that you are a few hundred meters from a busy road and the Sakura Junior High School (and my former house as well). It is a dark, silent and mysterious place, and every time I venture there, I find something new. 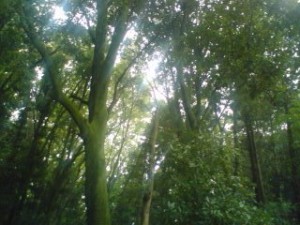 The forest canopy as seen from the old moat

Last weekend I approached the castle hill from the turf-lawn field on its east side and veered towards the large bamboo grove on the left. I found an opening, leading to a trail kept clear by small mammals and mushroom hunters. Soon, however, any sense of a path was lost as old, dried out bamboo created blocked the way. These could be easily negotiated, however, by stepping over, going around, or just snapping them  underfoot. When I stood still, not a sound could be heard, except for the light clattering of the bamboo in the breeze. As I walked on further toward the edge of the grove, I noticed some golf balls. This was not surprising as the turf-grass field is often used by my neighbors for driving practice (it is common to find golf balls in bamboo groves around Ibaraki for this reason). The balls grew more and more numerous as I went on. 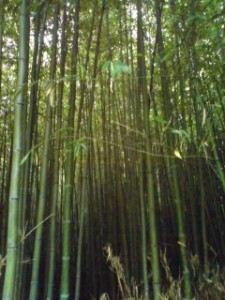 Then I noticed something. It looked like a golf ball, but slightly bigger. I thought — AN EGG! I crouched down to get a closer look. It sure did look like an egg, though almost perfectly round. I touched it. It felt like a hard boiled egg which had been peeled. I lifted it. This was no egg, it was a mushroom, connected to the soil by a thin white chord. How amazing! A round white mushroom, among all the golf balls. I searched for more, and found a few, but only among the golf balls. 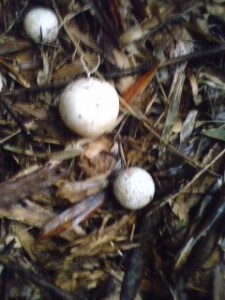 My mind was racing! Had I found a species of mushroom which had evolved to take on the shape of the golf balls as camouflage? Fantasies of an article in Nature Magazine were spinning in my head. Then I saw a startling sight which brought me back to reality and gave me my first glimpse of something I had only seen before in books — a Phallus Impudicus (a well-known stinkhorn mushroom) which was standing erect, having burst out of one of the eggs. 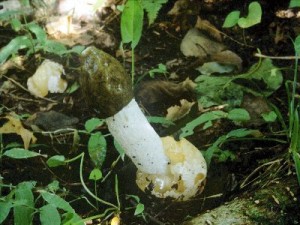 No. Suppon Take or phallus impudicus

These mushrooms are called suppon take (which literally means snapping turtle mushrooms) in Japanese, because they resemble the neck and head of that creature. They are found not only in the Konda Woods, but also pop up in other locales in Japan, North-East Asia, Europe and North America. When the phallic mushrooms burst out of the egg (sometimes ten inches in a day!) the head becomes covered with a stinky slime which attracts flies and other insects. These critters then help to spread the mushroom’s spores. Before this happens, the egg itself has no foul smell and is actually eaten, not only in China where it is believed to be good for rheumatism (and as an aphrodisiac of course), but also in France and Germany.

These amazing fungi, extended to full length, can be seen through November in Konda-jo’s bamboo forest.

For more on PHALLUS IMPUDICUS and other stinkhorns see: