See the Kurosawa Masterpiece RASHOMON (羅生門) on the Big Screen at Cineplex Tsukuba ( everyday at 10 am, thru Friday the 26th) 22 September, 2014

One of the greatest films of all-time: Akira Kurosawa`s RASHOMON (1950), with Toshiro Mifune and Machiko Kyo will be playing as a matinee this week at Cineplex Tsukuba

Every once in a while someone asks me what my favorite movie is. For years now, I`ve always had a set answer- RASHOMON. Besides being brilliantly made in all its aspects: cinematography,sets, lighting, acting, soundtrack and mis-en-scene- the story itself, a composite of and elaboration on two separate (very) short stories by Japanese novelist Ryunosuke Akutagagwa, is moving, disturbing and most importantly: thought-provoking.

The story revolves around a crime- rape and murder. Though even more terrifying than these acts are the testimonies of those involved regarding what they had experienced- each one completely different- including the one given by the dead man through a medium (not even the dead can be objective in this film!) 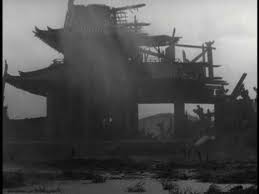 One of the sets from the film showing the old Rashomon Gate in Kyoto, half destroyed in the pouring rain. A perfectly simple way of representing what the whole of Japan looked like after WWII had just ended

For me, RASHOMON is the greatest example of a work of art capturing the mood of a certain place at a certain time. Though the film is set in medieval Kyoto, the time and place I am talking about is Japan at the end of the Second World War. The country completely destroyed, the people exhausted and in despair- everything their teachers and government had been telling them for years had now turned out to have been a lie!

Always the ham, but a truly charismatic one, Toshiro Mifune plays the bandit Tajomaru who murders a samurai and rapes, the man`s wife. In the film the story is told from the perspective of EACH of the different characters involved- including the dead man`s. Th story line captures to the T, what the mood was like in post-war Japan when sitting among the ruins, with all they had been taught to be true suddenly discredited, the people were asking themselves: What happened? and What is truth?

Kurosawa catches the mood perfectly- right in the very first scene of the film. The ravaged Rashomon Gate in a rain so heavy, those who have never been to Japan during June`s rainy season would think that Kurosawa had overdone it.

A wood-cutter and a Buddhist priest take shelter from the storm under the gate. They sit there despondant: “Sappari Wakaranai”- “I just dont understand it at all,” says the priest.

Then he goes on to tell a story which for him is the most horrible one he could ever imagine- a story which shows that there is no clear truth!

He tells the wood-cutter about the trial of the bandit and the testimonies of the witnesses involved.

I imagine that that is exactly what the Japanese people were thinking at the time the film was made- What happened? And- What exactly IS the truth?

Then despite, the “horrifying” proposition that the film raises – that everyone has their OWN truth and that human egosim makes objectivity impossible- the film ends up giving a positive message. Live on! Raise the next generation! Maybe mankind will have a better understanding of things in the future.  This attitude is depicted by the actions of the wood-cutter who takes an abandoned baby, and with a look of postive determination on his face, declares that he will raise it along with his own (six) kids.

This attitiude of enthusiastically getting on with life is exactly the one that post-war Japanese adopted- and that`s why this film always strikes me as a great work of art that has captured the spirit of a generation.

And when I say always, I mean many, many times: I own a copy of the film (first on video and then on DVD) and have watched it repeatedly.

Still, I have never seen my favorite film on the big Screen 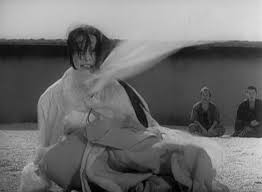 This is in my opinion, one of the spookiest scenes in all of film history- the murdered Samurai tells his version of the story through a medium

Well, now is my chance ( and yours, too!) Cineplex Tsukuba, as part of its polivy of showing classic films everyday at 10 am, will be screening matinees of RASHOMON everyday this week thru Friday (tickets 1,000 Yen, 500 Yen for students) 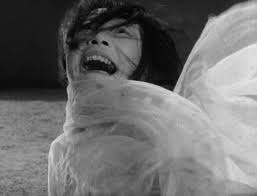 The medium, played by Noriko Honma, will give you goos-bumps!

There are no sub-titles, and that might put you off if you are not a Japanese speaker, but with a little preparation(reading online synopses or the entire scenario) you find it very worthwhile find to see one of the greatest films of all-time projected onto a large screen- instead of watching it on your tv or computer screen. 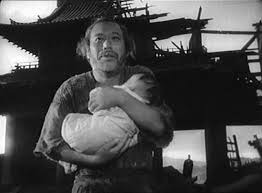 A beautiful ending! ‘(Sorry for the spoiler!) Instead of despairing or resorting to destructive or selfish behavior, after all he has heard and seenm the wood-cutter (played by Takeshi Shimura) decides to take this orphaned child back home and raise it along with his six other children!

Cineplex is located on the Noda Sen Road between Nishi and Higashi Odori. If you cycle to the end of Akatsuka Park you will come to it.

If you can`t make it this week, you can always rent the DVD or just watch it for free online! But it won`t be the same as taking your snacks and drink into the theater, getting comfortable in your luxuriously comfortable seat- and losing yourself in the story told in lights projected on the big screen- lights created and arranged by a master! 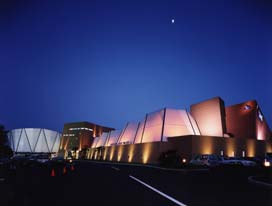 Sitting on the site of an old miltary air-field, Cineplex Tsukuba, has a bowling alley, batting range, rock climbing course, and bath-house, in addition to its multi-plex movie theater