Giant Salamander (オオサンショウウオ) Discovered and Rescued In Ushiku City (near Tsukuba) Has Found a Safe Haven at the Kasumigaura Aquarium 7 September, 2014 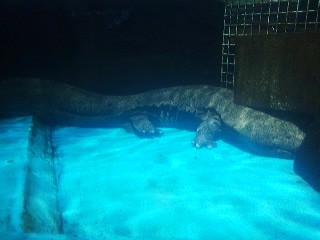 Rescued from the roadside in Ishiku this past May (2014), this endangered giant salamander- Andrias japonicus- (1.2 meters long weighing 20kg) has found a comfortable home at the Kasmigaura Aquarium in Ayumizaki, Kasumigaura City. Just how this protected species ended up walking around Ushiku City remains a mystery since O-SANSHO-UO, as these amazing creatures are called in Japanese, do not live in the wild anywhere in Ibaraki Prefecture.

You never can know what is going to happen. Certainly the Ushiku City resident who has only been identified as a male in his 50`s could not have imagined what he would find on his morning walk one fine spring day- May 10, 2014 to be exact.

Right there beside a road used for agricultural vehicles, just by a rice field, was a creature the man had only seen in textbooks and on TV- a Giant Salamander (O-SANSHO-UO in Japanese) – more than one meter long – and easily recognizeable by its large head, bumpy skin, and disproportionately small,baby-like feet. 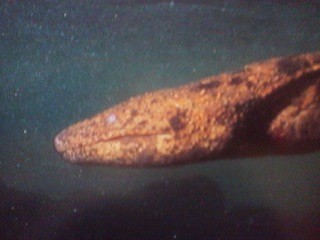 The largest amphibians in the world (along with the Giant salamanders of Szechuan, China and the giant salamanders of the Mississipi, these living fossils (they survived the ice age only in the two area mentioned above and in Japan) spend the daylight hours hiding in underwater nooks and crannies. At night they move into suitable hunting grounds where they wait absolutely still in order to ambush small fish, frogs, crabs, eels, insects and worms with their enormous mouths. They might even occassionally prey on the unfortunate mouse, snake or frog who happens to fall into the water.

Realizing that this very rare and strictly protected creature was in big trouble struggling along the road ( the giant salamnders usually spent their entire lives in the water- pure mountain water!), he thought about capturing it on his own, When he made an attempt to approach it stealthily from behind, however, it quickly turned its head back and took up an aggressive posture ( when frightened in the water they let lose a milky foul smelling substance- which is why the Japanese use the name Large Pepper Fish- 大山椒魚- for it), the man realized that he would be needing some help, and ran off to get reinforcments. 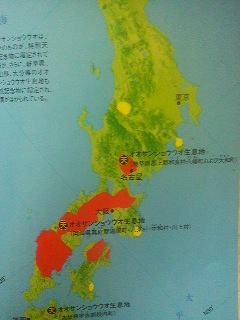 The orange areas on this map of Honshu and Shikoku indicate the current natural range of the Japanese giant salamander- all far from Ushiku!

Returning to the scene with some friends, they were able to get the giant salamander onto a plastic tarp and carry it to the city office.

Just how the O-SANSHO-UO got to the spot where it was found remains a mystery. They do not live in the wild anywhere in Ibaraki Prefecture- what remains of their population mostly remains in the mountains of western Honshu- especially Shimane, Mie amd Okayama Prefectures(giant salamanders are the deity enshrined at the HANZAKI SHRINE in Yubara, Okayama).

Though it is illegal to do so- Japanese giant salamanders were designated as TOKUBETSU TENNEN KINENBUTSU (a Special Natural Monument) in 1952, someone must have kept  the large amphibian as a pet- and released it into the wild for some reason, perhaps because it had grown too large to take care of!

Of course another possibility is that it was able to escape on its own- but that seems far less likely, given its poor mobility on land. 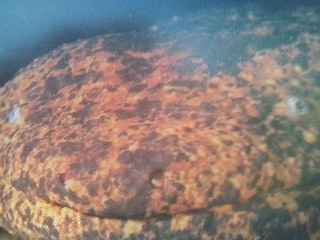 Japanese giant salamanders have very poor eye-sight, but their skin has special sensitivities which help it locate prey, etc. These amphibians can grow to be up to 1.5 meters long and sometimes live well over 50 years.

The story made the news back in May, and it stuck in my mind. Of all Japan`s fauna, it is the giant salamander for which I have the greatest affection for- and not only because it is extremely funny looking- like me ! There was an experience I had long ago while visiting the Amphibian Research Institute in Tochigi Prefecture ( not open to the public) that left a great impression on me. One of the staff there lifted an O-SANSHO-UO out of a tank and put it into my arms. I have not forgotten the surprise- or the slimy sensation- since.

It pains me to know that year by year, the damming up of Japan`s rivers and the lining of their banks with concrete have left these amazing amphibians with fewer and fewer places to live (though now they are not usually eaten by the mountain folk, as they were in past ages, as an important source of protein!) 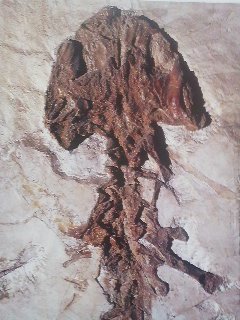 This 10,000,000 year old giant salamder fossil discovered in Europe (where it is now extinct) shows how Japan`s O-SANSHO-UO has remained veritably unchanged since that time- a true living fossil !

Anyway, a few months after the giant salamander was rescued in Ushiku, in early September, I had the morning off and decided to head out to one of my favorite areas near Tsukuba- DEJIMA- the peninsula that juts out into Lake Kasumigaura that can be reached by driving past Tsuchiura.

Surrounded on three sides by water, the area has been settled since ancient times and there are important archaeological sites dating from the Jomon and Kofun Periods ( the fact that the intermediate Yayoi Period is left out is evidence of how the Yamato People suddenly burst into the area and settled extensively using the lake as an important transportation hub). 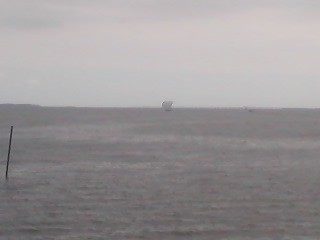 It was a perfect day for an outing. First I dropped by at the 3,000 year old shell mound site (FUJIMI KAIZUKA) and the nearby tumuli (kofun) constructed to inter the remains of local Yamato chieftains. I then went to the local histiry museum and watched a film about the history of HOBIKI SEN, the distinctive sail boats which were important for the fishing economy for about one hundred year ( betweeen the 1880s and the 1980s) and which are now quaint seasonal tourist attractions. 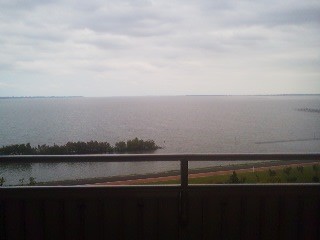 The view of the lake from Ayumisaki

The woman at the museum ticket office asked if I wanted a combination ticket, which would give me a discount if I wanted to visit both the museum and the little aquarium by the lake. I said yes, and after spending about an hour at the museum, I headed down the slope upon which it sits toward the lake, stopping off at an interesting temple ( with a great lake-view and interesting stone monuments) on the way.

The Kasumigaura Aquarium is located in Ayumisaki at the eastern tip of DEJIMA the peninsula that juts out into the middle of Lake Kasumigaura. Just turn to the right before you reach the big bridge over the lake.

Entering the aquarium (and passing the poor big old tortoise trying to paw its way out of a plastic tub at the front gate) I saw right in front of me, on the back wall to the right, a giant salamander. Rushing up to the glass, I stood and watch it for a while, taking note of its tiny feet with 4 toes on its front paws and five on its back ! Memories of long ago holding one in my arms flooded back to me. Stepping back a bit for a different perspective, I noticed a xeroxed copy of a newspaper article  posted above the glass. This was the O-SANSHO-UO found in Ushiku.  I was relieved to find him* (or her- they don`t know which yet!) doing so well. Their is even a friend- another giant salamander in  the same tank (though in a separate section).

The little aquarium had lots of other freshwater creatures (and some sea creatures as well!) in small and well-maintained tanks. They also have an interesting spider section! – a good place to take the kids.

I had to get back to Tsukuba in the afternoon, and that cut my aquarium visit short, but I definitely want to drop by again, on a weekend, to watch the giant salamnder being fed !

I left the excited and and filled with reassurance that giant slamanders were still my favorite among Japan`s native fauna! 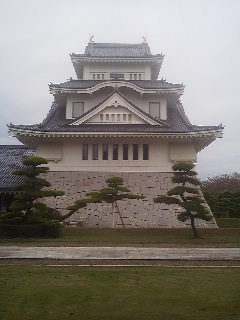 The history museum at Ayumisaki is located on the plateau above the aquarium. Its rooftop observatory provides excellent views of the lake. 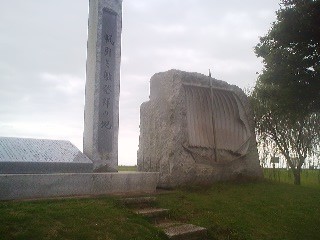 Outside the Kasumigaura Aquarium is a monument to the HOBIKISEN fishing boats, invented by local resident Ryohei Orimoto. These slender craft with large sails made it possible for individual families to earn a better living. At the peak of their popularity, about 900 such vessels could be seen out on the lake at one time.

* One very interesting fact about giant salamanders is that they are one of very few species in which males protect the eggs and rear the young.