Evacuees from Fukushima- One More Segment of Tsukuba`s of Surprisingly Diverse Population 29 September, 2014 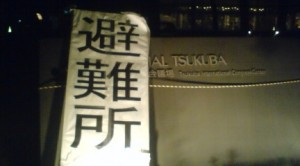 In the weeks following the eathquake,tsunami and nuclear accident of March 11, 2011 thousands of refugees flooded into Tsukuba. They were given short-term shelter at the Tsukuba International Conference Center,as well as at various schools and community centers around the city。There are presently 486 official evacuees from the multiple-disaster (mostly from around the nuclear plant)- some of whom have opened businesses or further enriched our community in some way or another. (The sign above reads SHELTER)

THE PRESENT NUMBER OF EVACUEES FROM THE AREAS AFFECTED BY THE DAMAGED NUCLEAR REACTOR IN FUKUSHIMA PREFECTURE:

There are as of August 13, 2014  a total of 127,000 official Fukushima evacuees now living in safer areas both within Fukushima Prefecture itself or in other parts of Japan.

There are 80,322 evecuees living in area of Fukushima deemed safe.  26,486 are in temporary prefab refugee housing, 46,000 are renting places on their own, 4,895 are in government housing of some sort, and 2,851 are registered as staying at the homes of families,friends or acquaintances.

The prefectures with the most evacuees are presently:

and- Ibaraki: 3,461 ( with 486 in Tsukuba City, according to the City Office, including 10 people who lost their homes in Iwate and Miyagi Prefectures) 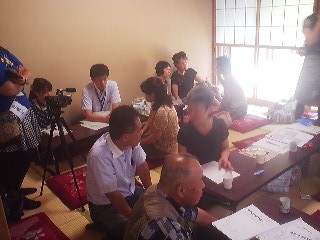 Fukushima Prefecture officals meeting with evacuees from the area around the damaged nuclear plant now living in Tsukuba (September 16th 2014).

One thing that has truly enriched my life here in Tsukuba over the years, is the great diversity of its population (for a city of its size). Besides the JIMOTO NO HITO (the locals) who have lived here for generations – with their distinctive accents, unique folkways, and ( for the most-part) big, warm generous hearts- people who have helped and TAUGHT me so much, there are the 7,000 registered foreigners from over 120 countries (according to the city office). This has made it possible for me to  forge friendships -or at least have some contact – with people from every continent ( I have even met people who have spent years in Antarctica!), and this has certainly helped give me a deeper understanding of the world at large- and provided me with a chance to hear many different sides of the same story. I have also gotten to taste lots of delicious and exotic home-cooking !

But what has really surprised me about Tsukuba`s make-up, and has helped me get a much better than average grasp of this vast chain of islands called Japan, is the diversity of its new Japanese resident population- those who since the 1970`s have been moving here to study or work at the univerisity or the numerous research institutes located here. They have come from ALL OVER THE COUNTRY, and I do not exaggerate when I say that I have been able to make the acquaintance of different people born and raised in EACH of Japan`s 47 prefectures and on many of its small, remote or obscure islands, as well.

Even having grown up in New York City, I can only recall meeting people from a certain number of the American States- and certainly not all 50 ! Of course, those people were there somewhere in the city- those from Idaho, Montana, South Dakota, Wyoming, Arkansas etc. Its just that I never had the opportunity of meeting any in such a vast metropolis! 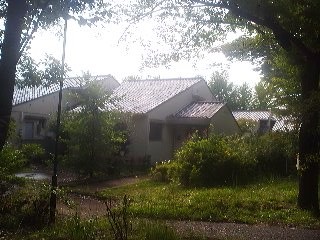 Many of Tsukuba`s 486 refugees from the areas affected by the earthquake, tsunami and nuclear accident of March 2011 are currently living in official housing. Seeing these houses will probably bring back memories to scholars (both foreign and native Japanese) who have spent time working in Tsukuba. Though most of these official houses and apartments are scheduled for demolition- those sheltering evacuees will remain standing until something else can be figured out in terms of future housing.

And while it is true that most of these NEW RESIDENT (SHIN JU-MIN) Japanese are mostly all from the same mold – highly educated scholars or administrators, many with just as educated and accomplished spouses, and that this keeps diversity down, the next wave of immigrants, those who arrived after the completion in 2005 of the Tsukuba Express train line which turned parts of this city into a bed-town for those who work in Tokyo, brought in all sorts of new-comers. Maybe the most interesting might be being the retirees-  old school Japanese with traditional values who keep busy with study, part-time work and involvement in all sorts of activities- those that usual salarymen have no time for or dare not venture into. 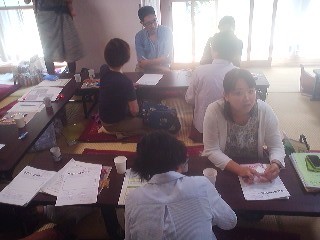 Meeting of Fukushima evacuees at the Teshirogi Public Hall

, So there are the Locals, the Science City people (Japanese and non-Japanese) who have been arriving since the 1970`s, and then the bed-towners and retirees who have been moving in since 2005

But there has been one more influx of outsiders which has added a bit more spice to the sociological hodge-podge of our fair city.

In the wake of the eathquake, tsunami and subsequent nuclear accident of March 11th 2011, a flood of refugees came puring into Tsukuba- filling the schools, community centers and most memorably for me- the International Conference Center to which brought relief supplies several times.

For a few weeks, at least. there were thousands of these evacuees in Tsukuba.

Thogh it seemed to me that the way these people were taken care of was quite good, especially considering that suddeness of the disaster and the large number of people who needed shelter, there were apparently many problems- the worst of which was probably the episode in which city officials (or a city official) demanded that all evacuees be checked for radio-activity before being allowed to stay in the city.

There was also the fact that the time that these poor people would be allowed to stay was very- even shockingly- limited. They had to be out of the schools and public halls within a couple of months of having arrived.

But some did stay- or come later. At present, more than 3 years after the disaster, the are nearly 500 offical evacuees- and if you live and work in Tsukuba you have probably met some. 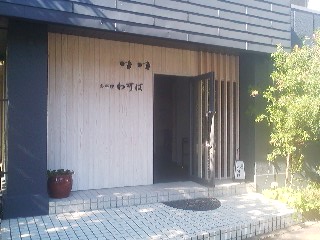 The restaurant WAKABA, run by evacuees from Iwaki City. Friends with much more sensitive palates than I, say that this is the best WASHOKU restaurant in Tsukuba. Dinner is more authentic and more expensive than the daily lunch plate (which goes for as little as 1,000 Yen.

Perhaps they have joined your English class or some other cultural or sport or cultural circle with you. Perhaps you have eaten at one of the restaurants opened by evacuees – two are rquite near each other along NISHI ODORI. One the pizza place near the TAP Swim school, and the other, WAKABA which people much more discerning than myself insist is the best best WASHOKU (Japanese) restaurant in Tsukuba (on Nishi Odori near its junction with Minami Odori- in what used to be the old Cork-heads Bar). Or perhaps you`ve met an evacuee out drinking or playing pachinko- some of them, specifically those who lived near the nuclear power plant get LOTS of money from TEPCO and they have plenty tp spend- which has caused resentment in some cities with significant evacuee populations. 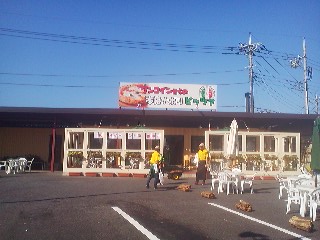 While some evacuees have rented their own places, many of them are living in Tsukuba`s (once abundant) government housing. And despite the fact that most residents of these 40- something-year-old buildings (including many foreign researchers) have been asked to find new digs as soon as possible and leave, the evacuees will apparently be allowed to stay for a while longer- but until when? That is the question.

Questions such as this, regarding not only housing, but health, compensation, and the future of their stipends, the trauma of having had to suddenly leave their homes, many never to return againand most importantly the FEAR OF ADVERSE AFFECTS OF RADIATION that sets the evacuees apart from most other Tsukuba residents.

My awareness of this situation was hightened recently as I attended a small meeting of evacuees livng in Tsukuba- attended by about 20 people who had have left Fukushima either because they were required to do so- or decided to on their own.

This distinction is important in understanding the evacuee situation. Those living within the evacuation area around the nuclear reactor- which at first was a neat circle with a 20 km radius around the reactor, but then changed to a different configuration based on actual radiation data, are given full support and recompense- if you believe what they went through could actually be make up for with cash and a new place to live. 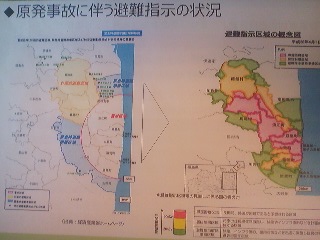 These maps with tiny, illegible captions were distributed at the meeting by representatives of Fukushima Prefecture. The one on the left hand side shows the original Evacuation Zone- a pure circle with a 20 km radius from the reactor. The one on the right hand shows the revised Evacuation Zone- Red is the Dead Zone, Yellow- good for short visits , but no overnight stays, and Green- areas now being prepared for permanent resettlement.

The problem is that those who live outside that zone and this could be only a few meters on the other side of an imaginary line- do not get that same compensation. If they do get any assistance, it is now subject to renewal and will only run through half of next year.

In other words, the people who naturally feel uncomfortable living near to or right on the edge of the Evacuation Zone are not sure if they can keep getting assistance next year.

At the meeting, representatives of the Fukushima Prefectural Government were present and distributed print-outs (with some of the data insultingly small and illegible) with data on the current number of evacuees, their health condition, radiation levels around the power plant, and the palns for the future.

One irritated evacuee asked the government officers if they were encouraging evacuees to move back to Fukushima. One officer apologized and said that meekly asserted that that was not their intention.

Others talked about the uncertainty of their futures, problems at schools- a woman complained that after her child advanced to the next grade she had to go again and explain to the new teacher that classes would have to be missed on certain days for special health-checks, while another man excitedly asked why the data provided on current radiation levels outside the disaster affected areas were compared to those in Aomori and NAGASAKI- “Why did you give Nagasaki as a comparison?” he wanted to know.

Its difficult to imagine the stress of having possibly been exposed to dangerous doses of radiation- it is also stressful to live in a country ( and I guess all countries are the same in this regard) where there are certain people who always look at you and think you are contaminated.

The meeting ended amicably enough, though the evacuees future, or should I say the future of the stipend remains uncertain. About the best thing that the Fukushima Government could tell them that they would still be able to get their local hometown newspapers delivered to them for free even while they lived in Tsukuba.