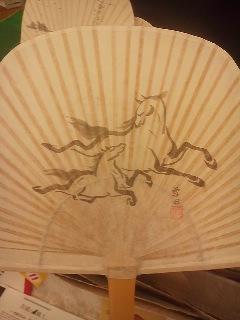 Sesson Fans, produced in Hitachi Ohta City are one of Ibaraki Prefectures great tradtitional crafts. They are extremely sturdy- the MATAKE bamboo used to make them are dried in the sun for ten months. The tough WASHI paper applied to the frame is decorated with ink paintings, in a ribute to the 16th century artist Sesson, who lived in Hitachi Ohta

Fans are surprisingly important in traditional Japanese culture. Not merely used as tools for keeping cool in summer, they were worn and carried as standard accessories by both men and women throughout the year, and have also been essential props used by dancers and actors in the traditional theater and dance. Specially designed fans could even be used as weapons or for sending signals during battle.

It would take quite a long essay (or a whole book) to detail the complex roles that fans have played in Japanese culture over the centuries, and perhaps I will write one in the near future. Today, let us just suffice to say that more than in most of the developed countries in the world today, handheld fans are still used here in Japan for keeping cool- there is always plenty of flapping and fluttering to be seen- as even air-conditioning might not be enough to keep comfortable  during the sultry summers.

They also continue to be one of the more popular souvenirs of Japan both as SENSU (folding fans) and UCHIWA (non-folding fans with a handle). 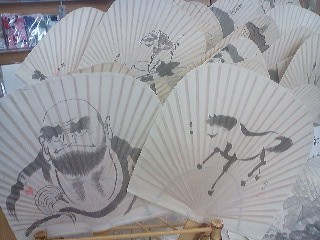 I first discovered (and bought) Sesson fans several years ago on a visit to Hitachi Ohta, a city of slopes in central Ibaraki. I had gone to the area to see the charmingly rustic retirement cottage of the great Mito Mitsukuni (known more popularly in Japan as Mito Komon), but was surprised to find many other memorable sights- including the thatched roof Satake Temple and a beautiful old elementary school building.

It was duriong my meanderings throught he old town that I came upon a shop that sold fans- UCHIWA stye (though squarer than most) adorned with traditional ink paintings.

Despite their hefty price- more than 3,000 Yen at the time, a bought a couple, and have since used them to decorate my walls. 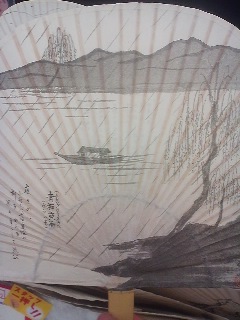 Sesson fans are not cheap- they sell for about 2,500 Yen

Then the other day, as so many other Tsukubans regularly do, I dropped by Joyful Honda, the amazing local hardware-store where they seem to have everything you could ever possibly need for your home (including the kitchen sink). On the upstairs level they always have traditional seasonal items, and I was looking for some wind-chimes ( as part of the research for a forthcoming Tsukublog post) and was surprised to find just next to the chimes, a whole display dedicated to Sesson fans (Sesson Uchiwa). The selection they had showed an even wider variety of motifs than I remembered having seen in Hitachi Ohta and they were also a bit  cheaper than they were when I last encountered them..

If you are at Joyful, check them out under the tingling of the chimes- one of this prefectures venerable traditional products. You might even become a fan. 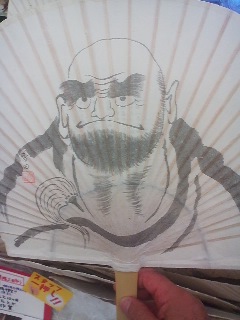